These days, it’s hard to believe that “Pennsylvania 6-5000” is even a phone number at all.

Instead of a combination of letters and numbers, phone numbers in the United States today are seven-digit numbers.

At the start of every phone number, though, comes a three-digit area code.

These codes can be used, in most cases, to find out where someone is calling from.

But what do you do when you’re faced with an area code that has no area associated with it?

Most area codes are tied to a specific city. Area code 855, however, is different. Rather than being tied to a specific city, 855 is a toll-free area code that can be used by callers anywhere in the United States, Canada and several other countries and territories. Since there’s no way to know the caller’s location, you must use an online tool like a reverse phone book or the Somos database to find out who is calling from a phone number with an 855 area code.

What is an area code? 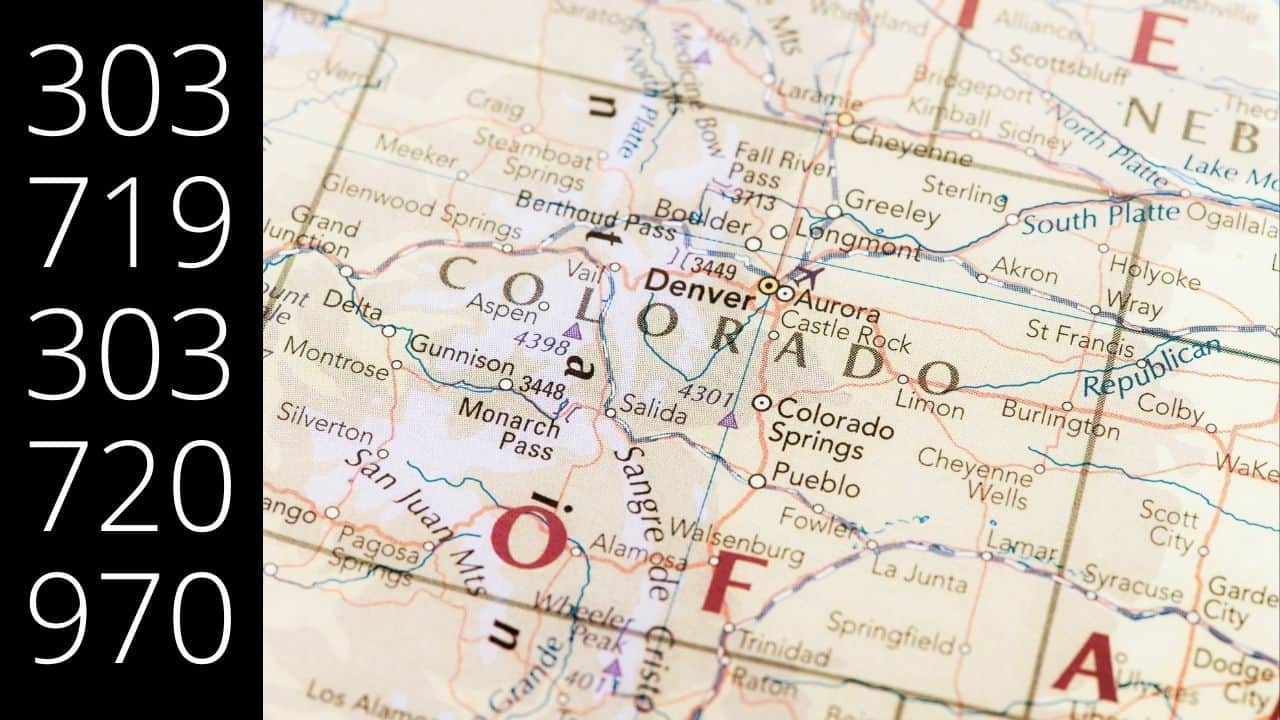 If you’ve ever made or received a phone call using a cell phone, you’ve probably seen an area code.

These three-digit numbers are a type of telephone numbering plan used by telecommunications infrastructure experts to route phone traffic. In short, because there are only so many unique number combinations, an additional three numbers are added to the front of local phone numbers to make sure your call goes to phone number 123-4567 in Oregon, as opposed to 123-4567 in Toronto.

Area codes in most North American countries and territories today use the NANP, or North American Numbering Plan, a three-digit number introduced by AT&T in the 1940s as a replacement for numerous local numbering systems.

Most area codes are tied to specific geographic areas (hence the name ‘area’ code), such as cities, counties or parts of large cities.

This means you can usually guess where someone is calling you from by figuring out their area code.

However, not all area codes are tied to specific places. Some, like 800 and 855, are used as special prefixes.

503 – Most parts of northwestern Oregon, including Portland 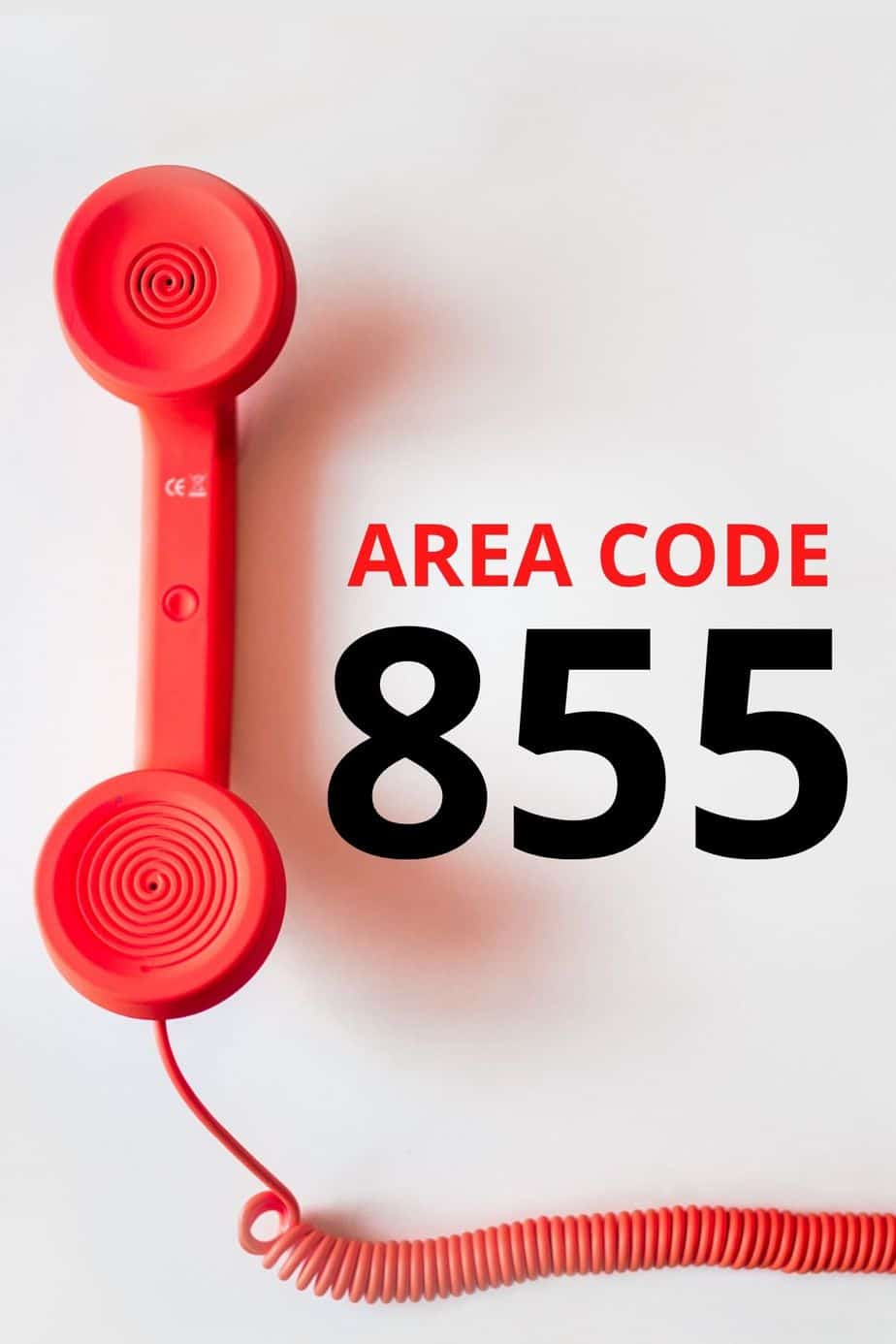 The 855 number is one of those special cases where the area code doesn’t relate to a specific place. Instead, it’s one example of what is known as a “toll free” area code.

Companies and individuals can pay for the ability to use these toll free numbers and avoid forcing their customers to pay long distance fees when calling them from another part of North America.

Long distance fees can add up quickly, and if you’re a large corporation that needs to be contacted by customers around the country, it’s best to get a toll free number. 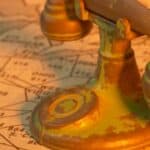 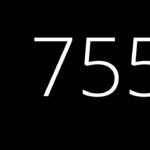 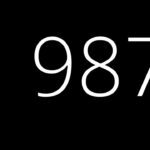 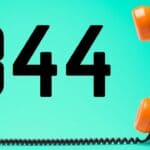 Area Code 844 — Here’s What It Really Stands For

Although the FCC oversees the process of acquiring these numbers in the United States, actual purchases are made through what the FCC calls “RespOrgs” (“Responsible Organizations”), all of which coordinate their efforts through the toll-free phone number administrator Somos.

In short, then, all you can tell from an 855 area code is that an organization or individual has purchased a toll free phone number to use when making calls.

You can’t figure out what part of the country they’re calling from based on the area code.

This is a fictional phone number beginning with the toll free code 855.

This toll free number is used by video streaming service Hulu for various promotions. The letters can be converted to numbers by looking at the number pad of most phones.

The number one at the start of the phone number is used when dialing long-distance to ensure that you reach the correct country. In this case, the United States or Canada.

How can I find out who’s calling me from an 855 number? 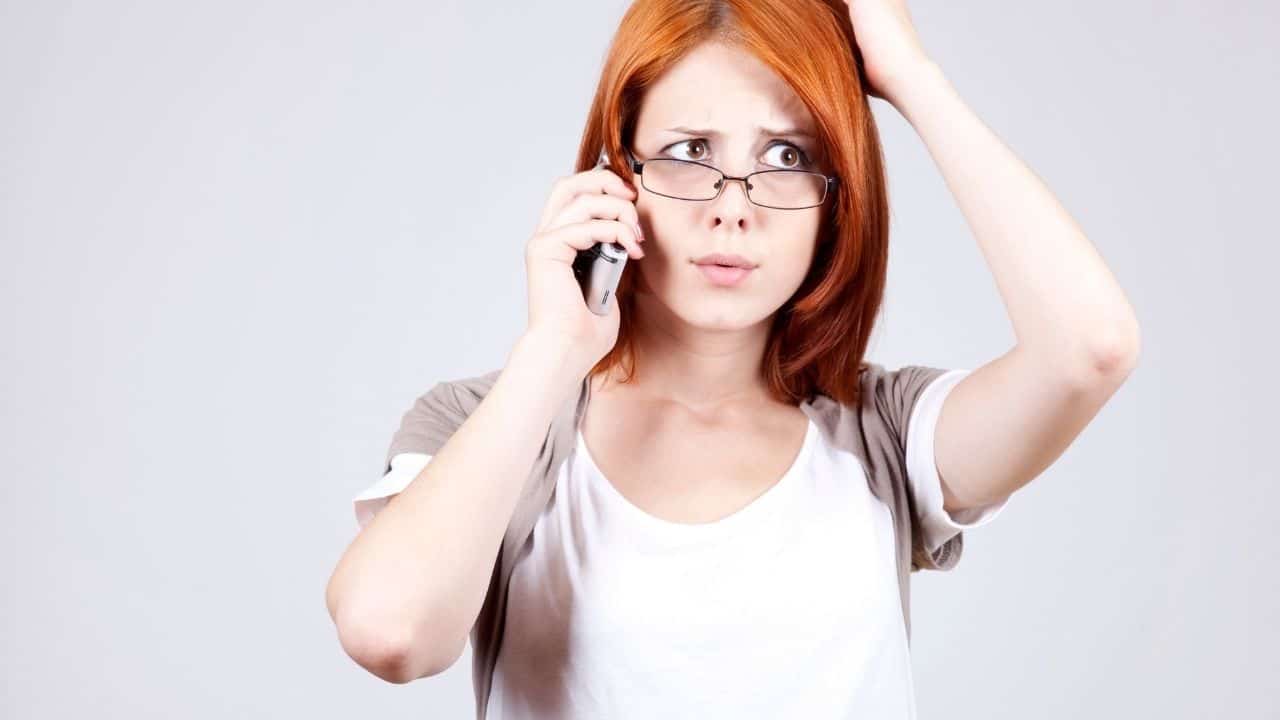 Unlike with most area codes, an 855 number can come from any geographical location within countries that use the North American Numbering Plan.

However, there are several ways you can try to figure out who is calling you, at least if the phone call is legitimate. 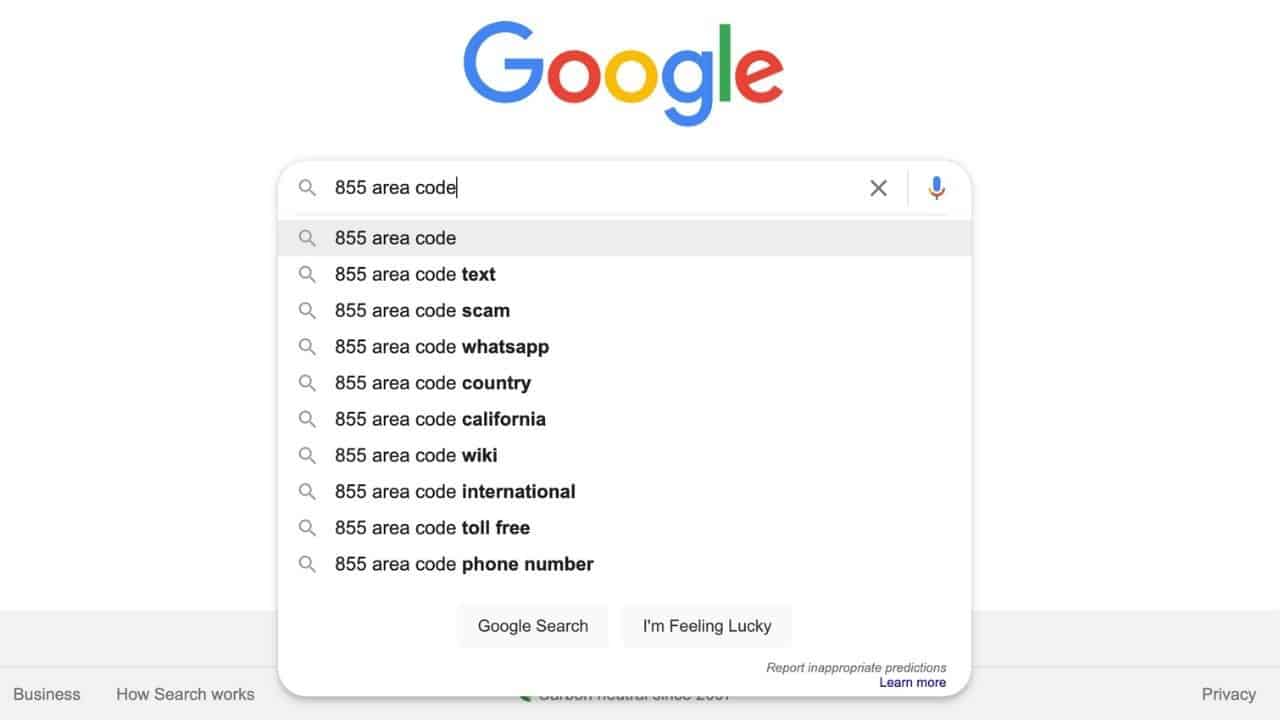 The quickest way to find out what a phone number is for is to call upon Google (pun intended).

Just type in the phone number you’re looking for and hit that search button. If you’re lucky, you’ll get a direct result that shows you the name of the company or person dialing from an 855 number.

While it’s the easiest, this method is also the least likely to succeed.

A lot of 855 numbers may be unlisted, and so many people use this method that there are tons of websites which basically just use random phone numbers as a way to drive search traffic to their web pages so they can collect advertising revenue.

Still, it’s so low-effort that it’s worth a shot!

In a regular phone book, you can find out somebody’s phone number by looking up their name. You can use this method for companies too.

While phone books aren’t as ubiquitous as they used to be, there are now online alternatives which provide the same service more reliably.

Even better, some of these sites offer what’s called a ‘reverse’ feature. In a reverse phone book, you can enter a phone number and see who it belongs to.

Unfortunately, many websites that pretend to be reverse phone books are really just random lists of phone numbers with ads on the side that earn the owners money. Legitimate services typically cost money to use.

Search in the Somos database 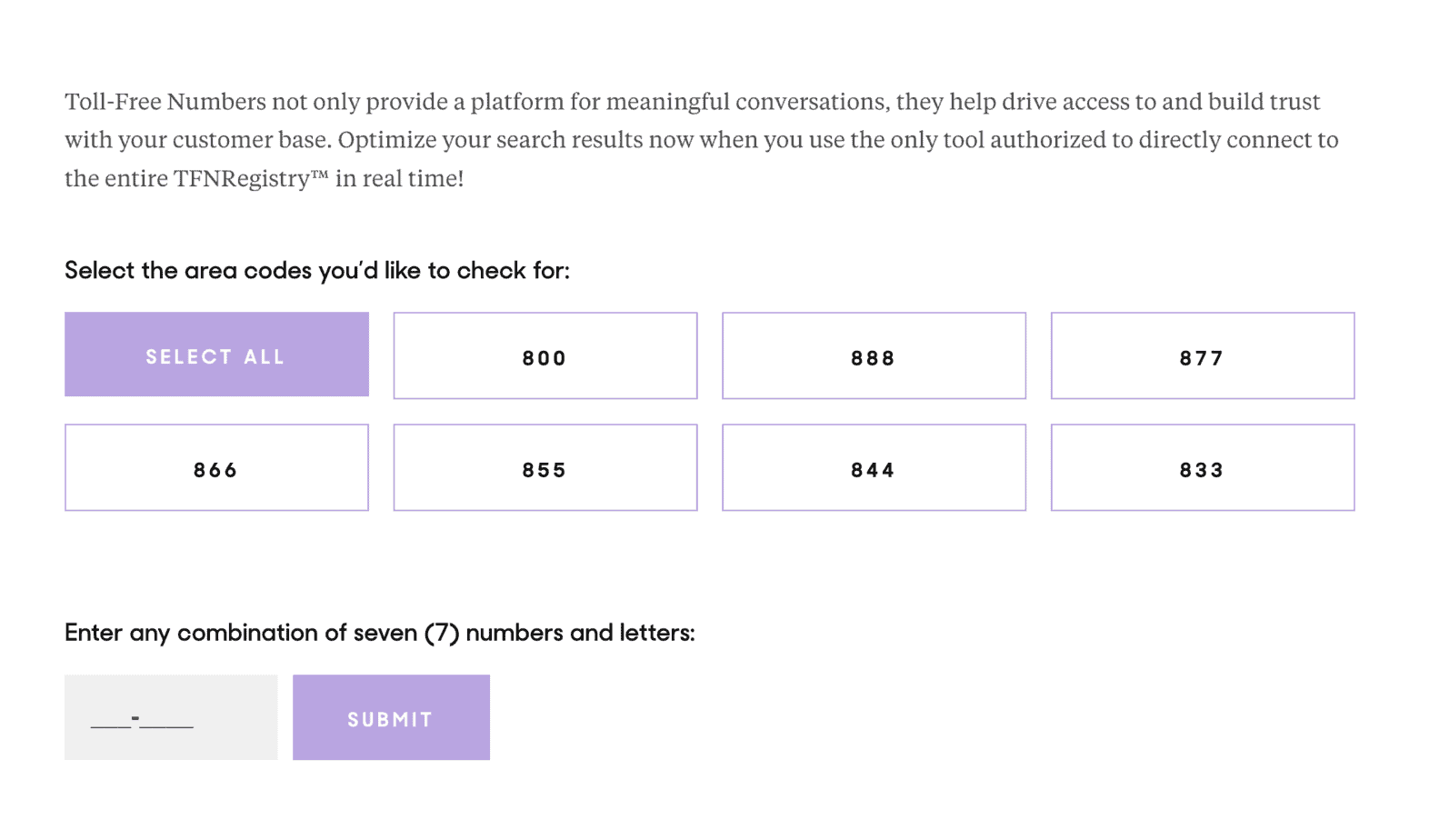 The most accurate method to identify a phone number with an 855 area code is also the most time-consuming.

As the administrator of toll-free phone numbers, Somos maintains a searchable database of 855 numbers.

Even though anyone can search the database, information about the owners of 855 numbers is not available online for privacy reasons.

However, Somos will give you the name and phone number of the RespOrg that provides the specific number you look up to a customer.

Spam calls are illegal in the United States, and the RespOrgs are charged with making sure their customers follow the rules.

If you search for a number and the database tells you nobody owns that number, then you’ve learned something else: you’re dealing with a spam caller who’s spoofing your caller ID.

Modern scammers will often ‘spoof’ legitimate phone numbers. This FCC update from 2016 describes the scope of the problem, where spammers use special software to hide their real phone number behind a randomly generated one.

What this means is that even if you are getting spam calls from a specific 855 number repeatedly, blocking that number might not help.

If the person calling is not the real owner of the number they were using, they can just switch to a new number and continue harassing you.

This is important to remember if you are getting harassing calls. Tempting as it might be to call the number back and get angry, you might not even be getting mad at the right person.

Contacting the FCC at the blog post above to report the call might help in the long term, but in the short term you just have to play whack-a-mole with the spam caller until they get bored or move on.