The use of commas in written English may already seem as clear as mud.

Similarly, cohesive devices such as pronominal adverbs may also make a learner feel like twisting a knife.

Despite being intimidating in nature, the function of commas and pronominal adverbs remains hugely the same which is to logically bind words, phrases, or clauses within a sentence for a smoother transition.

The following sections aim to address a writer or a learner’s trouble relating to the above-mentioned topics.

Is a comma necessary before “thereby”?

To give you a general answer to the question, a comma is necessary before “thereby” when it is used to introduce a phrase or clause entailing the effect of a prior mentioned condition.

She has drunk too much coffee, thereby palpitating erratically.

Conversely, a comma is not necessary when it is inserted within a clause such as in this famous Shakespearean line from the book As You Like It.

And thereby hangs a tale.

What do we mean by “thereby”?

This word is more technically known as a pronominal (relating to pronouns) adverb, whose meaning simply translates to “by that (condition)”, “due to that”, or “with that being said”.

It is used to refer to or substitute another idea located somewhere else in the sentence.

Pronominal adverbs can be usually found in the middle part of a sentence but it could also appear either at the beginning or at the end.

Functionally speaking, it is used to signal the expression of the consequence or result of an action or condition.

The usage of this word is primarily done to avoid the repetition of an idea that has already been contextualized or implicated.

Now, let’s dive a little bit deeper into its morphology, or how the word “thereby” is formed.

How is “thereby” formed?

“Thereby” is a compound word formed by combining the adverb “there” and the preposition “by”.

Referring back to its basic meaning which is “by that”, we can see that it is arranged in the order of preposition (by) + pronoun (that), which is also called a prepositional phrase.

This order is then replaced by the prepositional adverb (by) followed by a locative adverb (there).

Then, the order is reversed into locative adverb (there) + prepositional adverb (by), thereby forming the pronominal adverb “thereby”.

See? I have just used thereby in my previous sentence to explain the effect of the reversal process.

Where can we find other pronominal adverbs?

Pronominal adverbs are more prevalent in Germanic languages and Old English poetry than in modern text or speech.

Hence, these kinds of lexemes may be seen particularly in poetic texts or legal documents such as constitutions, contracts, and patent papers at present.

Here is an example of its usage in the Philippine Constitution.

Article 10, Section 11 of the 1987 Philippine Constitution states that component cities and municipalities shall retain their basic economy and shall be entitled to their local executives and legislative assemblies. Their jurisdiction of the metropolitan authority that will thereby be created shall be limited to basic services requiring coordination.Official Gazette

This means that pronominal adverbs denote a high level of formality which can actually be replaced by more subtle word variations such as that, therefore, and thus, as long as the sentence is appropriately restructured.

She has consumed excessive amounts of coffee, thereby increasing her heartbeats to an unimaginable rate.

She has consumed excessive amounts of coffee that her heartbeats increased to an unimaginable rate.

The other siblings of “thereby” are therein, thereafter, and therewith while its first-degree cousins are hereby and whereby.

To have a clearer interpretation, let’s go over its usage in easier sentences.

“Thereby” and commas in simpler sentences

As mentioned earlier, we could explain an action’s consequence or result using “thereby” in the transition.

In the sentence below, the result of the subject’s action is expressed in an adverbial phrase marked by the pronominal adverb thereby.

We put a comma before it to clearly delineate what happened to the subject as a result of doing a particular action.

We also have to remember that, in most cases, thereby is followed by a gerund (-ing) phrase or clause carrying the purpose of creating a concise thought.

The next sentence is an example of thereby being used in a context that denotes similar meaning to the sentence above.

However, it is already positioned after the coordinating conjunction, “and”.

Cases similar to this do not require a comma as the distinction of the cause and effect is already coordinated clearly by the conjunction used.

She had consumed too much coffee and thereby increased her heart rate to 105  bpm.

Let’s have a look at another scenario that does not necessitate a comma with thereby.

Here, an essential adjective clause is added to emphasize the context which would then denote the outcome in the latter part of the sentence.

Thereby appears after the linking verb “are” which is a relatively common way of inserting adverbs in sentences.

Again, the purpose of using thereby is to refer back to an already-implicated idea while introducing the consequence or result at the same time.

Lastly, let me show you a sentence using thereby at the beginning of the sentence which means that the writer is more interested in highlighting the condition affecting a particular result.

Since the first clause is subordinate to or dependent on the second one, a comma is required after it.

However, we do not put a comma before or after thereby and its insertion in the clause is also optional.

Thereby can be omitted and the sentence could still function perfectly.

Being thereby exposed to classmates who love coffee, Amelia has also become highly dependent on it. 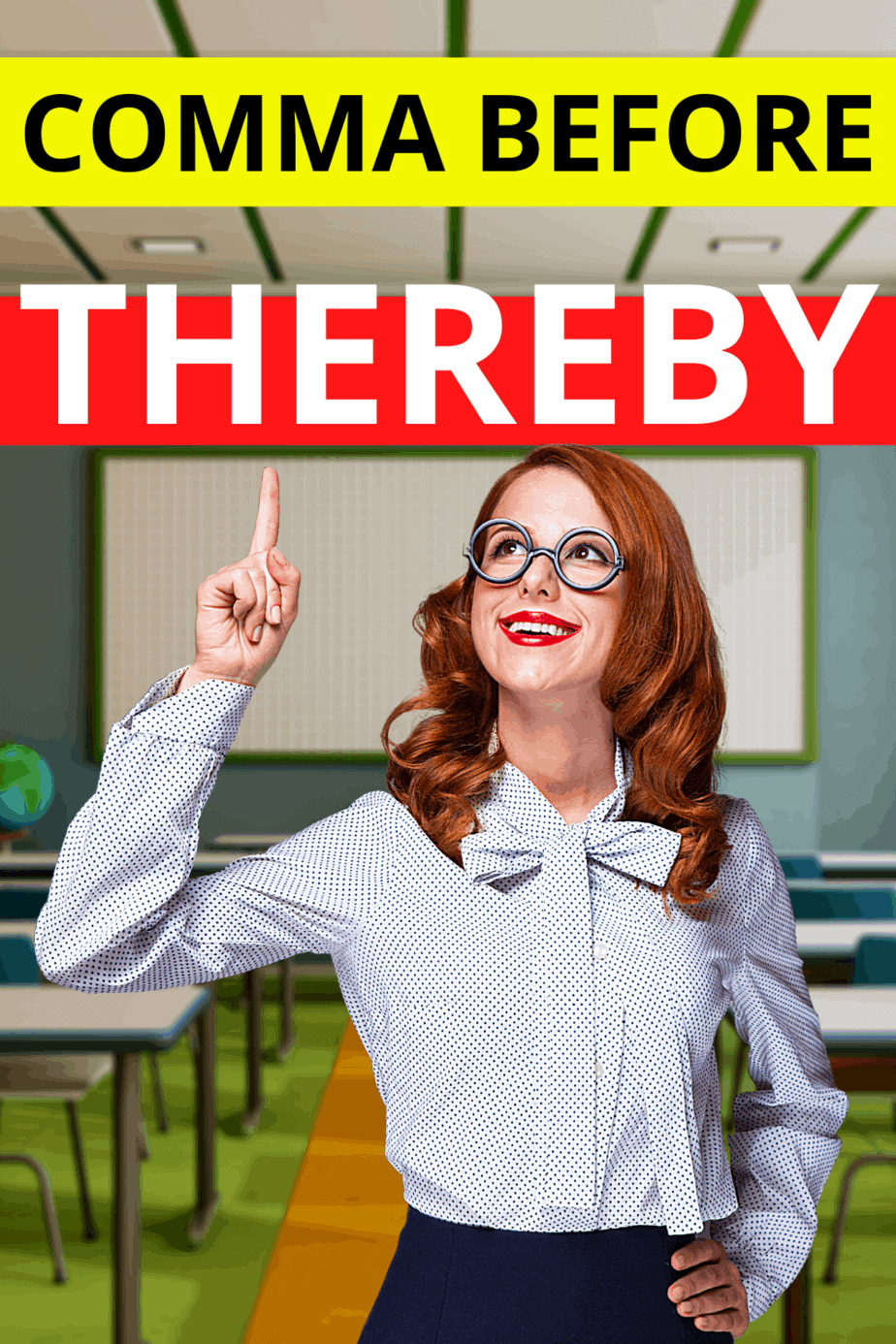 Although having the intent to use these strategies undeniably represents writing flexibility, their misuse and misapplication could also lead to perplexity.

Thus, understanding the context and implication is more important than over-relying on transliteration.

With these, I’d like to end this post by stating that one has to avoid using complicated words in everyday conversations unless we are trying to pass an IELTS writing exam, writing legal documents, or improving poetic content.