Some words are more common than others. Others just sound cool.

No matter whether a word is as typical as “and” or as unusual as schadenfreude, however, one thing that doesn’t change is commas.

That’s because, contrary to popular belief, what determines the rules for comma usage is not the word itself but the part of speech it fills and its role in a given sentence.

As an example, let’s take a look at a somewhat uncommon word, “whereas.”

Do you need a comma before “whereas”?

However, you should never use a comma after “whereas,” only in front of it.

Comma rules for “whereas” in more detail

The other consideration with “whereas” is how and where to place a comma.

The rule for subordinate conjunctions is simple, fortunately. Whenever you use one, you need to place a comma in front of it.

That means any time you feel like showing off with this word, you’ll need to use a comma before “whereas.”

Of course, this only holds if “whereas” is in the middle of a sentence.

If you are splitting your clauses into multiple sentences for effect, you obviously should not place a comma before any of the words in your sentence.

Note that in some contexts, like on a school paper, splitting a subordinate clause into its own sentence may be considered ungrammatical.

In other places, though, like in a short story or poem, you can probably get away with it.

No matter where you place “whereas,” though, it’s important to note one more thing.

You should never place a comma after it. (Of course, this is only true if there isn’t something else in the sentence calling for a comma.

If you have a nonessential digression right after “whereas,” for instance, a comma may well be warranted.)

To rephrase that using the word itself to show contrast: When a subordinating conjunction is in the middle of a sentence a comma must precede it, whereas at the beginning of a sentence no comma is used at all.

“In my neighborhood it rained all afternoon, whereas Julie insisted she didn’t see a spot of rain all day.”

Here, a comma is used before “whereas” because it is a subordinating conjunction placed in the middle of the sentence.

“After I served them serrano peppers, my father spent all evening complaining about his stomach. Whereas my mother was thrilled.”

Here, on the other hand, “whereas” appears as the first word in a sentence and no comma is used.

This example makes it pretty clear why some teachers may not like “whereas” used at the start of a sentence.

Even more than “and” or “so,” something as unusual as “whereas” really stands out. 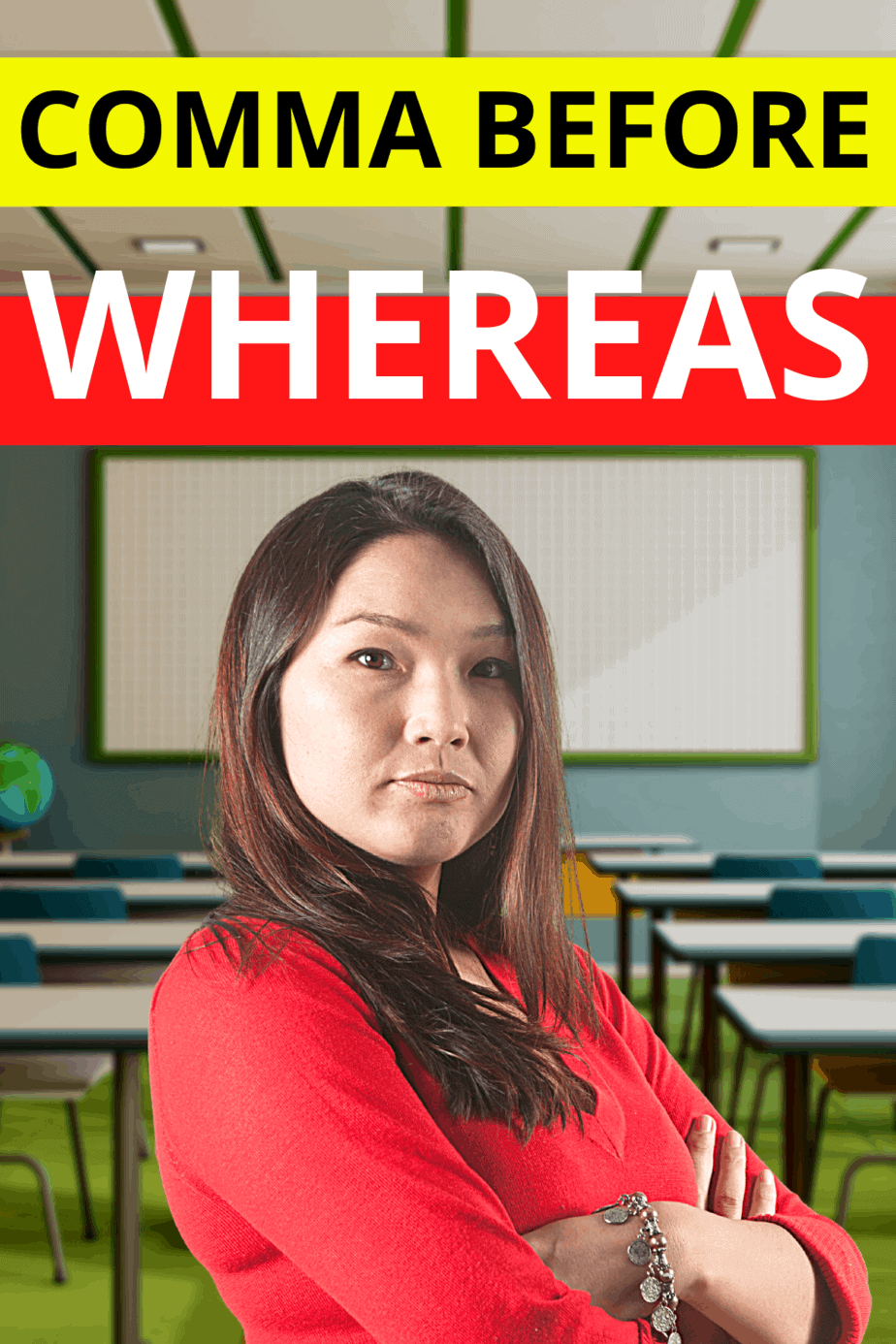 The word “whereas” is fairly uncommon, and most people will encounter it rarely.

Depending on context, “whereas” has two meanings. The first of these is roughly the same as “on the other hand,” and in this sense the word can be used in a regular conversation.

Sometimes, you will also see “whereas” used in legal or very formal writing. In this case, it means something like “considering the following.”

However, because this use of “whereas” is even more rare, this article will talk only about the first meaning unless otherwise noted.

No matter the meaning intended, “whereas” is a conjunction, a type of word used to connect two clauses in a sentence.

A clause, to quickly review that point, is a grouping of words in a sentence that contains a subject, a verb and, optionally, an object or other argument.

Specifically, “whereas” is a subordinating conjunction. That means it is used to connect a dependent clause to a main clause in a way that shows their relationship.

In other words, a subordinating connects a group of words which shows an incomplete idea to the other, more important clause in a sentence that helps complete it.

With “whereas,” the connection between the two shows that the subordinate clause either contradicts or builds upon the main clause.

“Whereas” in a legal document

One place the word “whereas” frequently appears is as the preamble, or introduction, of a legal document such as a will, contract or the Constitution of the United States.

In this kind of document, “whereas” has a slightly different meaning than usual. Rather than acting as a synonym for “but” or “although,” in legal writing “whereas” means something closer to “since” or “because.”

While the legal “whereas” follows the same rules as the kind of “whereas” you could use in normal language, there are a few differences between the two types other than the meanings.

Legal “whereas” is usually part of a list, where it’s used to enumerate multiple legal clauses (such as the parts of a contract). Interestingly, and contrary to normal capitalization rules, the word is frequently in all caps in a legal document.

Although this seems strange, since the purpose of the “whereas” here is to clearly differentiate between things that might have a legal consequence, it makes sense.

The comma rules can vary slightly as well. Legal writing follows its own rules that are too complicated to go into here, but the short version is that in legal documents “whereas” is more likely to be separated by a semi-colon and the word “and” than by a comma.

Mainly, this is because the legal clauses it separates can be as long as several paragraphs.

This is a portion of a real document in the public domain, a health insurance-related resolution from the city of Greenwood, Indiana.

There are several more clauses, after which the actual resolution is written.

Basically, all the clauses preceded by “whereas” serve to set the stage for what the document is presenting to the reader.

Although it looks pretty strange, this is standard usage in a legal context.

Generally speaking, though, unless for some reason you’re writing the preamble to an official document, you should always put a comma before “whereas” if it appears in the middle of a sentence.

Using “whereas” in a sentence

So what do you do if you want to break out “whereas”?

To be honest, the best answer is probably “don’t.” Because this word is a tiny bit archaic, people may look at you strangely if you say it out loud.

In some formal written contexts, though, it can be useful to know how to use “whereas” in a sentence.

Since “whereas” is a conjunction, it needs to follow a main clause and precede a subordinate clause.

If there’s another, different idea you want to contrast with that main clause, then that second idea is your subordinate clause.

Because “whereas” is similar in meaning to “but” or “however,” you also need to make sure that the two ideas oppose one another somehow.

“Julie said it would rain, whereas the weather forecast called for a sunny afternoon.”
“My father hates spicy food, whereas my mother adores it.”

These two sentences show how odd this word can look in casual conversation. In both places, the word “but” would sound more natural to listeners today.

Old-fashioned sound aside, though, both these sentences are technically correct uses of “whereas,” showing the contrast between the two ideas.

In the first example, the main idea is “Julie said it would rain.”

This idea stands alone, making it our main clause, whereas the clause “whereas the weather forecast called for a sunny afternoon” is not a sentence by itself, and is thus our subordinate clause.

Notice how “whereas” was used in that description to show the difference in the two clauses?

Once you know how to use it, “whereas” is pretty useful.