Next in our long line of reviews of Japanese learning materials is Rocket Languages.

If you’ve spent time (like me) furiously googling around for answers to your various questions about Japanese, no doubt you’ve stumbled on some of their stuff before.

What a lot of people don’t immediately realize about them is that they actually offer full courses! In fact, they offer courses in not just Japanese, but also:

Of course, in this space, we’ll be discussing their Japanese course.

So, what’s my broad view of the program?

If you are totally new to Japanese, Rocket Language could be a good place to start. If you consider yourself an auditory learner and prefer a slow, methodical approach, then this course may be ideal.

Rocket Japanese has many distinct features (over a dozen, by my count), a few of them truly unique to the platform that offer something hard to find elsewhere.

In the next few sections, I’m going to break down what all these different features are and how they can benefit you.

Features of Rocket Japanese: The Structure

The bulk of Rocket Japanese is broken down into “modules”. For level one, you get seven modules, plus a “survival kit” (more on that later).

Each module is itself broken down into three sections. These are “interactive audio lessons,” “language and culture lessons,” and “writing lessons.”

These lessons are in turn broken down even further by sections, each offering its own topic to teach you about.

That’s the meat of the course.

There’s also a points system, a leaderboard, a forum, and a whole series of tools. I’ll be breaking down each of these pieces of Rocket Japanese’s course so you can see if it fits your needs.

The core feature of Rocket Japanese is its focus on audio lessons.

These are professionally produced and feature native Japanese speakers, meaning you’re getting the best possible exposure to the Japanese accent and the accent you’ll want to emulate.

Each module has four or five of these interactive audio lessons, totally thirty. These lessons range from 15 to 40 minutes in length.

They’ll usually have a bit that’s presented in very comfortable to understand English (perfect for people who speak English as a second language), and then move into a discussion of the Japanese language that they want to cover, as well as a dialogue.

In these dialogues, you’re encouraged to speak along with the conversation, to help get you in the habit of speaking natural Japanese.

That’s the first part of the lesson, which works almost like a podcast. And, like a podcast, you can download the audio to listen to when you’re offline.

After that, you’ll see a section called “Play It!” where you can listen to a simple dialogue, and play as either of the participants.

When it’s your turn, you’ll speak into your microphone and the software will analyze if you pronounced the words correctly.

This helps you get comfortable speaking real, natural Japanese, just like you were talking with a native!

One nice feature of this speech recognition software is that you can adjust its sensitivity.

So, if you want it to be more or less strict with you, you have that option available to you.

This is where they go into details and break stuff down.

This is where you’ll see discussions of grammar, like particles and conjugation.

This is also where you’ll learn how to put together your own sentences, and, importantly, how to apply what you’ve learned in real Japanese settings.

At the bottom, they’ll have a box with a bit of cultural information as well. For example, module five has a section about the cultural importance of cherry blossom traditions.

A really nice section of each module is the writing portion. To start with, they’ll take you through writing all of the hiragana, followed by all the katakana.

The hiragana is split across ten lessons, and the katakana gets its own ten lessons, so no worries about getting overwhelmed with too much new info at once.

They also dedicate a lesson to the combination of the kana and the unique sounds they make.

Each of these kana lessons comes with a quick video that shows you the character being drawn (I wish it was a gif, actually, so it would just loop, but otherwise the videos are a nice touch).

They then show you several words you can now read using just the kana you’ve already learned. I think I like that feature of this section the best.

Finally, in module five you get to learning kanji. I didn’t count up all the kanji they have you learn, but suffice to say it’s quite a few.

They carefully show you how to write each character.

In fact, they go further than that. In their little applet, they both have a little feature that demonstrates the stroke order of each kanji, but it also allows you to draw it yourself using your mouse (or finger if on mobile).

As a nice bonus, there’s also a little score-keeper there, so you can see just how close to perfectly you wrote the character.

Following that, they demonstrate the onyomi and kunyomi (the different readings of the kanji), as well as words you can learn that use only characters you’ve already learned (again, something I really like). 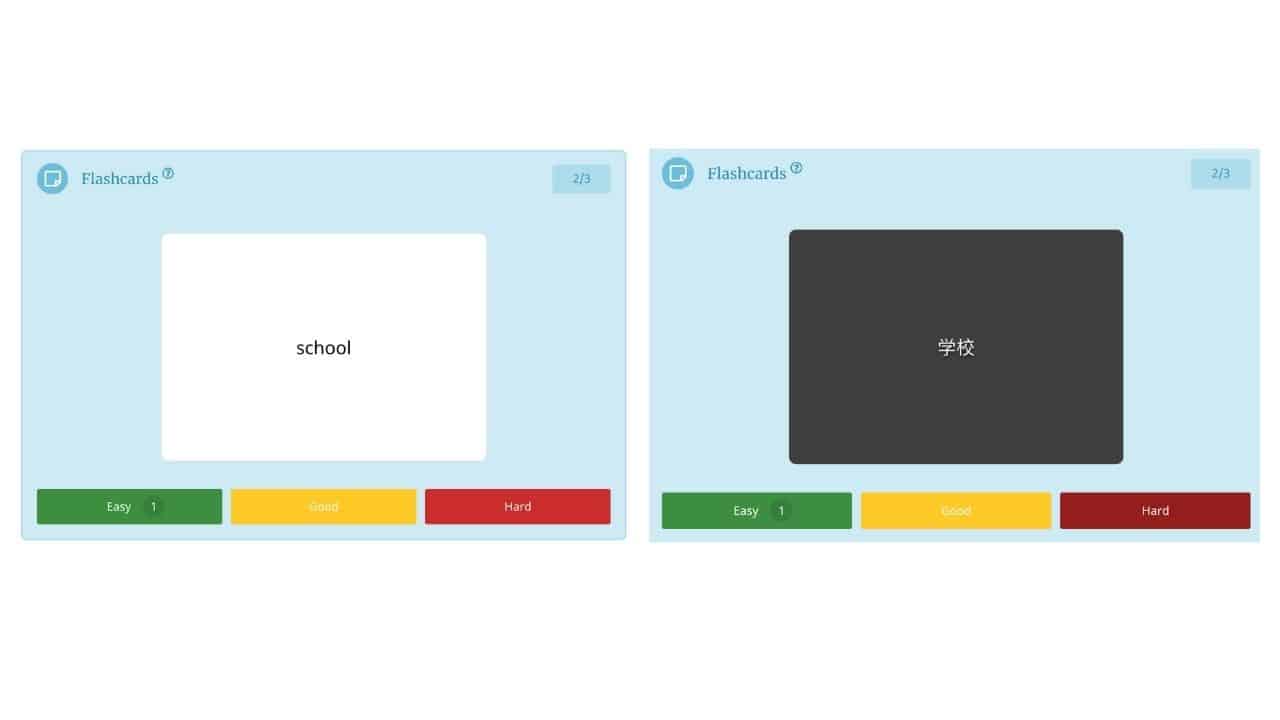 At the end of every lesson, there’s a series of four “Reinforcement Activities.”

According to Rocket Languages, these are all designed to remember the parts of the language that are giving you difficulty and to focus on those parts especially.

I imagine that something like an SRS (spaced repetition system) is being used, although I don’t know for sure.

The first one of these activities is flashcards. This one’s pretty self-explanatory.

You get a few options, like if you want to test English to Japanese, or vice versa, and if you want audio to play when you reveal the card. Simple, straightforward.

Next up is something somewhat similar, but designed specifically to train your ears and tongue. This activity is called “Hear It! Say It!” and will only say the word to you.

No kanji, kana, or romaji hints for you! You have to think of the word and mark if you got it right or wrong. Then you can record your voice, and get your pronunciation tested.

Next up is basically the same thing in reverse. They show you the English word. Then you record yourself saying the Japanese word you think it corresponds to and mark if you got it right or wrong.

Finally, we get to the quiz section, where they hit you with a number of multiple-choice questions, designed to test how well you understand things like particles, conjugations, and complete sentences.

After the Reinforcement Activities, you get to the extra testing area.

Down here is a sorting activity, that will show you an English word and then a mix of kanji and kana that you need to arrange to make the correct word. 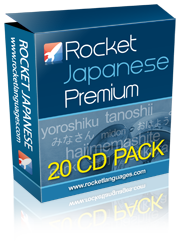 I have to be honest: these lessons feel a little tacked on. There’s nothing wrong with them, and you’ll certainly get value from them, but they’re not as well considered as they could be.

I’ll elaborate a little further down, but this is just here to say that if you want a language “survival kit” that could function like a phrasebook or something that would properly get you ready for a trip, this ain’t it.

That said, the survival kit section is broken down into 10 individual lessons, putting a focus on numbers, food, telling time, and more. 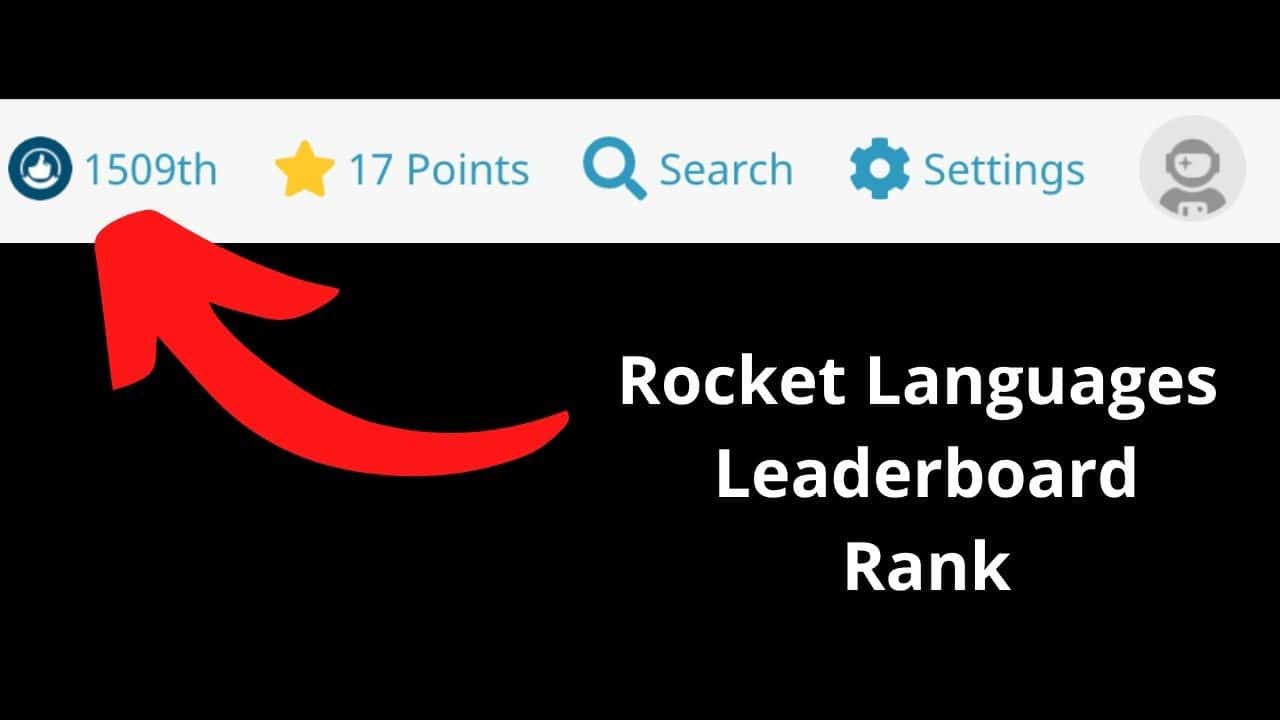 Rocket Languages has certainly not let the gamification train leave it behind.

At the top of every page, you’ll see your rank on the Rocket Languages leaderboard, as well as your total number of accumulated points.

If you click into one of those, you’ll get to see all your progress.

That means being able to check out how many points you’ve earned that day (you can set goals that it will check if you’re hitting), see your total points, see your current streak, and longest streak.

Below that is a cool bar chart that shows you your point per day over the course of the last week, month, and year.

Below that you get to see your leaderboard position, both within just your own language, and within all languages.

If gamification isn’t your thing, it’s worth noting that they are planning to add the ability to hide this feature.

So, if you’re like me, and competition just isn’t your thing, they’re planning to accommodate you.

That said, for right now, it’s not particularly obtrusive anyway.

I usually find things like Duolingo’s points system to be extremely annoying, but haven’t found Rocket Language’s system to be very noticeable.

Once you’ve completed every lesson in a module, you can take a test that quizzes you on your knowledge of what you learned.

Once you pass all the tests (there are seven, each taking about 30 minutes to complete), you get two perks!

The first is that you get a nice little certificate that you can print out. Nothing crazy, but a nice acknowledgment of your success.

The second is the knowledge that your Japanese level is sitting at around the CEFR A2 level. If you’ve passed the tests, Rocket Languages says that you’re basically A2!

This is just a long quiz that tells you, roughly, how much of the Rocket Japanese course you know.

I’m not really sure what extra value it offers that the certification tests don’t, but it’s there.

The nice thing is that it keeps a running track of your progress every time you re-take the test.

So, you can see how you’re improving over time by looking at your historical scores as shown on a bar graph on the page.

This one is integrated into the whole course.

If you double click or highlight any word or phrase in a lesson, you can save it into a custom flashcard deck that you can study at your own pace.

Every lesson allows you to save notes about it, and all these notes get aggregated into one space where you can review everything.

This could be a really handy tool. No need to keep pen and paper handy.

No need to open up a Word or Google doc. Just type right into the Rocket Languages app and it gets saved for you. No hassle!

Does what it says on the tin. In the same way you can add vocab to flashcards, you can also mark vocab for special consideration later in a list.

Additionally, these saved vocab words will always end up highlighted anywhere you see them on the site, meaning you can focus your attention on them.

This is a small feature where you can see special deals.

It’s honestly not super active over there.

But, let’s be honest, you’re not paying money to learn a language just to hang out on the forums.

There’s other places for you to do that. So, this doesn’t detract from the course at all.

If you would like to try out Rocket Languages Japanese now for free, please click on the banner below.