According to yougov.com, the TV game show “Jeopardy!” is considered the most popular contemporary TV show, and it also has the enviable position of being the tenth most famous.

Fans of the show will describe it as entertaining, engaging, educational, well-researched, and timeless.

That last descriptor, timeless, carries all the more weight when you consider that “Jeopardy!” has been on TV since 1964 and is still going strong today.

For those of you who don’t know much about this fascinating game show, it is a quiz competition that tests the contestants’ general knowledge.

Contestants are presented with a clue that is formulated as an answer, and they have to figure out the questions that go with these answers.

Now, seeing as “Jeopardy!” is a general knowledge competition, there are several categories in which contestants can get asked. One of the more interesting categories is named “potent potables.” Let’s take a closer look at that category and see what it means.

What is the meaning of “potent potables”?

“Potent potables” is used to refer to alcoholic beverages. On the one hand, “potent” means strong. On the other hand, the word “potable” is used to refer to fluids that we can drink. For instance, “potable water” is drinkable water, and in some countries, there will be signs next to fountains and water coolers that say “potable water,” indicating that the water in the fountain or in the water cooler is good for consumption. However, on “Jeopardy!,” it is used as a euphemism for alcohol, and that makes sense when you consider that alcohol is a drinkable, potable fluid that can have a strong, potent effect on the drinker.

Even in other languages, “potable” is used to indicate drinkability. In French, “eau potable” translates to “drinkable water.”

Anyway, if you put “potent” and “potable” together, you get strong drinkable fluids, which some will interpret as “stinky drinks” or “drinks that have strong smells.” 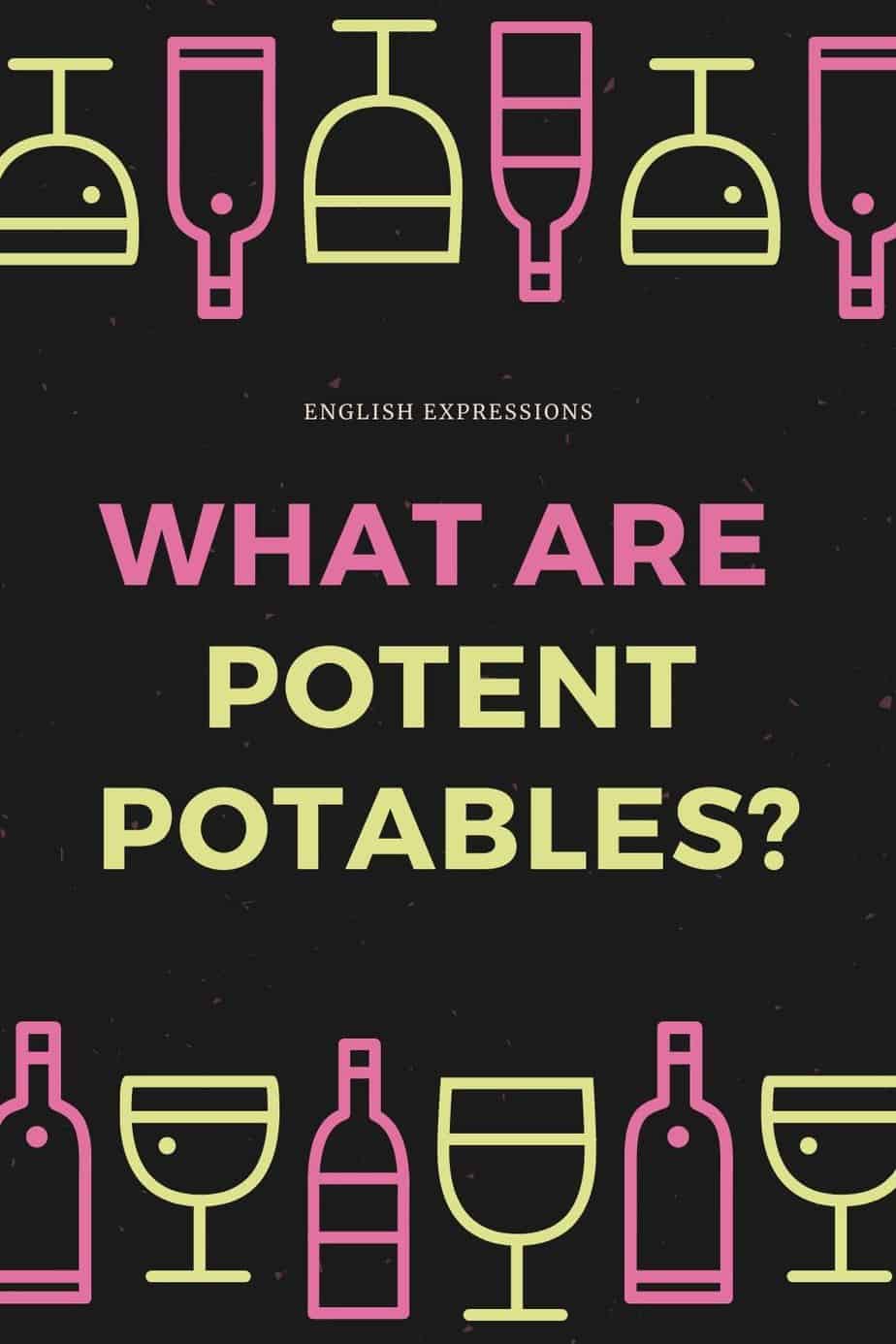 What are some questions that get asked in the “potent potables” category?

Before we look at some of the questions in this category, it is worth remembering that questions on “Jeopardy!” are formatted as answer/ question.

For instance, the contestant will be shown the following phrase.

This Scandinavian Liquor is made by redistilling alcohol made from grain or potatoes.

And, to win the point, they have to give the following response.

Here are a couple of other examples.

White crème de menthe and this liquor put the sting in stinger.
What is Brandy?
You need this liquor to make a Moscow Mule.
What is Vodka?

On a side note, “potent potables” also became a category in the Saturday Night Live skit “Celebrity Jeopardy!,” which parodies the original “Jeopardy!.”

The idea of the skit is that you have a bunch of celebrities playing “Jeopardy!” against one another, and all these celebrities are portrayed as having a below-average IQ.

Interestingly, one of the recurring characters on “Celebrity Jeopardy!” was Sean Connery. Obviously, this wasn’t the real Sean Connery.

Instead, Darrel Hammond played a satirized version of the great man, and it was hilarious. I highly recommend checking it out on YouTube if you get the chance.

Why call it “potent potables”? Why not just “alcoholic beverages”?

Calling alcohol “potent potables” is a euphemism and a form of doublespeak.

There are four main ways to perform doublespeak. You can create doublespeak using inflated language. So, for instance, a company could say that they are releasing “a new and improved version of their product” rather than just saying that they slightly tweaked one of the components.

Another way of creating doublespeak is through the use of jargon. This makes things seem cleaner, and the use of too much jargon can make an individual’s words near incomprehensible.

For instance, the United States doesn’t “torture” its “prisoners of war.” Instead, it utilizes “enhanced interrogation techniques” with “its detainees.” See how that second one sounds more palatable?

A third way of doublespeak is through the use of Gobbledygook. Simply put, this means speaking in an incomprehensible way by being overly convoluted and confusing.

So, instead of saying, “I will see you there at six,” you can say “At the aforementioned place, I look forward to intentionally crossing paths with you right around the time the sun will set past the horizon.”

Gobbledygook is usually combined with other types of doublespeak, including the use of jargon.

The fourth method of doublespeak, and the one pertinent to our case here, is the use of euphemism. Euphemisms are all about making things sound nicer.

So, why use doublespeak in the first place?

Well, aside from obscuring the truth, doublespeak can be used to soften the blow of something being said or to make something sound less negative.

I’d argue that using “potent potables” instead of “alcoholic beverages” makes the category sound more family-friendly, which is something that matters when you consider that the show is airing on TV and can be viewed by children across the United States.

Another factor that makes “potent potables” a better option than “alcoholic beverages” is that it actually sounds better.

There is a certain alliteration in “potent potables” that makes it have a poetic sense, something that is lacking in the far more blunt “alcoholic beverages.”