Some English words have a notorious history of being misused.

For instance, people commonly confuse homophones like “accept and except,” “affect and effect,” and “ principal and principle.”

On the other hand, a pair of words could be confusing because they have similar or related meanings, which is the case with “imply and infer,” “historic and historical,” and “empathy and sympathy.”

However, some words might get misused because people aren’t clear on their meanings in the first place. A case in point of this last category is the word “ambivalent.”

How to use “ambivalent” in a sentence?

“Ambivalent” is an adjective, and it means possessing two opposite feelings about something simultaneously, causing you to feel uncertain about your final position. So, you use it whenever you want to describe a feeling or position of being pulled in two different and opposite directions.

A closer look at how to use “ambivalent”

To see it in action, let’s say someone asked you about a referendum, and you have mixed feelings about the subject. For one, you think that the referendum is much needed and that it has the potential to do some good.

Nevertheless, you also feel that it comes at a bad time and might cause more chaos than order. Ergo, you have both positive and negative emotions, making you ambivalent about the topic.

Friend #1: So, what do you think about the referendum?

Friend #2: I don’t know. I guess I’m ambivalent about it.

Since ambivalent is an adjective that describes having opposing views, it is usually reserved for sentient objects. For example, you can’t say that the table was “ambivalent.”

That wouldn’t make any sense. Also, animals and plants can’t be ambivalent.

However, relationships and attitudes can be ambivalent as these reflect sentient feelings.

The woman expressed ambivalent feelings towards the suspect. She sympathized with him but still felt that he deserved punishment.

Even results and responses can be ambivalent. After all, results, responses, and messages all reflect the attitude of the person delivering them.

When I asked him whether he would like to pursue his graduate studies, he gave me a very ambivalent response.


Where does the word “ambivalent” come from?

The word “ambivalent” came to the English language around the early twentieth century.

It was first introduced to us via the field of psychology when the Swiss psychiatrist Eugen Bleuler used the term “Ambivalenz” in his book “Zur Theorie des schizophrenen Negativismus.”

After that, “ambivalent” made its way to the international scientific vocabulary, which represented a set of words used by scientists from different parts of the globe.

Now, if we take a close look at the word “ambivalent” itself, we will notice that it is composed of two parts. The first part, the prefix “ambi-,” means both, and it comes from German.

Then, the second part, “-valent,” comes from the Latin verb “valere,” which means “to be strong” or “to be of worth.” This is why the word “equivalent” means of equal power or equal strength.

Hence, when you put the two together, “ambi-” and “-valent,” you get a word that means having strong opinions or attitudes on both sides of an issue. 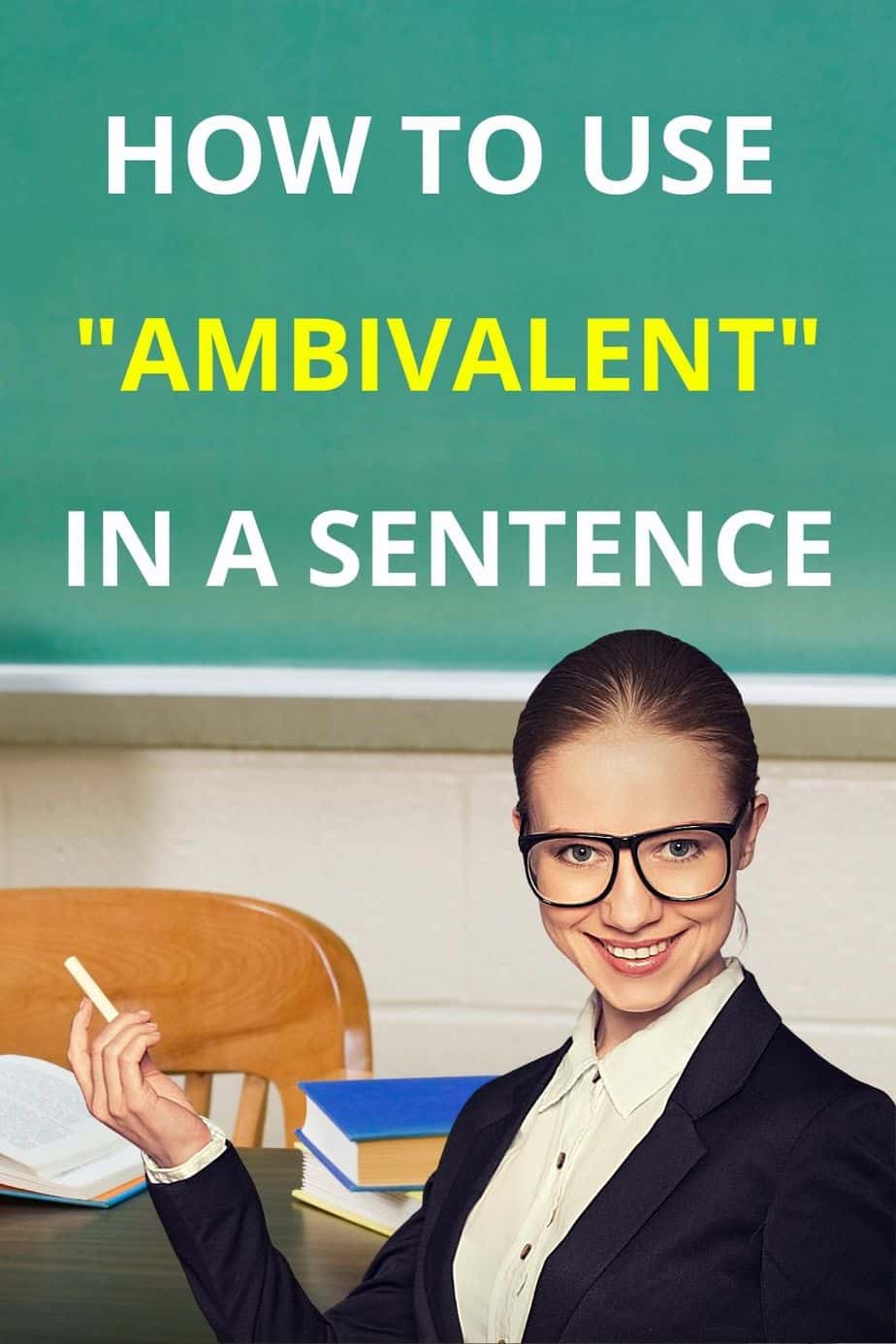 Other forms of “ambivalent”

While “ambivalent” is an adjective, it is worth looking at different forms.

The noun form of “ambivalent” is “ambivalence.” It is the state of having two contradicting opinions or feelings simultaneously.

Even though he would have made an excellent professor, his ambivalence towards the faculty made him wait too long till the position was filled by someone else.

The report’s ambivalence made it difficult for the committee to take any binding actions.

The adverb form of “ambivalent” is “ambivalently.” It means to do something while displaying mixed feelings about the matter.

She spoke ambivalently about her time as a lawyer.

Why do people confuse the word “ambivalent?”

There are a few reasons that can explain why people confuse this word. First of all, its meaning is a bit nuanced, and some people conflate its meaning with a more simplistic word like “indifferent.”

Secondly, “ambivalent” sounds similar to “ambiguous,” and their meanings are distantly related, so it can be appreciated why people get confused there as well.

“Indifferent” is not the same as “ambivalent.” While “ambivalent” means having two opposing views, “indifferent” means being disinterested in the matter, possibly to the point of having no views about it all.

In other words, when you say that someone was “ambivalent” about something, the implication is that regardless of their mixed and confused feelings, they cared enough to form an opinion in the first place.

However, when someone is “indifferent” about something, you are saying that they are apathetic about it.

He felt ambivalent about their proposal.

He had mixed feelings about their proposal. He felt that there were both positives and negatives that balanced each other.

He felt indifferent about their proposal.

He wasn’t moved by their proposal and couldn’t care less about it.

“Ambiguous” has the same prefix, “ambi-,” at the beginning, and this might explain some of the confusion. Yet, “ambiguous” and “ambivalent” not only have completely different meanings, but they also have different histories and origins.

“Ambiguous” made its appearance in English somewhere around the 16th century. And, even though the “ambi-” prefix in “ambiguous” suggests a duality of sorts, the concern here is the duality of meaning.

Put differently, “ambiguous” is used to refer to something that has more than one possible meaning, making it difficult to be certain.

He felt that the politician’s speech was ambivalent.

The above example tells us that the subject felt that the speech was both positively and negatively charged.

He felt that the politician’s speech was ambiguous.

In the second example, the subject is telling us that the speech was so opaque that he didn’t understand it.