There’s an old idiom that goes “In this word, nothing is certain except death and taxes.”

In modern life, we can probably update the saying to read as follows: “In this world, nothing is certain except death, taxes and e-mail.”

Anyone in school, with a job or with family members located elsewhere is probably nodding along.

The prevalence of e-mails also means it’s important to have regulations and standards in place to govern the rules of their creation.

Can you include an apostrophe in an e-mail address?

Yes, you can indeed include an apostrophe or single quote in your e-mail address. You can even include other characters, like the %, the @ sign and even blank spaces. However, e-mail providers don’t always recognize nonalphanumeric characters, so proceed with caution.

Additionally, having too many nonstandard characters will confuse other people. For these reasons, it’s best to avoid apostrophes and other nonalphanumeric characters in your e-mail address unless you have a very good reason to include them.

Who decides how to write e-mail addresses?

What if I told you there was a shadowy group tasked with managing what we connect to on the Internet and how we can access it?

And while IETF is not really a shadowy organization, its members are the ones who develop standards and describe best practices for Internet technologies.

One of those standards, defined in RFC 3696, describes valid syntax for common features of the Internet. Included in that standard is a description of valid characters in the first part of an e-mail address.

According to RFC 3696, any ASCII character (including @, %, # and $) can be part of your e-mail address based on this standard.

To be exact, what this standard actually says is that e-mail addresses with these characters “should not be rejected in filtering routines,” suggesting instead that they are “passed to the e-mail system for evaluation by the destination host.”

Anyone familiar with running a web server can already see where this is going, but before we get into the reasons why e-mail providers might decide to get rid of any nonalphanumeric e-mail addresses, let’s look more at how RFC 3696 deals with apostrophes.

The ‘ is sometimes called a “single quote” in most technical documents.

That makes sense, because while it serves as an apostrophe when applied to actual words, this character can also appear in other contexts.

As noted, RFC 3696 — the document which formally defines what characters are allowed in e-mail addresses — does permit the use of apostrophes.

However, some e-mail providers may choose to filter them out by default or otherwise do strange things with e-mails sent from these addresses. 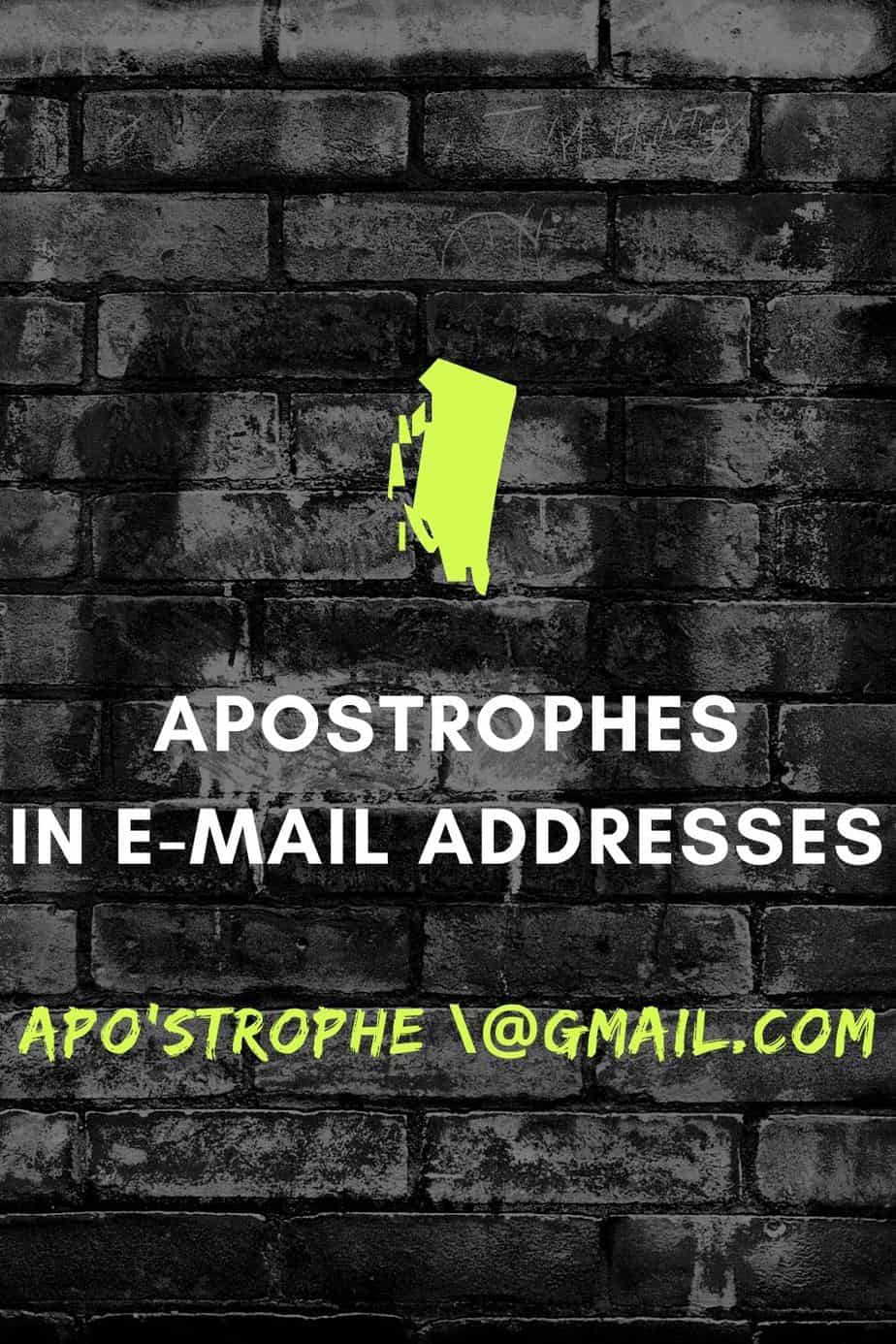 Apostrophes and other disasters

Unfortunately for all you apostrophe-loving e-mail users, there are significant risks involved in allowing people to use special characters in e-mail addresses.

The apostrophe is a particular risk, as it is often used in programming languages to quote strings.

That is, programming languages use the ‘ character to set code that does things apart from words, e-mail addresses and other bits of text.

If an apostrophe shows up unexpectedly halfway through a string such as an e-mail address, it can lead to the program losing its place and acting in unexpected ways.

Attackers can even exploit this problem to insert malicious code, enabling them to delete people’s records or even make copies of them for their own nefarious purposes.

For that reason, programmers and services will almost always make sure to check for special characters and turn them into text in some way.

Not to get too technical, but the name for this in programming lingo is “sanitizing your input.”

If you don’t sanitize input in programs involving some kind of database (and e-mail counts!) some pretty bad stuff can happen.

Any programmer with experience, and certainly any major e-mail system, will know this already.

That means that most major e-mail servers should already have processes in place to make sure apostrophes won’t break stuff.

However, it also means that the potential for risk is big enough that e-mail providers just aren’t willing to risk it.

Alternatively, some e-mail providers use nonalphanumeric characters to do things when receiving e-mails, such as assuming that something in curly brackets or single quotes in an e-mail address is supposed to filter it or move it to a specific folder.

What other characters can you include in e-mail addresses?

However, because of the security concerns mentioned above, some characters must be “quoted,” a coding term meaning set off from the rest of the plain text of the code or address in some way.

There are two ways to quote special characters in e-mail addresses:

It’s worth noting that you don’t need to worry about what quoting means, or how to do it. It’s something that should happen automatically in the e-mail system you use.

Again, e-mail systems are supposed to just pass all these characters along without doing anything.

But that doesn’t mean your own provider, or the one you’re sending e-mails to, won’t do something unusual with apostrophes in e-mail addresses when they get there.

Is it actually a good idea to include an apostrophe in your e-mail address?

Is that a good idea? Obviously, it’s not. How would you ever tell someone your e-mail address, let alone expect them to remember it? For that matter, you’d probably be hard put to remember it yourself.

Of course, that’s an extreme example. A single apostrophe or some other nonalphanumeric character is hardly going to make your e-mail hard to remember.

In short, for the same reason that passwords made up of phrases are easier for people to memorize, it’s better to stick to as many expected characters as you can.

Additionally, it’s important to remember that some combinations of characters like / and \ can lead to unexpected behavior in some programming languages, which might cause problems not only for you but for the entire service.

Because of this, e-mail providers and web servers don’t always accept e-mail addresses with apostrophes as valid and may automatically direct them to spam or even fail to deliver them at all.