According to Wikipedia, the word “and” is one of the five most commonly used words in the English language.

“And” can do a lot of things, and for some of those things, you’ll need commas.

Generally speaking, though, commas usually appear before the word “and” rather than after “and.” If you’d like to read about that, check out our article on commas before “and.”

Do you need to use a comma after “and”? 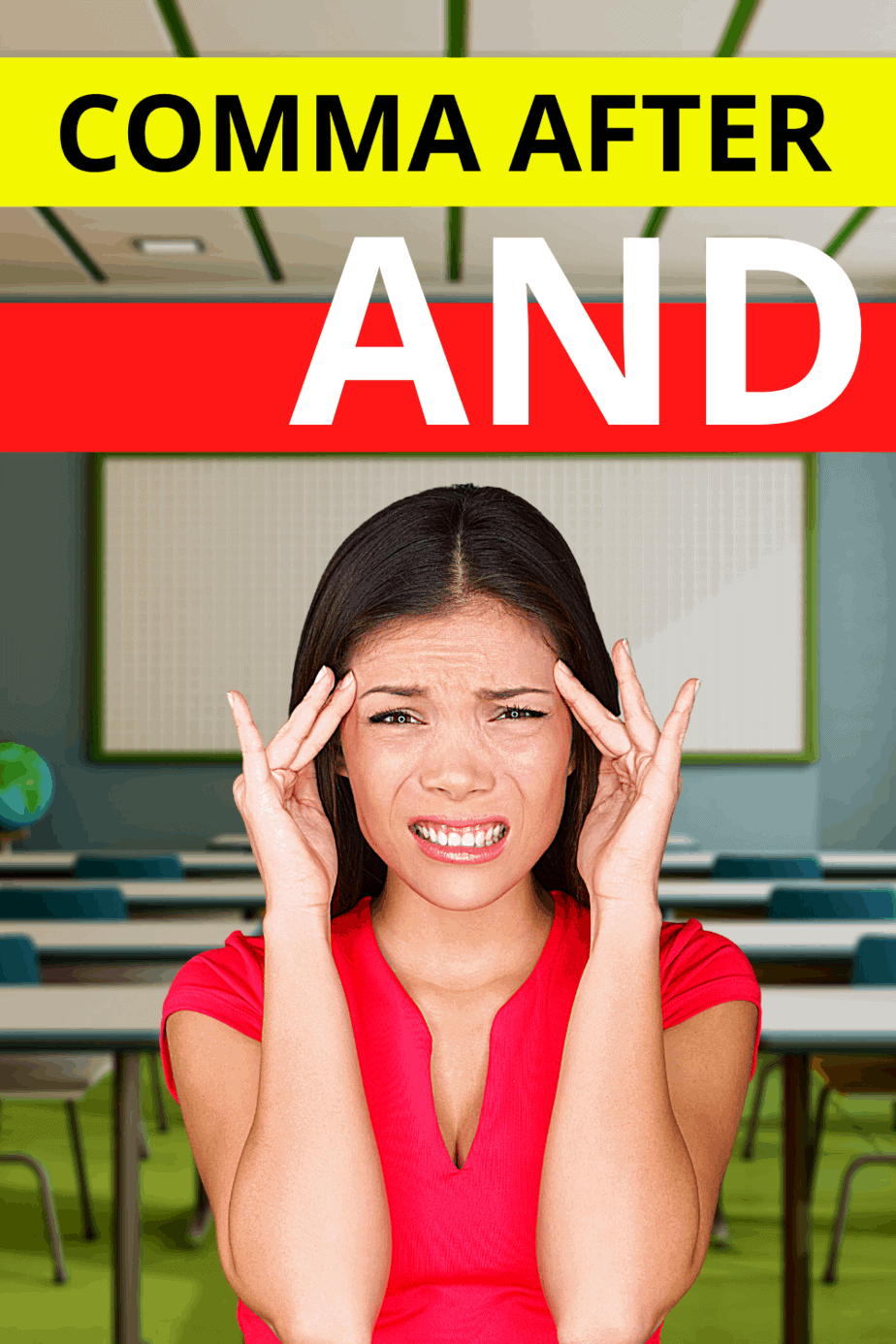 Commas after “and”: when not to use them

The simple truth is that you never need a comma after “and” because of the word “and” itself.

In other words, unless there is some other grammatical reason that a comma needs to appear at that point in the sentence, the word “and” shouldn’t be followed by one.

To drive that point home, let’s look at places where you don’t need a comma after and.

Lists where “and” is in front of the final item

One use of “and” is to connect the final two items in a list.

Typically, you use a comma before each item in a list. When that final list item is preceded by “and” or “or,” though, you run into what’s called the serial or Oxford commadebate.

Whether or not you need a comma in front of that final list item is a seriously contentious issue.

Fortunately, nobody at all thinks you need a comma after the word “and” in a list.

“I like apples, pears and oranges.”
“The man had a tight white shirt, a yellow hat and six pairs of pants.”

When “and” is joining two words, phrases, clauses or sentences

Serial comma controversy aside, the major use of the word “and” is as a conjunction.

That means “and” is used to connect two things in a sentence and show that both are directly related.

In this usage, “and” is endlessly flexible. You can join single words, phrases and even whole sentences.

Some of these other uses of “and” might require you to place a comma in front of the word. Again, though, putting a comma after “and” would be ungrammatical.

“My dog ate my homework, and my cat barfed on my uniform.”
“Never mix hot oil and water. It’s dangerous.”

When you need a comma after “and”

So far, you might think you never ever need a comma after “and.”

Although in most, if not all, cases it’s true that you won’t, there are a few exceptions.

It’s important to point out that these are not because there’s a rule that says “use a comma after and if this happens,” but because there are grammar rules which require commas before or after other kinds of words or phrases, and these can sometimes fall after the word “and.”

So what are these exceptions?

“And” to introduce nonessential phrases

One use of “and” that is a little outside the box is its ability to introduce nonessential phrases, also called parenthetical asides, into a sentence.

A nonessential phrase is basically just what it sounds like: something that isn’t essential to the sentence.

Nonessential phrases are great for adding more detail or flavor to a sentence, and, crucially for our current point, they have to be set off from the sentence using commas.

Again, this is technically because the comma needs to go before the nonessential phrase. All the same, it is a comma that appears after “and.”

“I only wash my hair once a month, and, if it’s a special occasion, sometimes I even use shampoo.”

“if it’s a special occasion” is a nonessential phrase. We can take it out and the overall meaning of the sentence is unchanged.

That means we need to set it off with commas, and that means we end up with a comma after the “and” that serves to connect the two clauses in the sentence: “I only wash my hair once a month” and “sometimes I even use shampoo.”

Comma when “and” is part of a line of dialog

If a character in a work of fiction is speaking, the end of a line of dialog should be followed by either a comma or a period.

If the dialog isn’t followed by a tag like “he said” or “she insisted,” then you need a period before the closing quotation mark. Otherwise, you need a comma.

With the casual speech in fiction, and the way authors place dialog tags to show how each character speaks, this can lead to a comma after “and.”

Technically, the same thing can happen for quotations in a work of nonfiction, too. However, these are less likely to end with “and.”

The insertion of the dialog tag after the word “and” makes it seem like the character is pausing for emphasis.

The comma after “and” would not appear if the phrase “and I’m not joking around” appeared without being separated by the dialog tag. You can think of the dialog tag as a kind of nonessential phrase.

The infamous comma after the introductory “and”

In some texts, you may have also noticed writers using “and” to start a sentence off which probably made you ask whether it is acceptable.

Well, doubting this usage is actually a good sign because it means that you have a rather advanced level of grammatical understanding.

Strictly speaking, using “and” as the initial element in a sentence would make most grammar pedants cringe.

And, it would most likely get a red mark from your research adviser.

There are two main reasons that prompt writers to do it, which is either to cut a lengthy, complex sentence and to replace formal-sounding connectives.

Also, we have to remember that doing so deliberately means that you are stylistically strategizing to match the tonality of a less formal text.

Let’s discuss these instances in detail.

Introductory “and” as a sentence shortener

At times, some of our ideas could get convoluted in our heads that we get driven to include everything in a single sentence.

This shouldn’t be a problem in technical writing as well as in the spoken language, but it may confuse non-technical readers and create an unnecessary “mental lag” when used in texts.

See what I meant? I’ve just consumed three line spaces in expressing my thoughts in the previous argument, didn’t I?

Now, look at the next example to really see what I’m pointing out.

I can’t seem to understand why some writers tend to use “and” at the beginning of the sentence and I am also confused as to why other people would say that this is unacceptable, when, in fact, I see this kind of usage quite a lot.

The entire sentence is a bit of a mouthful, isn’t it?

Cutting it into two parts using an introductory “and” in the second sentence would make it less frustrating to read.

Also, it prevents someone from having oxygen deficiency issues when reading the sentence out loud.

I can’t seem to understand why some writers tend to use “and” at the beginning of the sentence.
And, I am also confused as to why other people would say that this is unacceptable, when, in fact, I see this kind of usage quite a lot.

Introductory “and” as a replacement for formal connectives

As mentioned, we may also use “and” as a less formal substitute to intimidating-sounding connectives like “moreover” or “furthermore.”

This is particularly the case when we want to reduce the formality of the text’s tone, especially when it is intended for the general public.

Of course, “and” is also four letters shorter than “moreover,” which is definitely good for space-saving reasons.

Here’s an example to show these points.

Dylan tried to warn her sister about the ruthlessly brewing storm from afar. And, as he apprehensively rants, Sally, being her usual stubborn self, sailed away without looking back at the harbor.

The example lines above may probably be seen in short stories or novels, which wouldn’t be suitable for “moreovers” and “furthermores.”

Instead, a writer would conveniently use “and” to match the conversational atmosphere of the text that aims to tell a story rather than explain a technical concept.