Writing in English may sometimes put us at the end of our wits.

We may occasionally wish to just become walking dictionaries so we won’t run out of lexical resources.

Words with minute differences in spelling and pronunciation often get us stuck in a spider’s web because we may be prompted to consult either Mr. Webster or Mr. Oxford first, before deciding which one to use.

These linguistic oddities are especially true with homophonic and polysemic words.

Let’s dig deeper into the differences between two homophonic words — words with similar pronunciation but irrelevant meanings — “coma” and “comma”.

What is the difference between “coma” and “comma”?

Coma, the noun version of the adjective “comatose”, is a state of temporary or permanent unconsciousness as a result of medically-related issues such as brain injury, intoxication, or oxygen deficiency. In another sense, it could also mean the hair-like structure of a comet’s head.

On the completely distant part of the semantic spectrum, a comma is a non-lexical written symbol (a punctuation mark) used to alert pauses and guide the rhythm of sentences. It could also refer to a butterfly species in its secondary sense.

Lastly, even if both peripherally sound alike, the first vowel sound of each word is produced differently: coma contains the /oᙀ/ sound as in “boat” and comma bears the /ä/ sound as in “drama”. 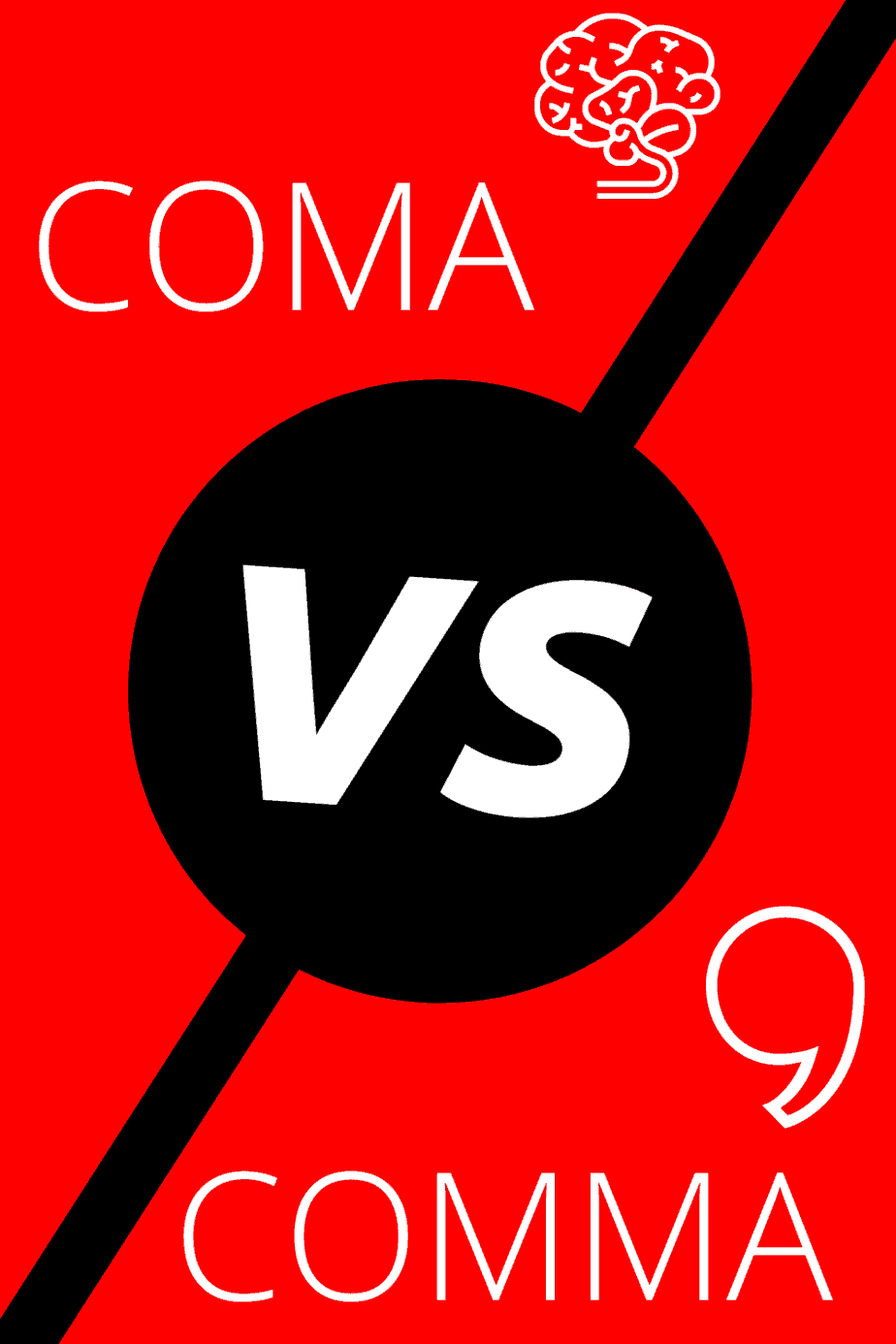 This section aims to shed some light on the origin, meaning, and pronunciation of coma.

In its first sense, the word is mainly used in medicine which means prolonged unconsciousness while it means the hair-like structure on the comet’s head in its second sense.

Note that both of the meanings or senses of coma are used as nouns.

The first sense of the word coma is derived from the Ancient Greek term (κῶμα) which means “deep sleep” and it is restrictedly used in the medical field.

When a living organism goes into a coma, it does not respond to stimuli (i.e. pain infliction) as it would in its conscious state.

The same term also gave birth to the name comet, which is a ball of ice from the outer portion of the Solar System that turns into a fascinating heavenly scene as it travels closer to the sun.

Online dictionaries agree that the first sense of coma was first used in the 1640s while the second in the 1760s.

The initial vowel in coma has the minimal pair diphthong sound similar to the sound we use in “go”, “boat”, and “don’t”.

A minimal pair diphthong is a combination of two vowel sounds subtly blended into one.

The diphthong /oᙀ/ is also generally referred to as the long “o” vowel sound and may also be simply written as /ow/ for more convenient pedagogical practices.

Coma is phonetically transcribed into /’koᙀmə/, following the American English pronunciation, and we may observe the oval to a rounder mouth position during the sound reproduction.

The tongue also moves to the middle part of the mouth coming from the lower portion while the jaw slightly rises upwards towards the end of the entire sound.

The details below address how the word comma has been derived together with its meaning in different senses, as well as its pronunciation incongruity with the former word.

The same as the former word, comma may also be used in two senses which are both nouns.

Meanwhile, the punctuation comma is of Greek origin (koµµα), as well, which denotes the meaning of “a cut-off segment”, later transferred into English through the Latin language.

Commas are used to segregate words, phrases, or clauses which signal short breaks when reading.

Comma usage could either be grammatically or stylistically-based depending on the writer’s intention.

Looking at comma’s second sense, it may also refer to the black-and-brown butterfly species dwelling in Eurasia and North Africa having the ability to camouflage on dead leaves due to its special color combination.

The first vowel sound in comma is produced using the open central unrounded vowel /ä/ similar with the initial vowel sounds in “drama”, “mama”, and “karma”.

The open central unrounded vowel sound is a single vowel produced by positioning the tongue away from the roof of the mouth and closer to the base, while the mouth is fairly unrounded and the jaw drops at the same time.

Comma is phonetically transcribed as /’kämə/ which is technically one vowel sound shorter than /’koᙀmə/ since the latter word contains a blended vowel sound or a diphthong.

To sum, coma and comma, despite having almost exactly the same sounds and spelling, do have a lot of differences, especially in meaning.

Considering the tricky nature of constantly evolving languages, it is but common to find ourselves getting perplexed by word variations and features.

However, it is still advisable, though, that we know how to disambiguate such linguistic irregularities so we can use them in both writing and oral speech with maximum flexibility, thereby leading to effective communication strategies.