Writing could sometimes feel like grasping at straws when we have to decide whether or not to put a comma before or after a certain word.

As perplexing as it may seem, punctuations such as commas are actually fairly easy to use.

Punctuation should become much less difficult, especially if we know our cohesive devices like conjunctive adverbs by heart.

This blog hopes to address these two writing concerns.

Now, let’s go have a look at the notorious comma before or after “also”.

What instances require a comma before or after “also”?

Pretty much all the time, we do not position commas before and after also except for a couple of cases.

When used for rhetoric purposes, such as a parenthetical component, we may put a comma before “also”, particularly at the end of the sentence.

However, when used as a conjunctive adverb, a mandatory comma is placed after it to alert the reader for a quick coffee break.

Anyhow, no commas are needed at all when “also” is used midsentence as an adverbial complement, verb modifier, or as a correlative conjunction.

Using also as a parenthetical element

So which is which?

Both structures are utterly correct but with only a teensy-weensy implicit difference.

The first, which utilizes a comma before also, has been constructed parenthetically.

This means that these writing components wear stylistic rather than grammatical cloaks; thus, they can be left out.

Meanwhile, the second sentence without a comma omits the rhetoric flavor of the message.

Dropping the comma thereby conveys a flat and neutral tone, and does not prompt the reader to emphasize its usage.

Additionally, using also in the above examples is a little bit formal and awkward.

Replacing also with the other equivalent adverb too is more natural and widely-used.

Again, placing a comma before also at the end of a sentence is possible and correct, but dropping it wouldn’t hurt its grammaticality. 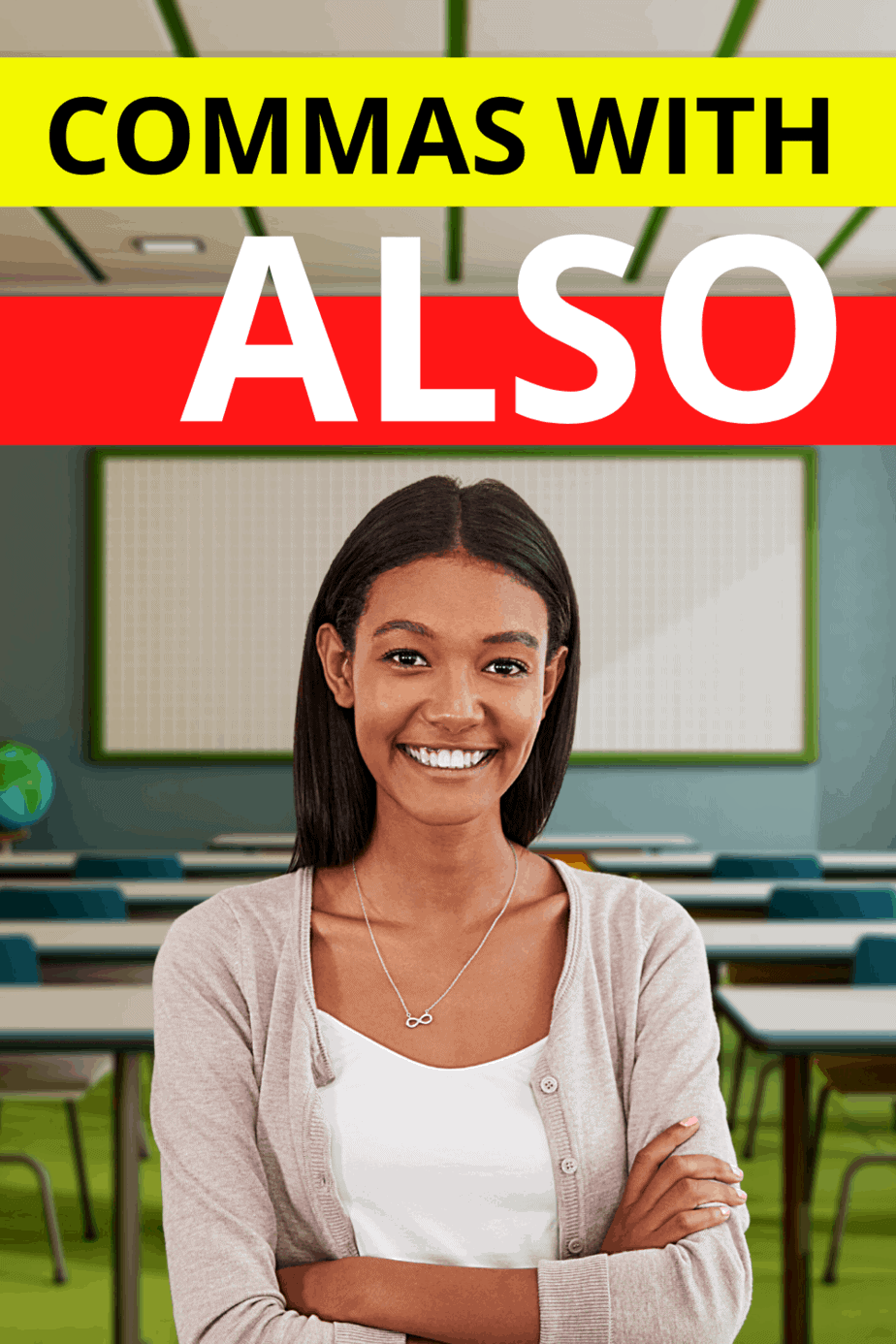 Using also as a conjunctive adverb

Also could also function as a cohesive tool in writing which is linguistically known as a conjunctive adverb or adverbial connector.

More specifically, this adverb is an additive adverbial connector just like similarly, additionally, and furthermore whose job is to supplement relevant details to an idea.

Conjunctive adverbs normally necessitate a comma insertion after them when used to tie up two independent clauses or as an introductory word to a subsequent sentence.

Therefore, this rule applies to “also” every single time it acts as an adverbial connector.

Hey, I got blackout drunk last night; also, I woke up hungover in Phoenix this morning.
I and my wife got as drunk as skunks last night that we didn’t realize driving all the way down to Arizona. Also, I forgot I didn’t actually have a wife.

The role of also as a conjunctive adverb is mainly to add another related idea or topic to one that is already implied.

In oral speech, we could compare also to a nagging wife who just can’t stop talking that her husband wants to bury her alive every time she opens her mouth.

Kidding aside, adverbial connectors are essential in fusing the semantic relationship of ideas within a sentence or paragraph; meanwhile, commas help in transferring the meaning and tone of these ideas to a reader.

Therefore, discourse markers and correct punctuation are of equal importance in writing.

When is a comma not necessary before and after also?

Several cases do not require comma usage with the adverb also such as using it as an adverbial complement, verb modifier, or as a part of a correlative conjunction.

Let me lay them down for you one by one.

Also as an adverbial complement

Adverbial complements are words, phrases, or clauses that are highly essential to the whole meaning of a sentence.

When this information is taken away, the sentence meaning would be incomplete and hard to understand.

If we use also as a part of an adverbial complement, a comma is not necessary at all.

The sentence below shows its placement as part of an adverb-functioning prepositional phrase.

Unfortunately, Lani’s grandkids were also on the boat.

Reversing the sentence is also possible, and the inverted order does not require the comma either.

Also on the boat were Lani’s grandkids, unfortunately.

Verbs do not need the assistance of commas when interacting with also unless intentionally used in series.

Teacher: Give me two verbs and an adverb that start with the letter A?

Student: Sure. Also, abandon, and abduct!

Moreover, verbs often rub shoulders with also, and it is also relevant that we know where to put it.

There are only two primary positions that we have to remember if we do not want to write a clumsy sentence.

One, place also before simple present and simple past verbs.

When she’s in a good mood, she also does the chores.
Yesterday, she also cleaned the attic.

And two, put it after a modal or auxiliary verb.

Also as part of a correlative conjunction

Correlative conjunctions are words that share a symbiotic or mutual function.

They’re inseparable like couples during the first two to three weeks in a relationship.

The most common correlative conjunctions are either...or, neither…nor, both…and, and, of course, not only…but also.

A comma is not necessary either before or after also.

The writer of this blog is not only a dedicated linguaholic but also a passionate DJ.

However, it may go out on a date with “but” when it connects two independent clauses.

She did not only leave her keys inside the car, but she also forgot to lock the house.

Whether we like it or not, writing has always been, and will always be, an indispensable part of communication.

Since we can’t run away from this fact, it wouldn’t hurt if we understand punctuations and discourse markers in detail.

With improved writing competency, we can convey our intention rather clearly, as well as prevent unintentional misinformation.

Written documents also serve as a record of information for future use; therefore, the necessity of learning effective writing strategies is undisputedly obvious.