Commas can be tricky. On top of that, “thus” can be a tricky word.

“Thus” can mean “in this way” or “like this.” It can also have the same meaning as the words “consequently,” “therefore,” and “as a result of.”

Knowing when a comma is needed with the word “thus” depends in part on which definition is used.

Sometimes, whether or not to use a comma is a question of style and not of correct or incorrect punctuation. This is the case with some usages of “thus.”

Figuring out when to use a comma before or after “thus” can thus be tricky, but with a few guidelines in mind, you can figure it out!

Do you need a comma before or after “thus”?

In a sentence with two independent clauses that are joined by “thus,” you need a semi-colon before it, not a comma. You usually need a comma after it.

At the beginning of a sentence, it is usually followed by a comma.

When “thus” introduces a gerund or a gerund phrase, a comma is needed before “thus” but not after it.

In the middle of an independent clause that it is interrupting, “thus” should be set apart with a comma on either side of it if it is a strong break or interruption.

If it is a weak break or interruption, it does not commas.

This is also true when “thus” comes between a helping verb and a main verb. 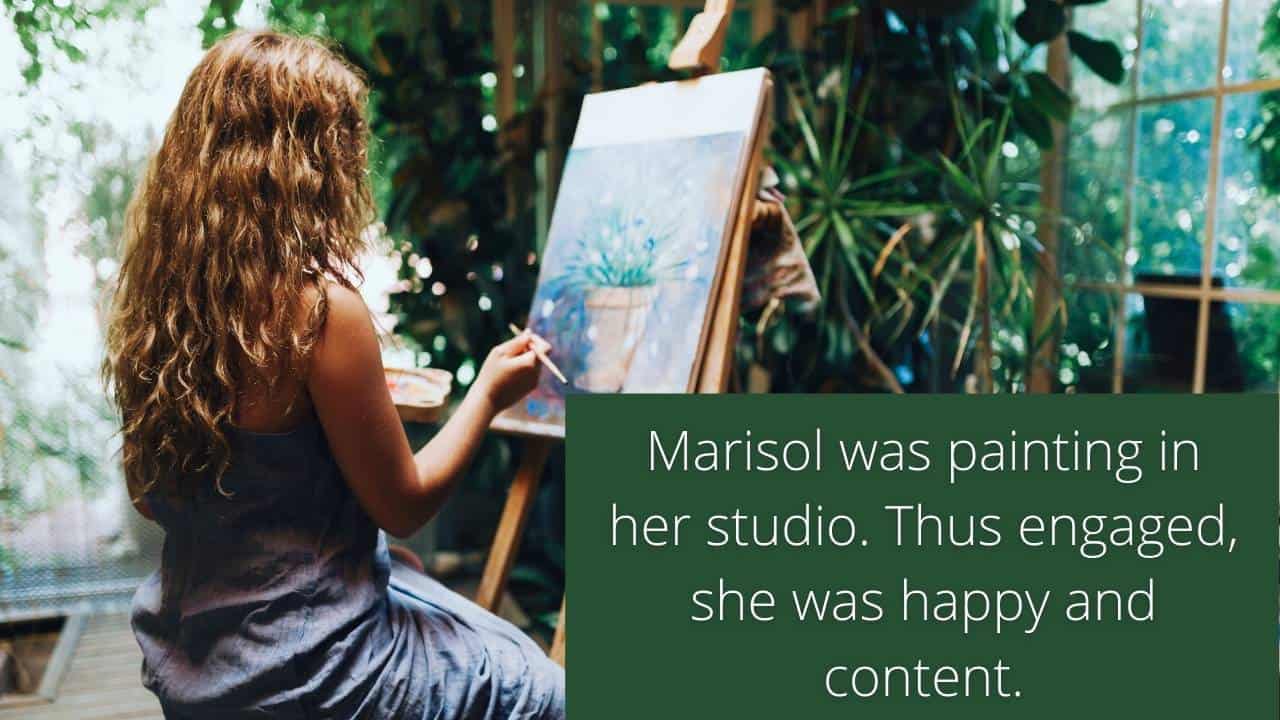 Here are a few examples of how “thus” would be used in a sentence with this meaning. Note that a comma does not come before or after “thus” for this usage:

He became absorbed in the book, and while he was thus distracted, his house burned down.
Harold was studying hard for the test, and thus occupied, he stopped worrying about his friend.
Marisol was painting in her studio. Thus engaged, she was happy and content.

When two independent clauses are joined by “thus” 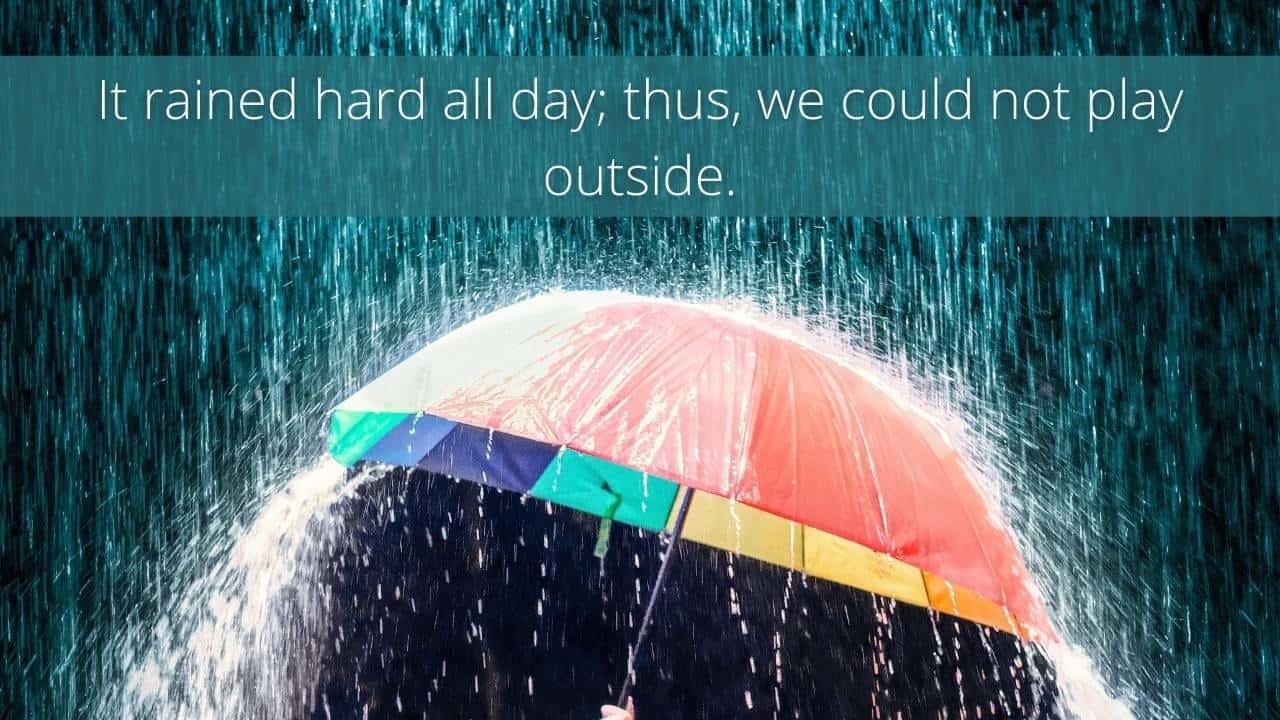 “Thus” is a conjunctive adverb. This means that it can act like a coordinating conjunction in joining two sentences.

Remember, a coordinating conjunction is a word like “and,” “but,” or “or” that joins two independent clauses or complete sentences to make one sentence.

“Thus” means “consequently” in these types of sentences. Here is an example of “thus” being used in this way.

You need a semicolon before “thus,” and usually, a comma should come after it.

It rained hard all day; thus, we could not play outside.

Albert forgot to check the time; thus, he was late for class.

“Thus” at the beginning of a sentence

“Thus” at the beginning of a sentence is usually followed by a comma, but it does not always have to be.

It is identical to the above situation with the semi-colon except that, of course, there is no punctuation before “thus” since it is at the beginning of the sentence.

The cat had been playing all morning. Thus, it slept throughout the afternoon.

Remember that even though there might not be a strict punctuation rule for some comma usage, different teachers, style manuals, organizations and companies may have an additional rule they like to use for these optional cases to keep writing consistent.

Introducing a gerund or another set of words 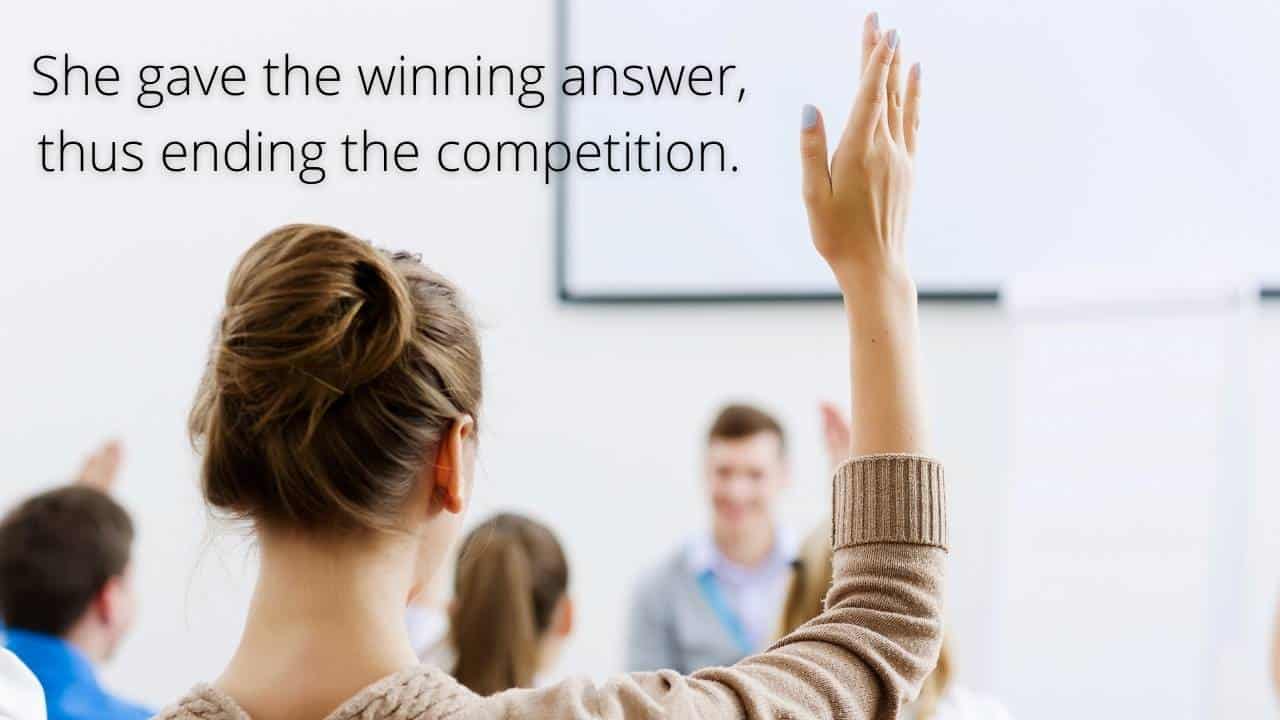 When “thus” is used to mean “consequently” or “as a result of” and introduces a gerund or a gerund phrase, a comma is necessary before it but not after it. The word “thereby” could be used interchangeably in these types of sentences.

Here are some examples:

She gave the winning answer, thus ending the competition.
He burned the roast, thus spoiling their dinner.
They worked hard on the house all summer, thus transforming it into a beautiful showcase.

What are “strong” and “weak” breaks or interruptions? 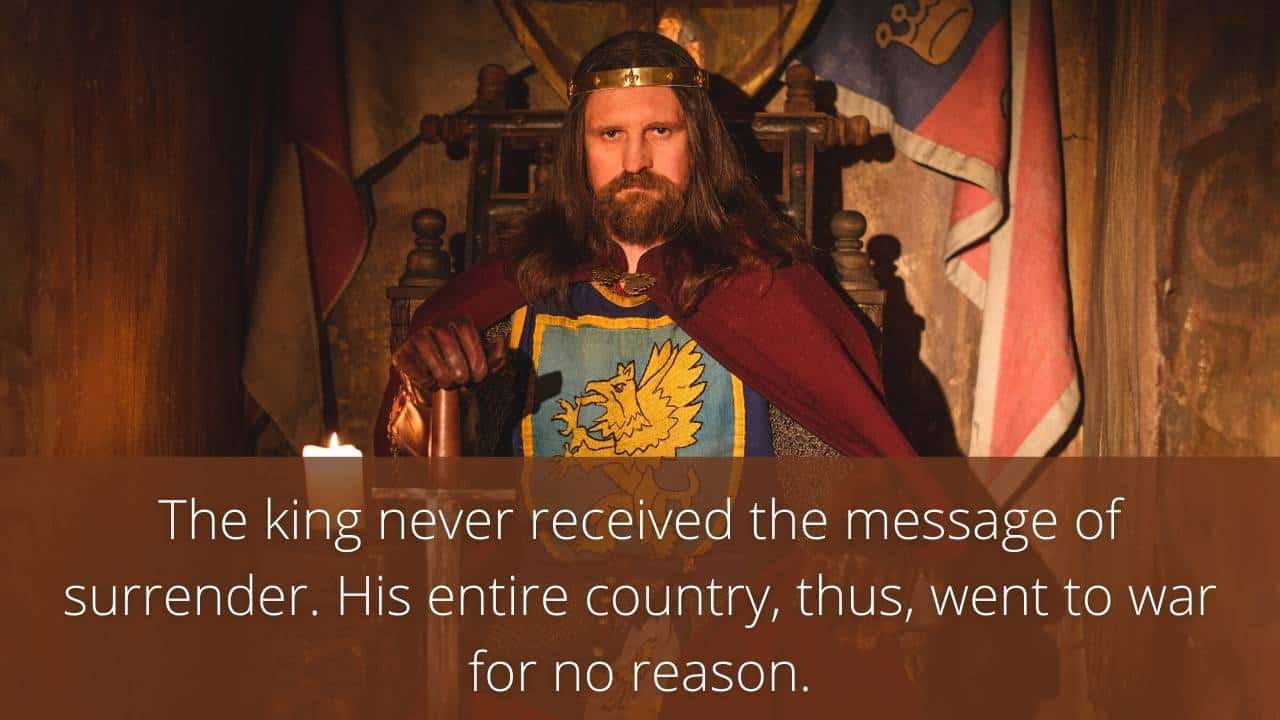 This refers to whether the use of the word “thus” significantly interrupts the flow of a sentence or is used for emphasis. When this is the case, it is a strong break and needs a comma.

If “thus” does not significantly interrupt the sentence, it is a weak break, and it might not need a comma.

Comma usage in these cases is somewhat subjective. You have to be careful though because in the case of a strong break or interruption, if you leave the comma out, it will be noticeable.

In the sentence below, putting commas around “thus” help emphasize the importance and tragedy of the consequence.

The king never received the message of surrender. His entire country, thus, went to war for no reason.

Here’s an example where you probably don’t need a comma around “thus.”

Rahul made apple pies all day. His house thus smelled of cinnamon and cooked apples.

When “thus” comes between verbs

“Thus might come between verbs in certain compound verb uses.

Here is an example of “thus” making a weak break between the two verbs used for past progressive tense:

Bob forgot his lunch and was thus starving by the time he got off work..

Here is an example with a strong break:

The civilization was conquered, and all of its records were destroyed. It was, thus, forgotten until hundreds of years later.

Once again, notice that the subtle difference between using a comma with a strong or weak interruption has to do in part with emphasis and the importance you are giving to the consequence.

It is not really a big deal if Bob is a little bit hungry after work. In comparison, the destruction of an entire civilization is much more consequential.

A comma around “thus” in the sentence about Bob could add humorous emphasis to the fact of Bob’s hunger.

If you think about a comma as indicating a pause in speech, imagine how you might say these two sentences differently:

Using a formal register in an informal situation can be a way of speaking humorously because it helps you exaggerate the consequences of a situation.

As we’ll discuss a little bit more below, “thus” is used in formal speech.

The second sentence suggests that Bob’s hunger is not serious, because being hungry after skipping one meal is usually fairly trivial.

However, it might be something Bob’s friends tease him about taking very seriously.

Let’s look at one more example where “thus” comes between verbs. In the introduction to this post, you read:

Figuring out when to use a comma before or after “thus” can thus be tricky.

This comes just after the paragraph that tells you that using a comma before or after “thus” is often a matter of style.

In the phrase “can thus be tricky,” the word “thus” is referring back to this matter of style that makes the comma optional.

This is a weak break, but it might help you to better understand the difference if you read the sentence out loud with no pauses and then again with pauses around the second “thus” in the sentence.

Figuring out when to use a comma before or after “thus” can, thus, be tricky.

Do you hear the difference in emphasis and how the comma could subtly change how you read the sentence? 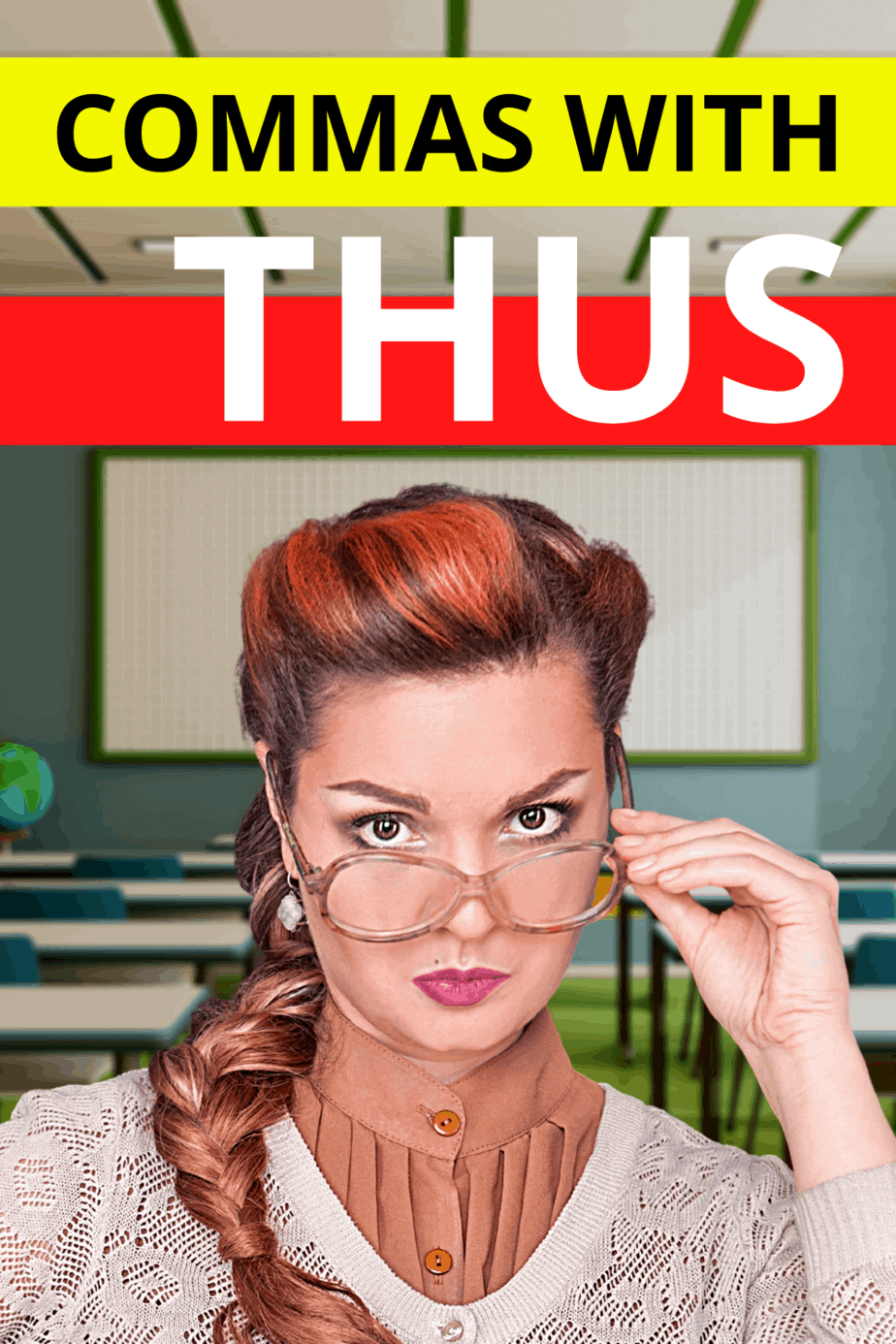 Do you need a comma with “and thus”? 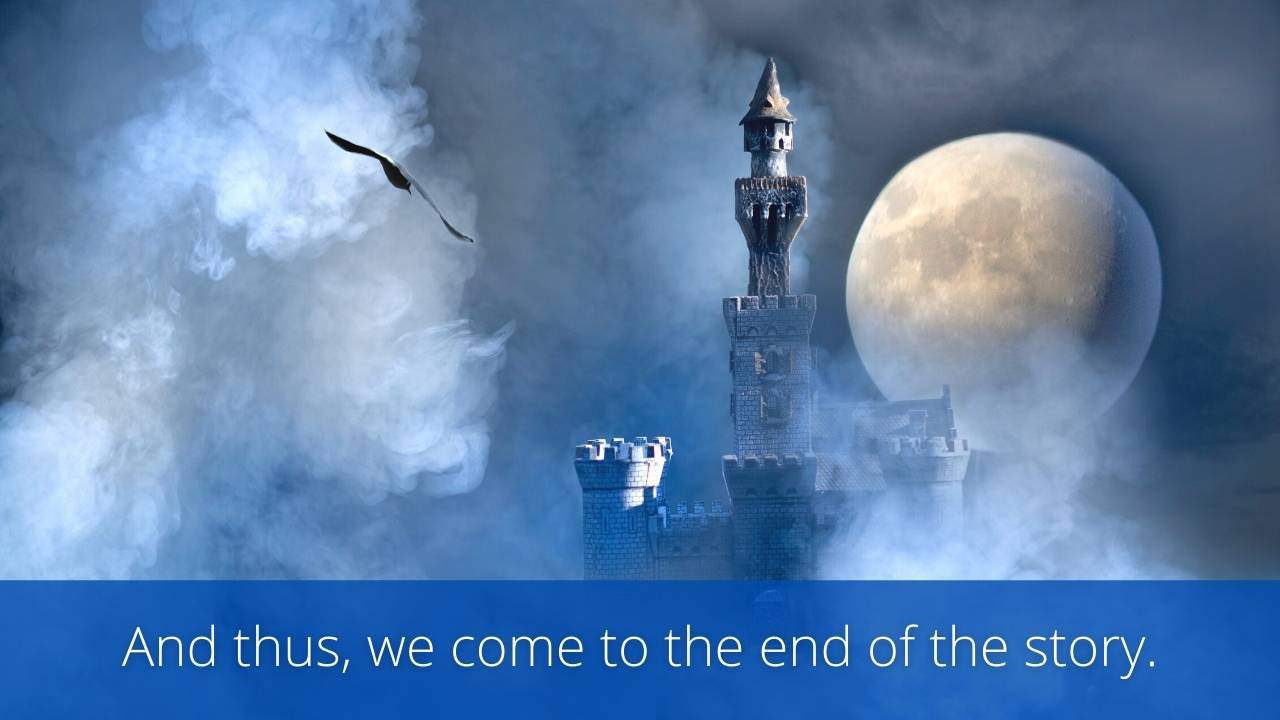 The rules for using a comma with “and thus” are consistent with those reviewed above.

“And thus” at the beginning of a sentence

A comma is optional, adding greater emphasis if it is used.

Take a look at the difference in these two sentences. Once again, try reading them out loud, pausing at the comma:

In the first example, the comma suggests that the end of the story is an important occasion.

The listeners might be somewhat sad or disappointed that the story is over.

In the second example, it is less important that the story is at an end.

In fact, it could even signal that the story is about to be wrapped up very quickly and perhaps anticlimactically:

“And thus we come to the end of the story with Alice waking up from a strange dream.

As discussed above, when “thus” connects two independent clauses, you need a semicolon before “thus.”

However, when “and thus” connects the two independent clauses, it is like any other sentence in which a conjunction connects two sentences. A comma must come before “and”:

The show was over, and thus, we went home.

As is the case with “and thus” at the beginning of a sentence, using a comma after “thus” is optional:

The show was over, and thus we went home.

“And thus” connecting a dependent clause or compound predicate

Keep in mind that when you join two phrases with “and,” this does not necessarily mean they are both independent clauses. Here’s an example:

Stretching before exercise can warm up your muscles and thus prevents injury.

The clause beginning “and thus” does not have a subject, so it is not a complete sentence. It is a compound predicate.

You are not supposed to separate a compound predicate from the rest of the sentence with a comma, so you do not use one here.

When should “thus” be used?

One thing you might notice in some of the example sentences above is that “thus” could be taken out of the sentence without changing the meaning or structure.

As mentioned above, “thus” is a word that is both formal and slightly old-fashioned.

You would be more likely to see it in writing or hear it in a speech someone is making or in another formal spoken context.

In informal speech, it would stand out a bit. The contrast of the word’s formality means that using it in casual speech draws attention to it.

For that reason, you might use it for emphasis or comedic effect.

As discussed above, mixing formal registers into casual conversations and trivial occurrences is one way to bring out the humor of the situation.

If you were speaking informally and you were talking about one thing happening as a result of another, you would be more likely to say “that’s why” instead of “thus.”

Formal:
I overslept; thus, I was late.

Informal:
I overslept; that’s why I was late.

“Thus” rarely comes at the end of a sentence, but there is an idiom that you may occasionally see that uses “thus” at the end, and it never needs a comma before it.

“It was ever thus” or “Twas ever thus” means that a certain thing has always been this way and always will be, or at least it seems to be the case. (“Twas” or “’twas” is sometimes used a poetic contraction of “it was.”)

Here is an example of the idiom followed by an independent clause, in which case a comma is needed after “thus”:

“It was ever thus, and the rich and powerful will always win.”

However, it is more common to simply hear people say just the four words, “It was ever thus,” with nothing following it.