Some people would say that oral speech is more difficult than writing; however, others also think the other way around.

In writing, punctuation rules are one of the most vexatious concerns.

Punctuations, such as commas, provide further meaning to the reader because of their ability to alert the initiation of pauses.

Pauses are then essential in setting the tone of an idea or argument, as well as in preventing oxygen deficiency issues when reading a document aloud.

When is a comma necessary before “except”?

Except may act as preposition, verb, or conjunction in a sentence.

The simple answer to the question is it does need a comma before it when it functions as a conjunction that tethers two independent clauses together.

We also need a comma preceding except when it serves as a parenthetical element.

However, a comma is unnecessary when it is used either as a verb or preposition.

Except as a conjunction

It functions as a conjunction that is similar to “but” when it is followed by an idea of exclusion constructed either as an adverbial phrase or clause.

A comma is necessary for this type of sentence construction since “but” is one of the coordinating conjunctions a.k.a FANBOYS.

Coordinating conjunctions join two independent clauses together and a comma is needed to highlight the fact that these contrasting ideas are able to stand alone.

He badly wants to sing in public, except he isn’t gifted with a beautiful voice.
He has performed in most of the states in the USA, except in the northeastern ones.

More frequently than the above-mentioned cases, except is followed by either that or when to connect clauses together.

A comma is also necessary to set off an idea that a writer blatantly wants to emphasize.

Doing this prompts the reader to assume that the next idea would then denote a stronger implicature as opposed to the simplistic nature of the first clause.

Her husband had told her everything, except that he already had an illegitimate child before their marriage.
Tanya hardly ever does the chores, except when her boyfriend is in the house.

Except as a parenthetical statement

Another way to express the idea of exclusion is by using “except” as an introductory parenthetical element.

Parentheticals are words, phrases, or clauses inserted in the sentence for rhetoric or interjectory purposes.

Inserting these elements is generally treated as inessential, thereby making its removal plausible without lacerating the grammaticality of the sentence.

All nonessential entities mainly act as supplementary devices in a sentence, and thus needed to be partitioned clearly by commas.

The shop’s marquee says it’s open 24/7, except Sundays, which doesn’t make any sense.
All of my college friends, except Dani who’s good at being grumpy, are either engaged or already married.
Every member of the Rangers, except one, is handsome.

While the syntactical structure remains intact, the implicit meaning could change either slightly or dramatically after directly removing parentheticals; therefore, caution is advised when utilizing this writing technique. 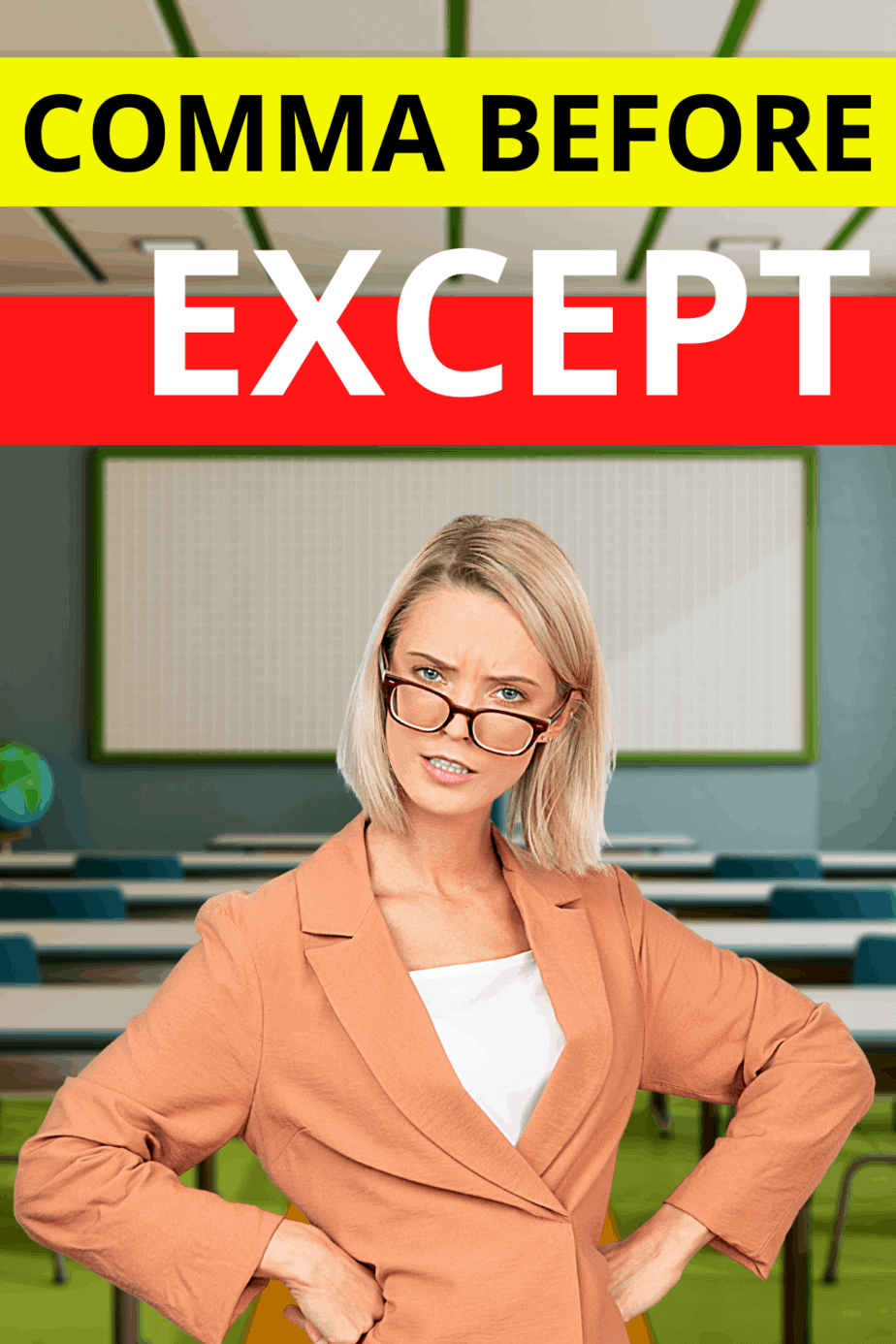 When is a comma not necessary before except?

“Except” does not require any adjacent commas when it functions as a preposition since prepositional phrases are fundamentally formed by the “preposition + object” pattern wherein the object could either be a noun or a pronoun.

Except as a preposition

So, how do we know if it is used as a preposition rather than conjunction?

Prepositions mainly link the relationship of nouns or pronouns to the rest of the sentence while conjunctions are used to connect ideas logically.

Thus, the job scope of conjunctions is way larger than prepositions.

Spotting the prepositional usage of except is relatively easier.

All we need to do is check the word or words after it.

In creating prepositional phrases, an object is normally placed after the preposition.

The object, of course, is a noun that is either used alone or in series.

The whole family attended the burial ceremony except Julia.
She has already informed everyone in the club except Martin, Sandy, and Tyrone.

Furthermore, “except” may also be followed by another preposition, “for”, forming the slightly more complex preposition “except for” which may appear at the beginning, middle, or end of the sentence.

Except for shares a similar denotation of exclusion with except, only that it is more specifically used to mean “if it were not for” altogether with some implicit meaning that indicates reservation.

A comma is also not used right before this.

I may accept all of your reasons except for the last one.

Except as a verb

The last mask possibly worn by except is the one that serves a verbal function in a sentence.

Compared to the previous parts of speech, except functioning as a verb occurs less frequently.

The lexical meaning of except does not change, but its grammatical function does.

When except is acting as a verb, a comma is not needed at all just like how verbs normally behave.

We also have to take note that this specific usage is rather formal and almost archaic which explains its seldom usage.

My grandfather excepted one of his sons from his last will.
The company excepts him from the sanctions.

Considering all the instances mentioned above, comma usage before except is usually necessary when connecting independent clauses or inserting parentheticals, but inessential when used in constructing prepositional phrases.

This post constitutes a general yardstick that governs comma usage altogether with “except”.

However, some tweaks can be freely done for creative writing reasons wherein comma usage is spontaneously arbitrary.

This arbitrariness supports the notion that language is continuously evolving, and will definitely have minor or major changes either in the near or far future.