A well-known fact is that language is arbitrary, and there lie the conflicting purposes of information expression.

Information can either be affirmative or negative in sense, thereby necessitating words that could express idea affirmation or negation.

Similarly, the salience of punctuation marks in the meticulous disambiguation of meaning in written language is indisputable.

To proactively serve as a solution to such linguistic nuances, this post aims to provide easy-to-use guidelines on the comma usage before “nor”.

Is a comma necessary before nor?

Yes, particularly when linking two independent clauses in a compound sentence and when using it as part of a parenthetical expression.

Parenthetical expressions are the insertion of ideas to add clarity and focus to a particular part of a text.

On the flip side, a comma is unnecessary before nor when.

The conjunction nor means “also not,” or it can be simply interpreted as equivalent to saying “not or.”

Sentences using nor requires a specialized grammatical structure that may not be simply comprehended by non-native English users.

There are two ways in which nor requires a post-comma placement.

A comma must be inserted before nor when connecting two independent clauses.

Parenthetical expressions are grammatically-dispensable thought insertions whose purpose is to add emphatic effect to the text.

Let’s look at each case in detail.

Nor is a type of coordinating conjunction that connects two negative ideas and denies two non-contrasting arguments.

Coordinating conjunctions mark the connections of words, phrases, or clauses with equal grammatical weight or rank.

This type of conjunctions are mnemonically abbreviated as FANBOYS which stands for the following words: for, and, nor, but, or, yet, so.

Thus, the same rule applies to nor when used in a sentence.

A sentence containing two independent clauses coordinated by the FANBOYS is known as a compound sentence, according to the structural form of sentences.

The first clause should contain a negative verb marked by the usage of the adverb not.

The second clause, which comes after nor, may look like an interrogative sentence with an affirmative verb.

As for the second clause, an affirmative auxiliary verb is followed by the subject and complements.

The dog isn’t an Alaskan Kee Klai, nor is it an Alaskan Malamute.
I cannot play the drums, nor can I play the saxophone.

Again, the purpose of using nor is to deny two separate arguments through creating relatively shorter sentences.

Therefore, none of the secondary clauses above convey affirmation despite the usage of affirmative verbs.

The first sentence implies that the dog does not fall on any of the two breeds mentioned in the sentence.

Similarly, the second sentence means that the subject does not have any of the abilities stated.

A parenthesis is a stylistic device used for rhetoric or persuasion reasons.

Parenthetical expressions are either intentional or accidental thoughts that the writer intends to convey.

These expressions are grammatically removable, thereby not hurting the sentence’s well-formedness when omitted.

All parenthetical statements occurring within a sentence need to be segregated by commas to mark the emphasis and dispensability.

Hence, a parenthetical expression introduced by nor necessitates a pre-comma placement.

They should not shout at the kid, nor impose any other form of punishment, for an accidental mistake.

The negation process in the sentence above implies that the two kinds of punishments are not supposed to be done.

Additionally, the sentence can also be restructured in such a way that the parenthetical clause comes at the end.

They should not shout at the kid for an accidental mistake, nor impose any other form of punishment.

Since the nor-clause is a parenthetical insertion, it means that the sentence would still make sense even after removing it.

They should not shout at the kid for an accidental mistake.

Nor after a parenthesis

Now that the parenthetical rule has been elaborated, it is much easier to understand this next guideline.

Taking the parenthetical comma rule into account, we can deduce that a comma should also come before nor when it succeeds a parenthesis.

Again, a comma is always necessary to encapsulate parenthetical elements and thereby automatically requiring a comma before nor when used in the structure above.

When is a comma unnecessary before nor?

Since the job of conjunctions is not restricted to connecting clauses alone, they may also conjoin words and phrases in a sentence.

Nor may also be used together with the adverb neither to form another type of conjunction.

This new type of conjunction is known as correlative conjunctions whose major tasks are to logically compare, distinguish, and connect ideas.

Neither and nor work as a pair to deny or reject the existence of ideas and entities.

Just like nor, the adverb neither is also used as a negatory word to convey the meaning of “not either.”

Using both words in a sentence significantly decreases the number of words needed to express negation.

Sarah neither likes olives nor pineapples on pizza.

Commas are not used before nor since the two negative arguments are already combined into one coherent sentence.

If the sentence will be rewritten, it would like the following example.

Sarah does not like pineapples nor oranges on pizza.

Notice that nor is not followed by a comma as it only connects a phrase rather than a clause.

The sentence implies the same meaning as the first example with the only difference in the verb expression.

Since neither has already been dropped, it is essential to negate the verb used in the sentence to maintain the same meaning. 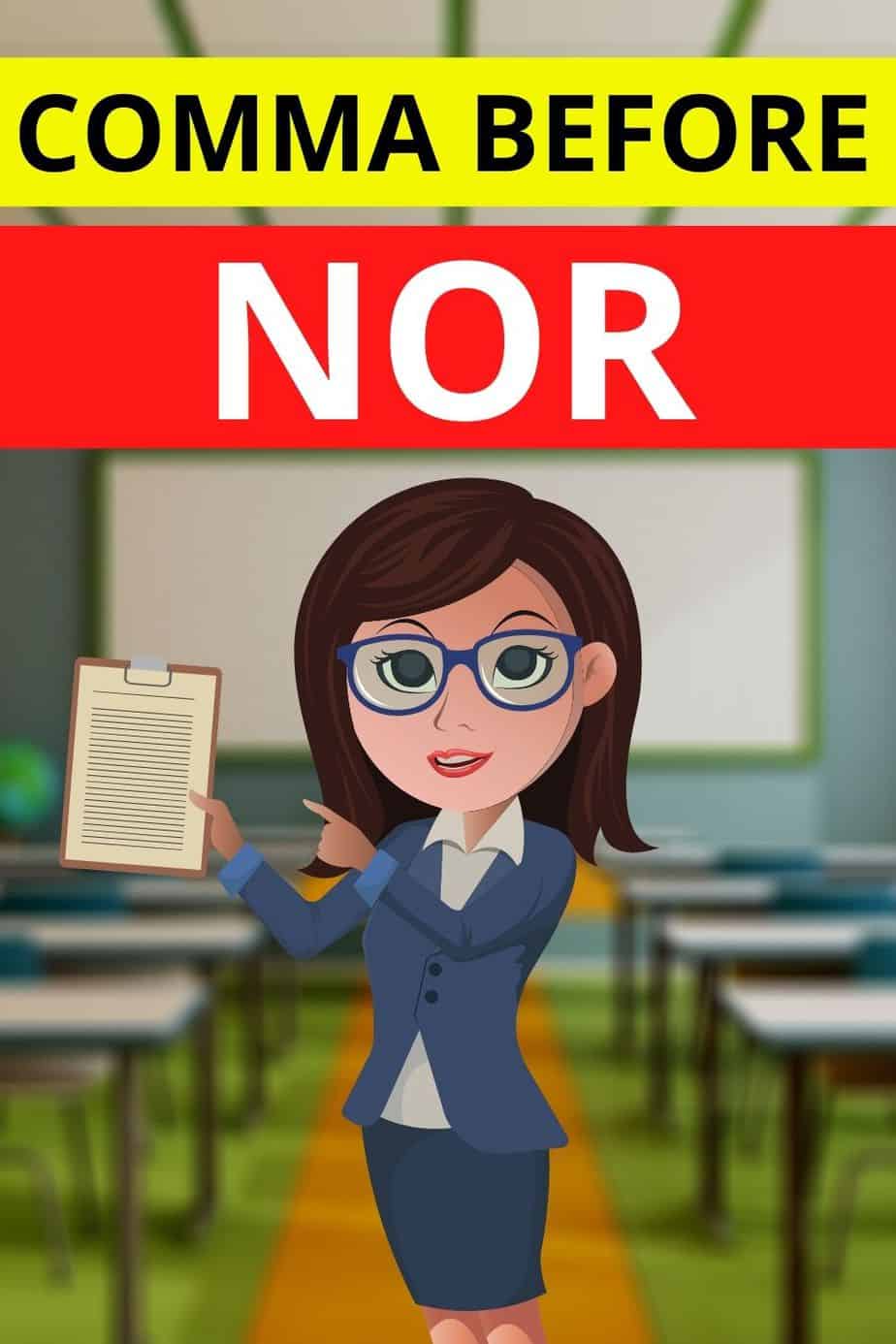 Negation is a process that requires negative lexical terms for a successful argumentative expression.

To attain a nonetheless coherent expression of non-occurrence of events, negatory words altogether with commas are essentially used in the process.

Negatory words and commas are functionally salient in coherently denying the truth value of an idea’s existence.

Thus, understanding the guidelines that dictate their usage facilitates better communication and diminishes the chances of misinformation.