A gerund is a verb with “ing” added to the end of it.

That sounds pretty straightforward, but identifying a gerund is not quite as simple as that because adding “ing” to a noun does not automatically make it a verb.

Only some verbs ending in “ing” are gerunds.

We’ll discuss more at length how to identify gerund and gerund phrases to help you determine if you need a comma before them.

Do you need a comma before a gerund?

In most cases, a comma before a gerund is not required. However, because gerunds and gerund phrases act as nouns in sentences, if a comma would come before a noun used in the same way, then a comma should precede the gerund or gerund phrase.

A verb that has “ing” added to the end of it is either a present participle or a gerund.

Present participles can act as verbs or as as adjectives. A gerund always acts as a noun.

One thing that can be frustrating about English is that there are certain points that even experts cannot agree on! Some sources consider a gerund a kind of present participle.

Don’t worry too much about this label. It isn’t important for understanding how to identify a gerund or whether it needs a comma.

Just smile and tell yourself that this makes studying the English language more exciting!

In this article, we’ll talk about present participles and gerunds as though they are two separate things.

What is important is identifying whether the “ing” word is acting as a verb, an adjective, or a noun.

Let’s quickly review the different kinds of present participles so that you can make sure that you don’t confuse them with gerunds when determining whether or not a comma is necessary.

When used with one or more “helping” or “auxiliary” verbs, a present participle is part of the progressive or continuous tenses in English. There are present, past, and future progressive tenses:

She is swimming.
They were laughing.
He will be studying.

There are also present perfect, past perfect, and future progressive tenses:

She has been reading.
I had been working.
We will have been walking.

Finally, there is the perfect progressive condition tense:

If it had been warm, I would have been swimming.

A present participle can also be used as an adjective, a word that describes a noun. Sometimes, these are called “participle adjectives.” Here are some examples:

He read an interesting book.

The verb “to interest” has “ing” added to make it an adjective describing the book.

The sleeping child was not disturbed.

The verb “to sleep” has “ing” added to make it an adjective describing the child.

We threw water on the burning coals.

The verb “to burn” has “ing” added to make it an adjective describing the coals. 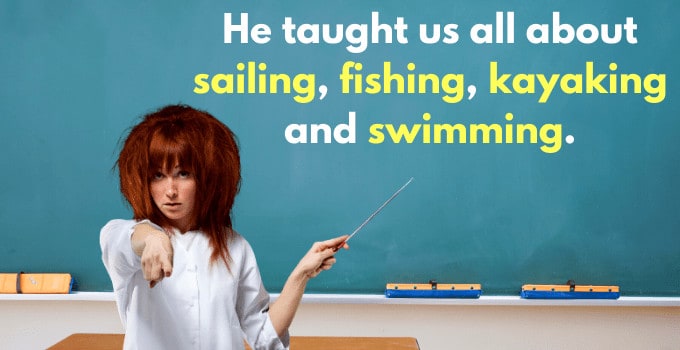 The examples above show you that just having an “ing” ending is not enough to identify a word as a gerund.

Now, let’s talk about “ing” words that are used as nouns, or gerunds. In each of the examples below, the gerund in the sentence is the word that ends with “ing.”

However, notice that the gerund has a different purpose in each sentence.

A gerund is always a noun, but it can function in five different ways in a sentence.

The gerund as subject of the sentence:

Cooking is one of my favorite things to do.

Waiting is one of my least favorite things to do.

The gerund as direct object of the verb (“love” and “considered”):

I love dancing with my friends.

The gerund as object of the preposition (“about” and “for”):

He taught us about sailing.

She bought the poles for hiking.

The gerund as predicate noun:

An activity you may enjoy is skiing.

Less commonly, the gerund is occasionally used as the indirect object of the verb.

In the sentence below, the main verb is “gave” and the gerund “running” is the indirect object. “Her best effort” is the direct object.

She gave running her best effort. 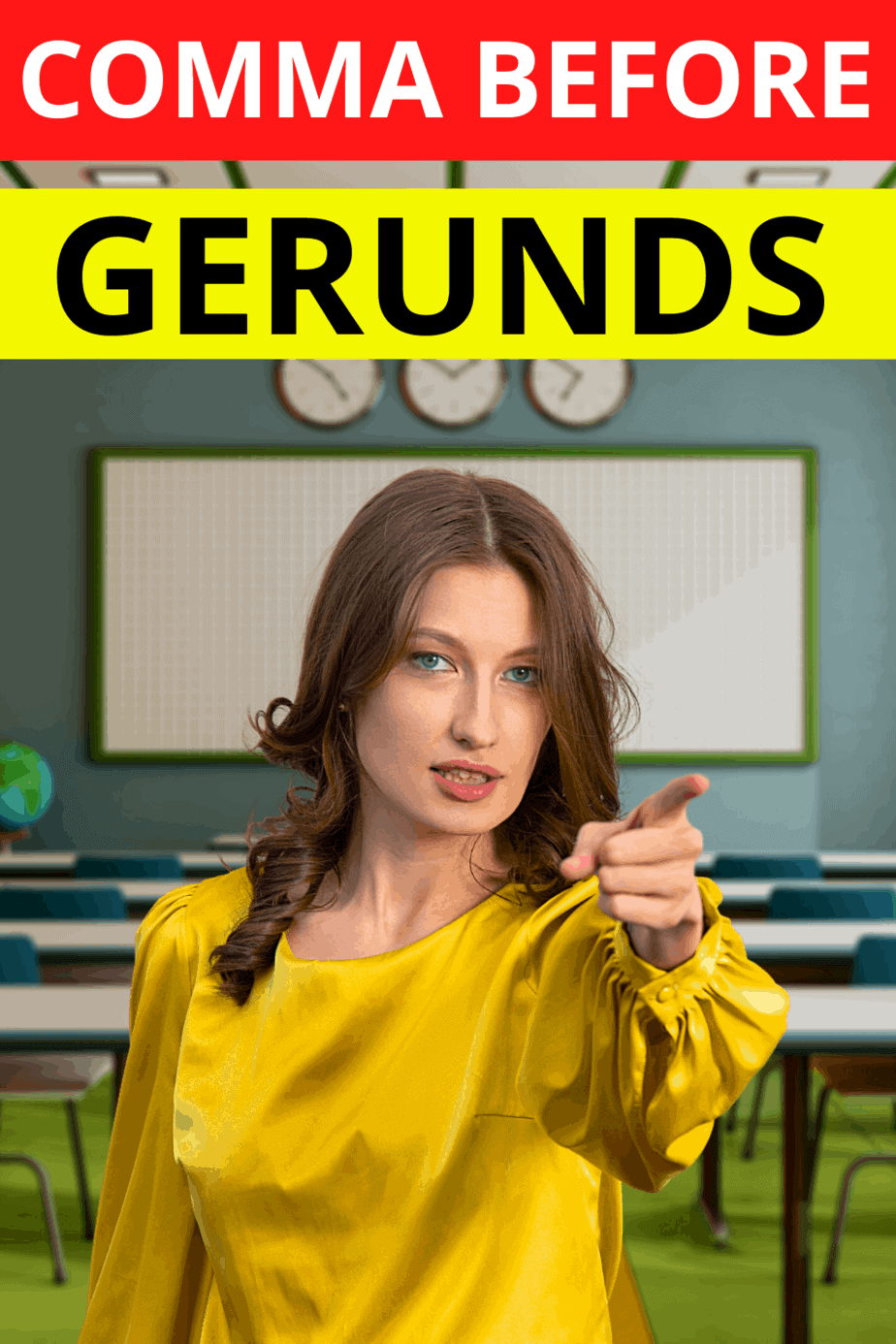 In a gerund phrase, a gerund along with several other words act as a noun.

A gerund phrase may serve one of several different different functions in the sentence just as a gerund does.

Below are five sentences in which “eating late at night” is the gerund phrase.

In this first example, the gerund phrase is the subject of the sentence.

Eating late at night gives me a stomach ache.

Here, the gerund phrase is the direct object of the verb hate.

I hate eating late at night.

Here’s the gerund phrase as the object of the preposition “about.”

I talked to my family about eating late at night.

The gerund phrase is a predicate noun here:

One thing I dislike a lot is eating late at night.

And finally, this is the gerund phrase as indirect object. (“Another try” is the direct object).

We will give eating late at night another try.

The gerund phrase versus the present participle phrase

In the sentence below, the participle phrase, “sobbing loudly,” is an adjective that describes how she performed the verb, “opened.”

Sobbing loudly, she opened the letter.

She opened the letter, sobbing loudly.

Of course, “sobbing loudly” can be a gerund phrase instead of a participle phrase, but it needs to change what it does in the sentence from acting as an adjective to acting as a noun.

In the example below, the gerund phrase “sobbing loudly in public” is the subject of the sentence.

Sobbing loudly in public was embarrassing.

A short rule to help you identify gerunds

The most important thing to remember when identifying a gerund is that it is a noun.

In some sentences, you might be able to check by replacing the gerund with a noun.

Commas before gerunds in more detail

We’ve spent all this time talking about how to identify a gerund or a gerund phrase because that’s the first step in determining whether or not you need a comma before a gerund.

You might have looked over all of the examples above and thought that there were no commas in any of the gerund examples, so it is not necessary to use a comma before a gerund.

However, this is not the case. Those examples are simple sentences to make it easier to identify the gerund.

In more complicated sentences, you may need a comma before a gerund.

If you have three or more items in a list, each one must be followed by a comma. (The exception is the next-to-the-last word in the sentence, before “and.”

The comma here is optional although you may have a teacher or an employer who has a preference about whether you use it.)

Here’s an example. All the “ing” words in the sentence below are gerunds. They are the object of the preposition “about.”

He taught us all about sailing, fishing, kayaking and swimming.

Here’s another with the gerunds at the beginning of the sentence:

Traveling, shopping and golfing are his favorite activities.

The same is true if the list is one of gerund phrases:

Writing a letter, making a phone call or cooking a meal are all ways to show someone that you care about them.

As you see, gerunds or gerund phrases in the middle of a list will have commas before them.

With an introductory phrase 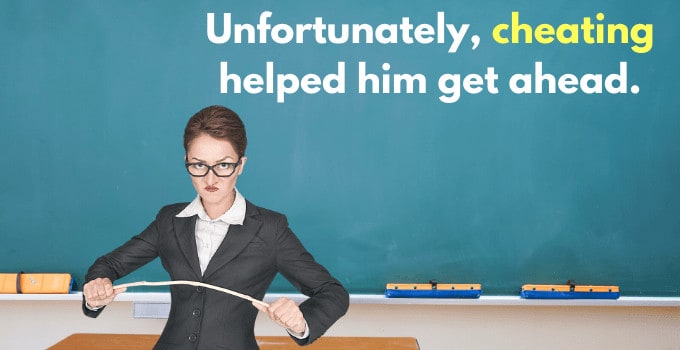 When a sentence begins with an introductory phrase, that phrase needs to be followed by a comma.

This remains true if the word that follows is a gerund.

Therefore, this is another example of when you need a comma before a gerund.

Here are some examples:

Unfortunately, cheating helped him get ahead.

In the morning, cleaning was the first task of the day.

Last but not least, reading improves your vocabulary.

And of course, this is true of gerund phrases as well:

Sadly, quitting her job was the only option.

Unfortunately, bathing the cat was not a fun activity.

When phrases are inserted before a direct object

There are sentences in which a gerund is the direct object of the verb and additional words may be inserted before the gerund, often for emphasis.

Those additional words must be set apart from the rest of the sentence by commas.

Therefore, in those sentences, there will be a comma before the gerund.

Here are some examples. The first has a gerund and the next two have gerund phrases.

I hate, more than anything, cleaning.

She understands, to be clear, worrying about money.

I love, most of all, gazing at the stars at night.

This is a somewhat informal way of writing, but there are a few reasons you might choose to put the phrase before the gerund in this way.

In addition to adding emphasis, if you have a poetic mind and care about the rhythm of sentences, there may be times when putting the phrase in the middle of the sentence like this sounds better.

However, it would be more common to write these sentences in ways that would not require a comma before the gerund:

I hate cleaning more than anything.

To be clear, she understands worrying about money.

Most of all, I love gazing at the stars at night.

As sentences become more complicated than the examples above, you might start to feel confused about how to identify the gerund and whether it needs a comma.

Most of the time, swimming is a safe activity, but under the circumstances, staying on the beach is probably a better idea.

This is a compound sentence, meaning it is two independent clauses, or complete sentences, joined by a conjunction. In this case, the conjunction is “but.”

Let’s look at one more sentence:

Because she was stressed, reading did not take her mind off her worries, and unfortunately, sobbing hysterically did not help either.

This may look complicated, but it really isn’t so difficult when you break it down.

There are two independent clauses, or complete sentences joined with “and.”

Commas are necessary before the gerunds because there are introductory phrases at the start of each independent clause.

Remember, one way to check for sure if a word or phrase ending in “ing” is a gerund is to see if it could be replaced by a regular noun. As you see, it is possible in this sentence:

Because she was stressed, the dog did not take her mind off her worries, and unfortunately, the cat did not help either. 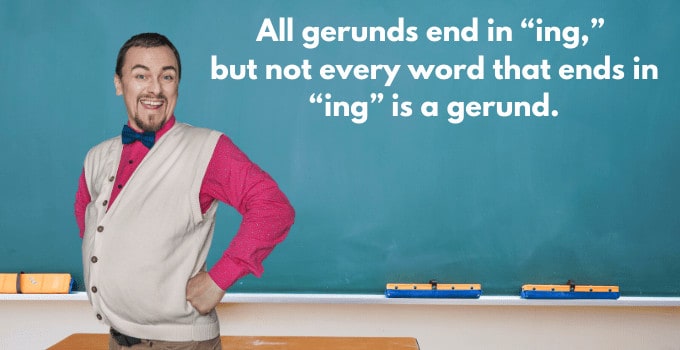 This might seem like a lot of information for making sure you use commas correctly with gerunds, but there are really just a few simple rules to remember.

All gerunds end in “ing,” but not every word that ends in “ing” is a gerund.

It is important to understand the difference in a present participle and a gerund.

However, identifying whether or not you need a comma before a gerund is also about what the gerund and other words and phrases are doing in the sentence.

When a comma comes before a gerund, it is because a regular noun in the same position would also need a comma before it.