Researchers have shown that being polite has a ‘positive social value’ in many cases.

In other words, it pays to be polite.

One of the easiest ways to do that, as any parent knows, is to say “please” and “thank you.”

But where do the commas go if you’re thanking someone?

Read on, please, to find out. (And there’s no need to thank me.)

Do you need a comma after “thank you”?

If you are telling someone “thank you” directly, you always need a comma after “thank you.” This is the most common way of using the phrase, so in most cases you will want that comma. You should also put a comma or a period after “thank you” if it’s the last part of a letter or email before your name or signature. However, if you are using “thank you” as a noun, or if these two words just happen to follow one another as the verb and direct object of a clause, you should not use a comma after it.

Commas and “thank you” as a direct address

The most common way “thank you” is used is as a form of direct address.

Any time you’re thanking someone, whether it’s face to face or in writing, by explicitly telling them “thank you,” that is an example of direct address.

The comma rules for direct address require you to follow the word or phrase that makes up the address with a comma.

That means that, if you’re telling someone thank you, you always need a comma after the word “you.”

Here, the phrase “thank you” is followed by the name of the person being thanked. A comma needs to be used after “thank you,” as it is a form of direct address.

Although this might not seem like an example of direct address, the “thank you” is still being inserted into the sentence to explicitly and directly thank someone. That means we still need a comma. 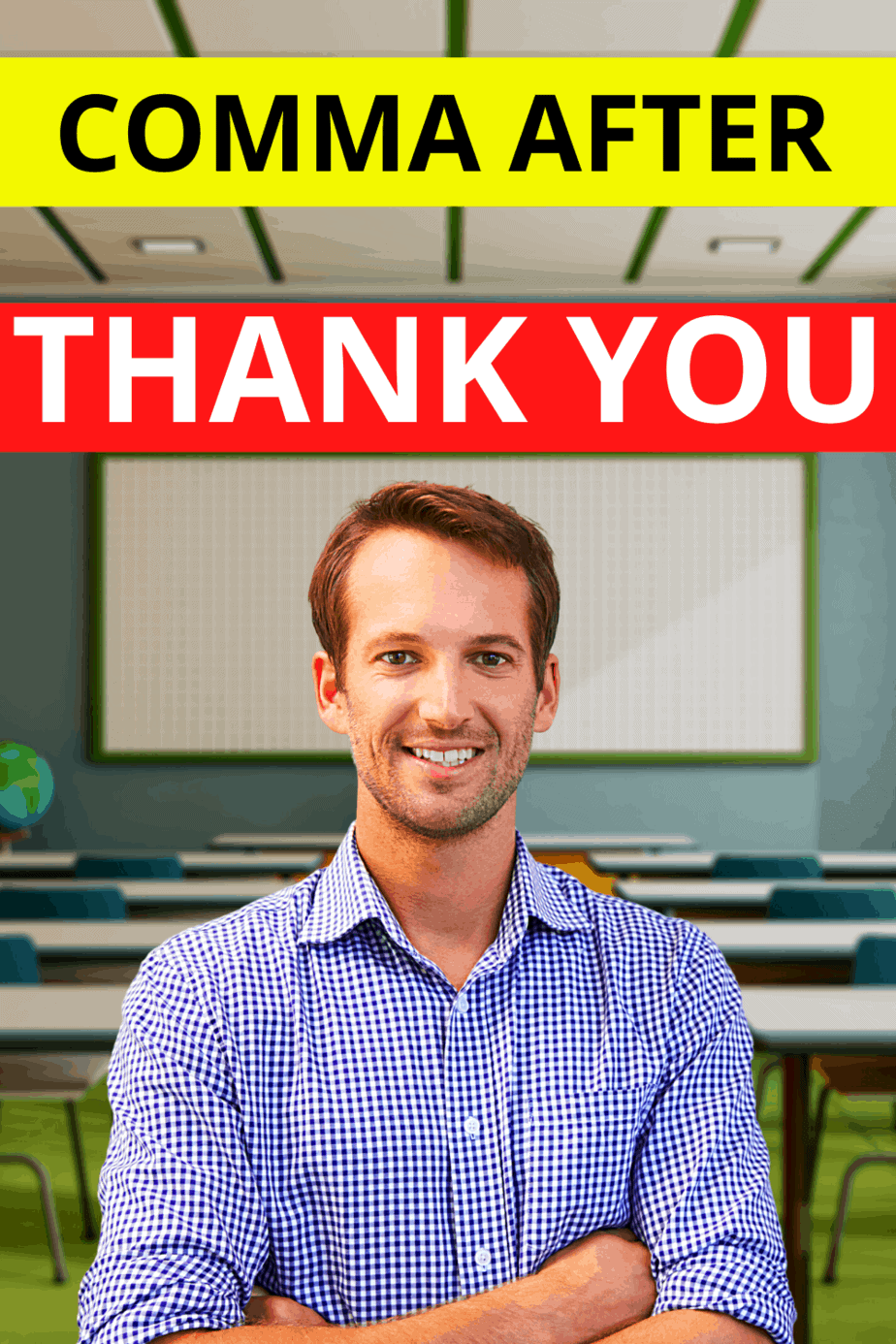 “Thank you” in email: do you need a comma?

Saying “thank you” as the last thing in an email or letter before you sign your name is a form of direct address.

That said, this is actually a place where a stronger form of punctuation, such as a period, would be more appropriate. The reason for that is simply that a period adds more clarity than a comma here.

If you sign your emails with “regards” or some other kind of similar word, the same rules apply. You should follow your closing salutation with a comma or a period.

This email is suspicious, and probably a phishing attempt, but at least it’s properly punctuated.

The period after “thank you” could also be a comma here. Either is fine.

Commas and “thank you” as a noun

Although it’s not very common, you can technically use the word “thank you” as a noun.

This might happen in a sentence where you need to mention that you told someone thank you, for instance.

If you’re doing this, you shouldn’t use a comma after “thank you” by default. Of course, if there is some other grammar rule that requires a comma, you should still use one. It’s just that “thank you” as a noun doesn’t itself require one.

“I offered him a thank you, and went on my way.”

Here, a comma comes after “thank you” because it is in front of an independent clause beginning with “and.”

In other words, it’s because you need a comma before “and” at the start of an independent clause that the sentence has a comma in it. The phrase “thank you” doesn’t require a comma after it in this case.

This might be something a parent tells their child to remind them to be polite. Because there’s no other reason to use a comma here, you shouldn’t put a comma after “thank you.”

Commas if “thank you” is part of a clause

Sometimes the words “thank you” will appear in a clause but won’t actually be a usage of the phrase “thank you.”

For instance, the word “thank” could actually be the main verb in the clause “I have to thank you for your help,” while the word “you” is the direct object.

It’s important to make sure which is happening in any given sentence before you try to apply comma rules.

Generally speaking, though, using “thank you” as anything other than a form of direct address doesn’t require you to follow the phrase with a comma unless there are some other grammatical rules which require it.

“I have to thank you for your help.”

This is the same example from above. Because it’s not a direct address thanking someone with the phrase “thank you,” no comma is required.

“My wife wanted me to make sure I thank you before you leave.”

Again, the word “Thank” is the verb in the clause “I thank you before you leave,” and the word “you” is the direct object.

Because there is no other part of the sentence that would require a comma in between the words “you” and “before,” no comma comes after “thank you” here.

The purposes of “thank you”

The phrase “thank you” serves to, well, thank someone for something.

Socially, “thank you” shows that the speaker is grateful for something someone else has done. It also serves to

There are many good reasons, in other words, to say “thanks” when someone does you a favor.

In grammatical terms, the phrase is a type of direct address, basically anything that you say directly to somebody.

Using the phrase “thank you” to sign off from an email or close out a letter before your signature is similar, in that you should follow it with a comma or a period.

Of course, you can also use the word “thank you” as a noun, to talk about thanks to people.

You also need to make sure that any use of “thank you” is actually a direct address, and not just a verb (thank) and direct object (you).