One reason comma rules can be confusing is that sometimes commas are optional, or the rules vary based on the writing style a person is using.

There are other comma rules that are very strict.

If you do not follow them, your sentence will not make sense, or it will say something that you do not intend for it to say.

The rule for when to use a comma before “whose” is the second type of rule.

It is important to know how to use this comma correctly, or you can end up writing something that you don’t mean!

Do you need a comma before “whose”?

Comma usage with “whose” at the beginning of a restrictive clause

When a phrase is necessary for a sentence to make sense, it is known as a restrictive or essential clause.

When “whose” is part of a restrictive or essential clause, it does not need to be preceded by a comma.

Here’s an example of “whose” in a sentence that does not need a comma.

This sentence is saying that the coach needs to hear only from the parents with children who want to be on the football team, not all parents:

The coach needs to hear from all the parents whose children want to be on the football team.

In the example below, the clause beginning with “whose” is also essential or restrictive.

Without “whose” and the words that follow it, you would not know who to give the scissors to if there were more than one man.

Give these scissors to the man whose mustache needs a trim.

The essential or restrictive clause does not always come at the end of the sentence:

The girl whose mother is a teacher raised her hand.

In the above sentence, “whose” identifies a particular girl. It implies that there is more than one girl, but you know that the speaker means the girl who is the daughter of a teacher.

In this last example, the restrictive clause modifies “the one,” telling you why Marie is “the one.”

Marie is the one whose dog can do tricks.


Comma usage with “whose” at the beginning of a nonrestrictive clause

Then there are clauses that give us extra information but which are not critical to the meaning of the sentence. These are called nonrestrictive or nonessential clauses.

When you have this type of clause, it needs to be set apart from the rest of the sentence with a comma, which means that it needs a comma before “whose.”

It can be helpful to put commas into some of the sentences we looked at above to see the difference.

Do you see how the comma changes the meaning in the sentence below?


The coach needs to hear from all the parents, whose children want to be on the football team.

In the first example, without the comma, there was a larger set of parents.

A smaller subset of parents wanted their children to be on the football team, and those were the parents the coach wanted to hear from. 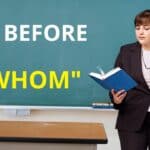 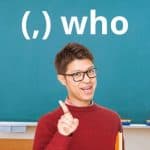 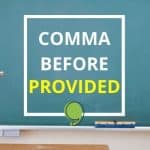 Comma before “provided”: The Definitive Guide

In the example above, all of the parents want their children to be on the football team. They are not part of a larger group of parents.

You do not need the extra information about their children wanting to be on the football team to know who the coach wants to hear from.

It’s just additional information, so it is considered to be part of a nonessential or nonrestrictive clause.

Let’s look at the next sentence.

Give these scissors to the man, whose mustache needs a trim.

In the previous version of this sentence, with no comma, there was more than one man. You only knew which one to give the scissors to because he was the one who needed a mustache trim.

In this version of the sentence, there is just one man.

You do not need the extra information about the man’s mustache, so “whose” and everything that follows it is a nonrestrictive or nonessential clause and needs to be preceded by a comma.

In the same way, in the sentence below, the assumption is that you know what girl is being discussed or there is only one girl. The fact that her mother is a teacher is extra information, so it is set apart with commas.

The girl, whose mother is a teacher, raised her hand.

Note that the last example from the previous section is a little different.

It would never take a comma structured in the way it is because the clause needs to be next to the word or words it is modifying.

In its original form, “whose dog can do tricks” is modifying “the one.”

The fact that Marie’s dog can do tricks is what makes her the one, so the clause is essential and cannot be removed from the sentence without changing its meaning.

Marie is the one whose dog can do tricks.

To make it a nonessential clause, you would need to move it so that it modifies “Marie.”

Marie, whose dog can do tricks, is the one.

In this version, Marie is the one. We don’t know why—we would need to see a fuller piece of the conversation to know why—but the fact that her dog can do tricks is incidental to the reason that she is the one.