A teacher once asked, “What else could be more perplexing than the punctuation system?”

One student answers, “Punctuation decision before words, which belong to multiple parts of speech.”

The straight-A student cringed and thought, “You should’ve used that. Not which.”

No matter which kind of student you used to be, or you still are, this post on the comma usage before “that” should be able to help you out.

When should we put a comma before “that”?

A comma before “that” is only necessary when it introduces parenthetical information in the middle or at the end of a sentence. Inserting a parenthetical that-remark is possible regardless of the part of speech it belongs to. However, a pre-comma otherwise makes the sentence ungrammatical when “that” non-parenthetically functions as a pronoun, determiner, adverb, and most especially, as a conjunction that links a subordinate clause in a complex sentence structure that begins with the main clause.

The essential comma before “that”

While comma usage is already quite an intimidating topic, pairing comma-related guidelines with grammatical homonyms only seems to make matters worse.

“That” is a word that belongs to multiple parts of speech, namely, adjective, pronoun, adverb, and conjunction.

And thus, attaining a full grasp of when to punctuate it with a pre-comma remains an itchy scalp to scratch for many.

Although “that” belongs in several parts of speech, technically called a grammatical homonym in linguistics, the default process on its pre-comma placement isn’t that complicated.

One only needs to identify the essentiality of the information that “that” introduces in order to do so.

Non-essential or non-restrictive information is called a parenthetical element in stylistics, which requires comma-encapsulation.

Whereas, essential or restrictive information need not be separated with a pre-or-post comma nor two adjacent commas.

Therefore, regardless of the part of speech used, the statutory comma before “that” is necessary when it introduces parenthetical information in texts. 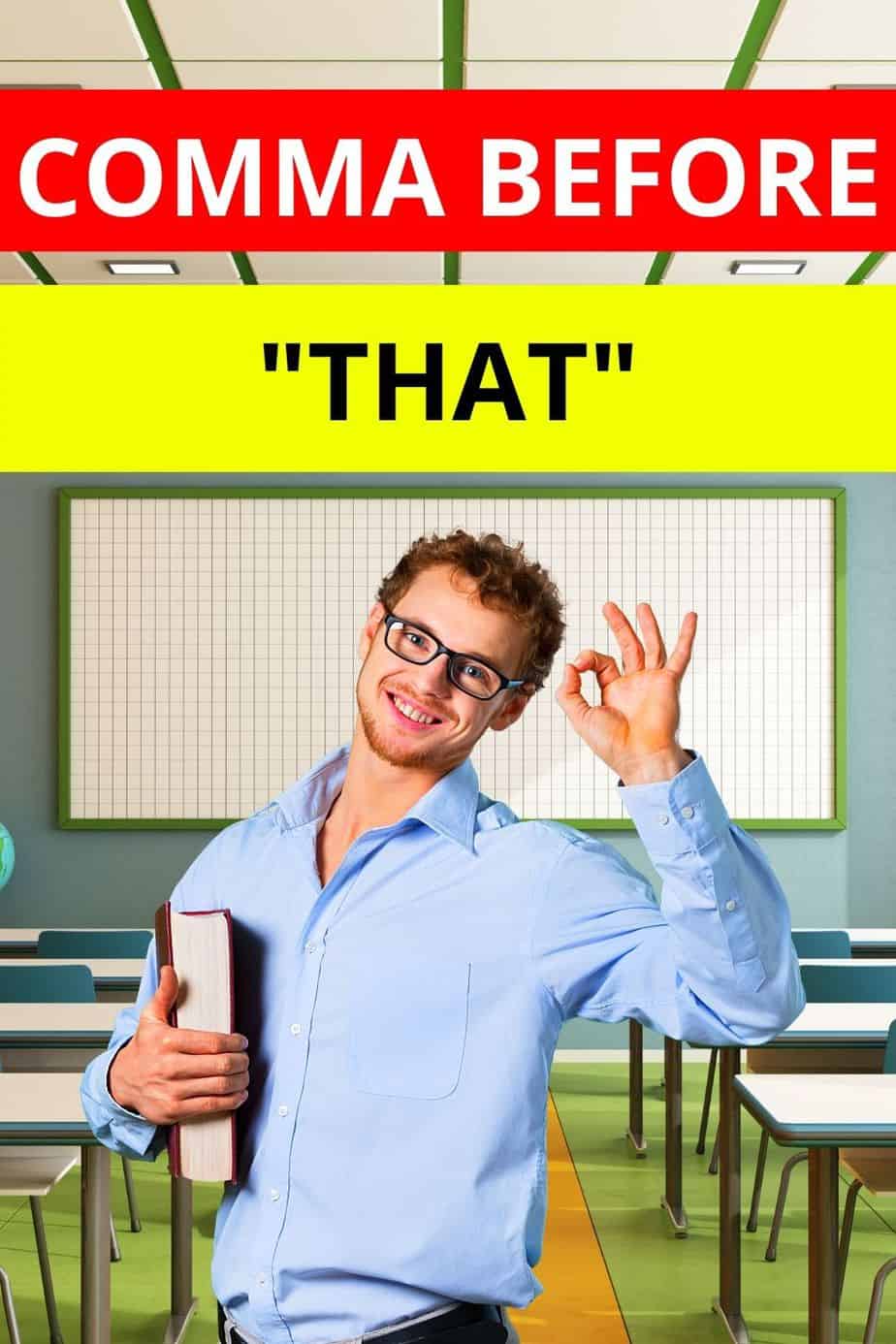 When “that” introduces a mid-sentence parenthesis

A parenthesis can be a word, a phrase, or even a clause that needs the help of commas in sentence construction.

The commas are inserted to let the reader interpret the message with ease, as well as to facilitate an emphatic effect.

No matter where a parenthesis appears in a sentence, it has to be set off with commas to aid textual clarity.

Therefore, a pre-comma is essential when “that” introduces a parenthetical remark in the middle of the sentence.

Here’s an example to illustrate the explanation.

Robert, that guy over there, is actually my sister’s ex-boyfriend.

“That” is used to identify the subject based on the reference point of the writer, in which it particularly functions as a determiner.

The parenthetical clause above is also called a nonrestrictive relative clause, which is a type of subordinate clause that functions as an adjective.

“Who is that guy over there” is the complete clause, but “who is” has been deliberately removed for the sake of providing an example.

Truncated or shortened statements are very common in the informal register wherein the context is often “understood” by the message receiver.

Another common way of using the parenthetical “that” in the middle of a sentence is through the phrase “that is,” the shortened version of “that is to say.”

“That is” or “that is to say,” the widely-accepted equivalent of the Latin expression “id est” that can be abbreviated as “i.e.”, has a particularizing function just like “specifically” and “in particular.”

Here’s how to use it midway.

Humor is characterized by benign violations of social norms, that is, laughter is a result of morally-wrong yet non-threatening conditions.

Lastly, please bear in mind that “that” can be used in any part of speech when it is used parenthetically.

And, this is simply because of the parenthetical information’s grammatical independence from the rest of the sentence.

When “that” introduces an end-sentence parenthesis

To show the other possible parenthetical position that requires a pre-comma to “that,” here’s how to use it at the end of the sentence.

She entrusted her finances to a loyal and trustworthy person, that was what she thought.

Representing parenthetical ideas is not limited to the use of commas only, and thus, square brackets or open and close parentheses may also be observed at times.

She entrusted her company to a loyal and trustworthy person (that was what she thought).

“That” in the example above is used as a pronoun, by the way, which means it replaces the previously-mentioned idea in the same sentence.

Since the guidelines on the necessary pre-comma usage have been thoroughly discussed, it is also crucial that we understand when we do not need one.

The incorrect comma before “that” 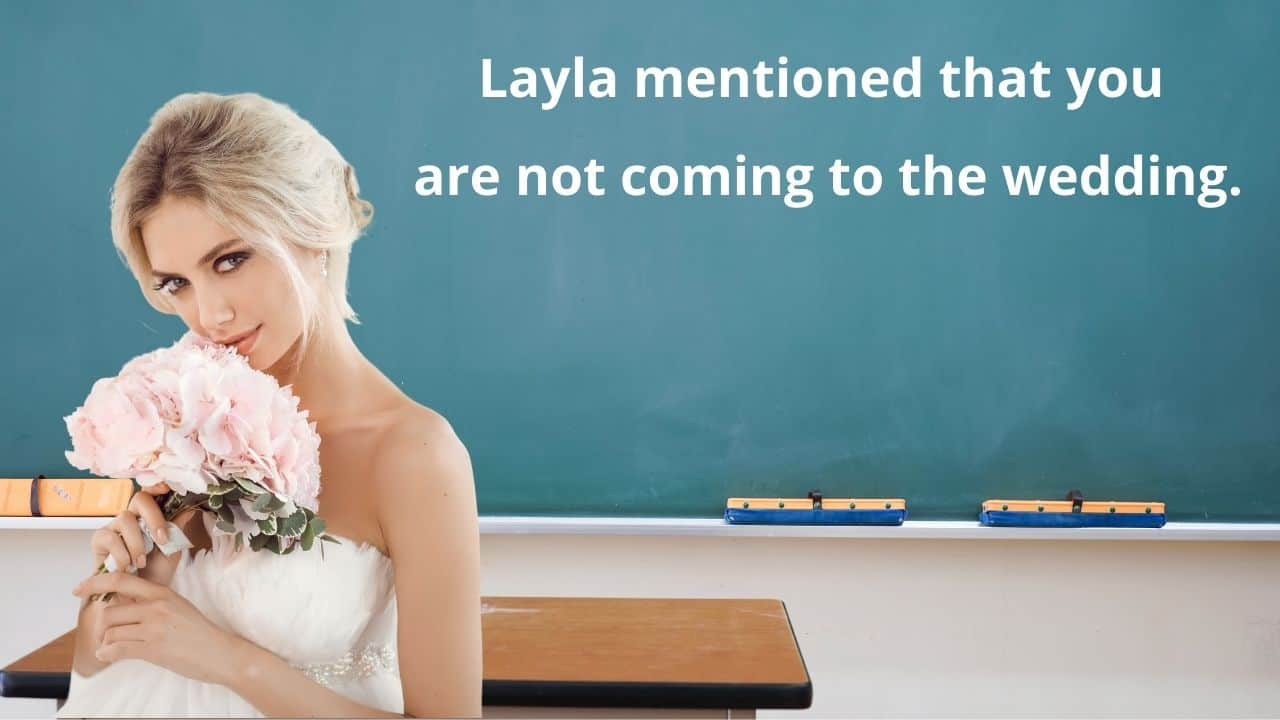 Actually, the pre-comma is often unnecessary before “that” except for the cases explained in the last section.

So, worrying too much about this topic is not a very good idea after all.

To see clearly, though, here’s another set of guidelines on the incorrect use of a comma before “that.”

Again, kindly note that all the circumstances below do not contain parenthetical information, which is inessential to the sentence’s whole unit of meaning.

When “that” non-parenthetically functions as a subordinating conjunction

Subordinating conjunctions are responsible for building complex sentences, which contain at least one dependent and independent clause.

“That” functions as a conjunction when it introduces a restrictive clause that contains essential information to the rest of the sentence.

A grammatical rule in English suggests that “that” should mainly introduce restrictive information, while “which” is used for non-restrictive ones.

Here’s an example to represent what has just been explained.

Layla mentioned that you’re not coming to the wedding.

The restrictive that-clause above functions as a subordinate noun clause, as well as the direct object of the verb “mentioned.”

When “that” non-parenthetically functions as a demonstrative pronoun

The second case that makes placing a pre-comma ungrammatical is when “that” functions as a demonstrative pronoun.

Demonstrative pronouns are used to represent or replace nouns that are either near or far based on the speaker or writer’s perspective.

The three other demonstrative pronouns in English are this, these, and those.

Please never use a comma before “that” when you’re using it such as in the next example.

This is mine and that is yours.

Although placing a comma before “that” in the structure above, the comma may be optionally placed before “and” instead.

A compound sentence often needs a comma before the coordinating conjunction, but it is otherwise omissible when the sentence is clear and short enough.

When “that” non-parenthetically functions as a relative pronoun 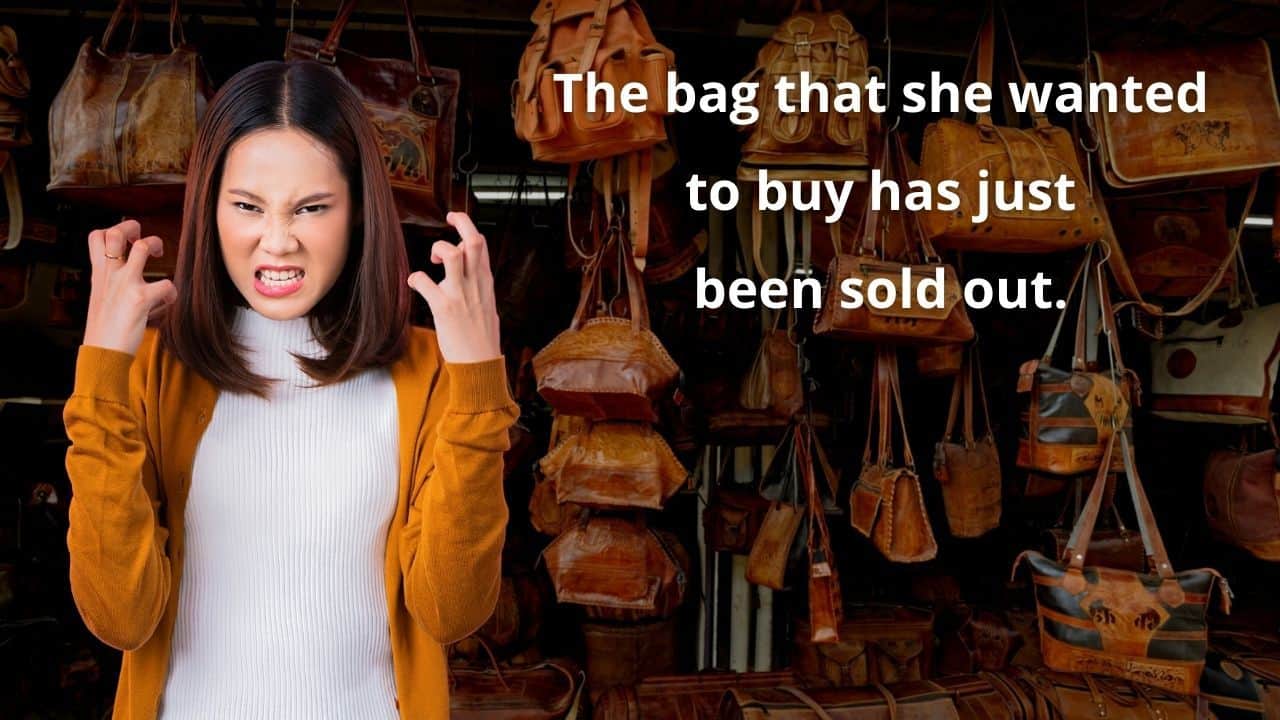 Thirdly, “that” may also function as a relative pronoun in sentences, a type of pronoun used to refer back to an already-mentioned noun.

Just make sure that, again, the information is non-parenthetical, but rather, essential to the overall meaning of the sentence.

Otherwise, you can use “which” for a nonrestrictive relative clause.

The bag that she wanted to buy has just been sold out.

Let’s try to compare the above example’s difference with the non-restrictive relative which-clause.

The Birkin bag from Hermes, which she really wanted to buy, has just been sold out.

As you can see, the subject in the example above is specific enough to be identified, and thus, the relative which-clause afterward is only additional information to the whole statement.

When “that” non-parenthetically functions as a determiner

“That” may also function as a determiner, which is simply a word that comes before a noun that functions adjectivally.

Putting a comma before the determiner “that” in this case is also ungrammatical, unless, of course, used in a parenthetical manner.

Clearly, we can also use the determiner “that” to introduce a serial list such as in “this one, that one, and this too.”

But, this specific guideline has been deliberately eliminated in this post because of its rather obvious implication.

To spot the determinative function of “that,” just look for a noun or noun phrase after it.

So, here’s how to use the determiner “that” in a sentence.

Sorry, but I can’t accept that explanation.

When “that” non-parenthetically functions as an intensifying adverb 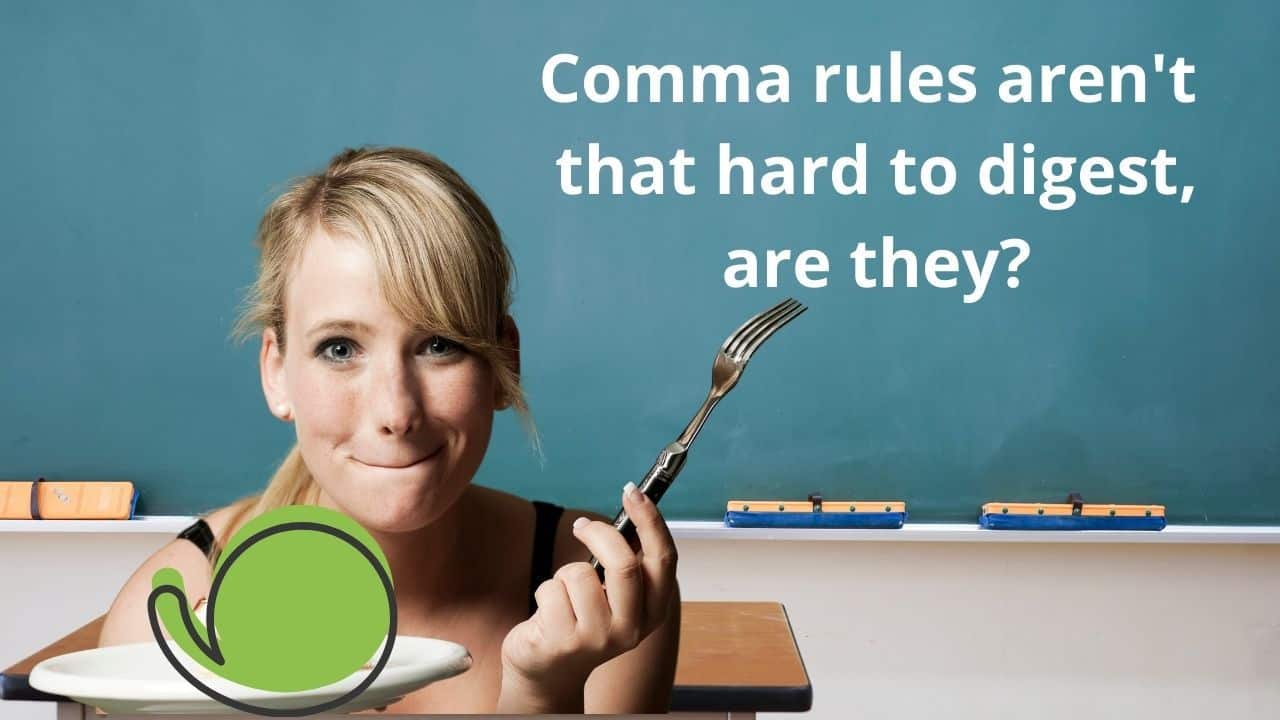 Lastly, “that” can also be used in colloquial English as an intensifying adverb that means “very” or “really.”

Apparently, we must not place a pre-comma as well when it functions this way.

And, the easy way to spot this particular usage is to look for the word it modifies, which is usually an adjective.

Comma rules aren’t that hard to digest, are they?

“That” pre-modifies “hard” in the example above, which can also be replaced with other intensifying adverbs depending on the intended message.

Frequently Asked Questions on Comma Before “That”

Should we put a comma before “that’s why?”

A comma before “that’s why” is only necessary when it functions parenthetically such as in “People generally think that the punctuation system is too complex, that’s why many of us simply groan when asked about it.” But, make sure to limit this type of construction to less formal registers only, as opposed to scholarly texts.

What part of speech is “that?”

“That” is a grammatical homonym that belongs in several parts of speech. It can be used as a determiner as in “that one,” an adverb as in “that simple,” a pronoun as in “that is awesome,” and a conjunction as in “she said that didn’t like it.”

Should I put a comma before “which” or before “that?”

A comma is often placed before “which” instead of “that” to introduce a nonrestrictive relative clause whose meaning is grammatically nonessential to the whole unit of meaning implied by the overall sentence.

Linguistic nuances never fail to leave anyone scratching their heads, such as in the case of punctuating “that” with a pre-comma.

However, it is also essential to note that constant reading, and of course, writing is the best way to amplify punctuation skills, as well as semantic comprehension.