Punctuation-related decisions, particularly with commas, seem to be a chicken and egg situation, even for the most prolific writers.

Why? This is because, contrary to what most people think, that commas are strictly governed by prescriptive rules, they actually aren’t.

This is why we tend to easily get caught in the weeds when writing certain phrases like “after all.”

Since you’re already here on our humble page, please read until the end to know more about how the comma before “after all” works in detail.

Do we always need a comma before “after all”?

Unless “after all” is used as a parenthetical remark in the middle or at the end of a sentence, we need not place a comma before it. A parenthetical remark is a grammatically-insignificant element only used for emphasis and rhetorical reasons, and thus, commas mark their dispensability from the original sentence structure. Although that should be the case in general, parenthetical commas may also be conveniently omitted when the interruption caused is too weak, so long as misinterpretation doesn’t occur.

Using a comma before “after all” in detail

“After all” is an adverb that can be very useful in transitioning our ideas, as well as emphasizing them.

More technically, it is a phrase called adverbial connector whose function is to emphasize arguments that go beyond the common judgment.

For example, we can use “after all” when we want to highlight an opinion that considerations must be made despite any negative circumstances.

I know you don’t like her, but she’s still your mom after all.

Thus, the more complete meaning of “after all” is equivalent to “despite any or all influencing factors.”

More colloquially, it’s just another way of saying “at the end of the day.”

With regards to the comma usage before “after all,” a couple of quick and easy considerations have to be taken to be able to make the decision.

These considerations mainly evolve around the concept of parenthetical interruptions, which is related to stylistics rather than syntax.

What do we mean by these so-called parentheses then?

A parenthesis is a rhetorical or persuasive device used to add extra information which draws the reader or listener’s attention towards the statement being made.

When we speak, we tend to insert ideas that we think would add meaning to whatever we are trying to express, thereby making utterances clearer and more emphatic.

These interruptive thoughts, when represented in written form, need to be offset with commas to mark their grammatical removability, as well as the intended emphasis.

Therefore, a comma must come before “after all” when it is used and treated by the writer as a parenthetical remark rather than a necessary sentence element.

Here are specific examples of how to use “after all” as a parenthetical remark in sentences.

Use a comma when “after” all introduces a mid-sentence parenthesis

As parentheses are only auxiliary devices, they, therefore, are free from the syntactical flow taken by the original sentence form.

Marla deserves the threats, after all the malpractices and trickeries she has done, but I don’t think her mom does.

The parenthetical remark introduced by “after all” in the sentence above helps the reader understand the context better.

And, the pre-comma prompts an easier interpretation that the details are specifically added for emphatic and clarifying reasons.

Use a comma when “after all” introduces an end-sentence parenthesis

Apparently, we may also use a parenthetical remark at the end of a sentence when we do not want the interruption to happen midway.

The advantage of delaying the parenthetical remark is that it allows the original argument to flow freely and clearly first.

Marla deserves the threats to her life, after all.

Putting “after all” as an end-sentence parenthesis without any other succeeding details also allows the reader to freely conclude what the subject has done.

But, if the writer wants to de-emphasize the reason behind the opinion and focus more on the consequence, then the comma may also be removed.

These nuances highlight the fact that the writer’s purpose needs to be considered before making the comma decision. 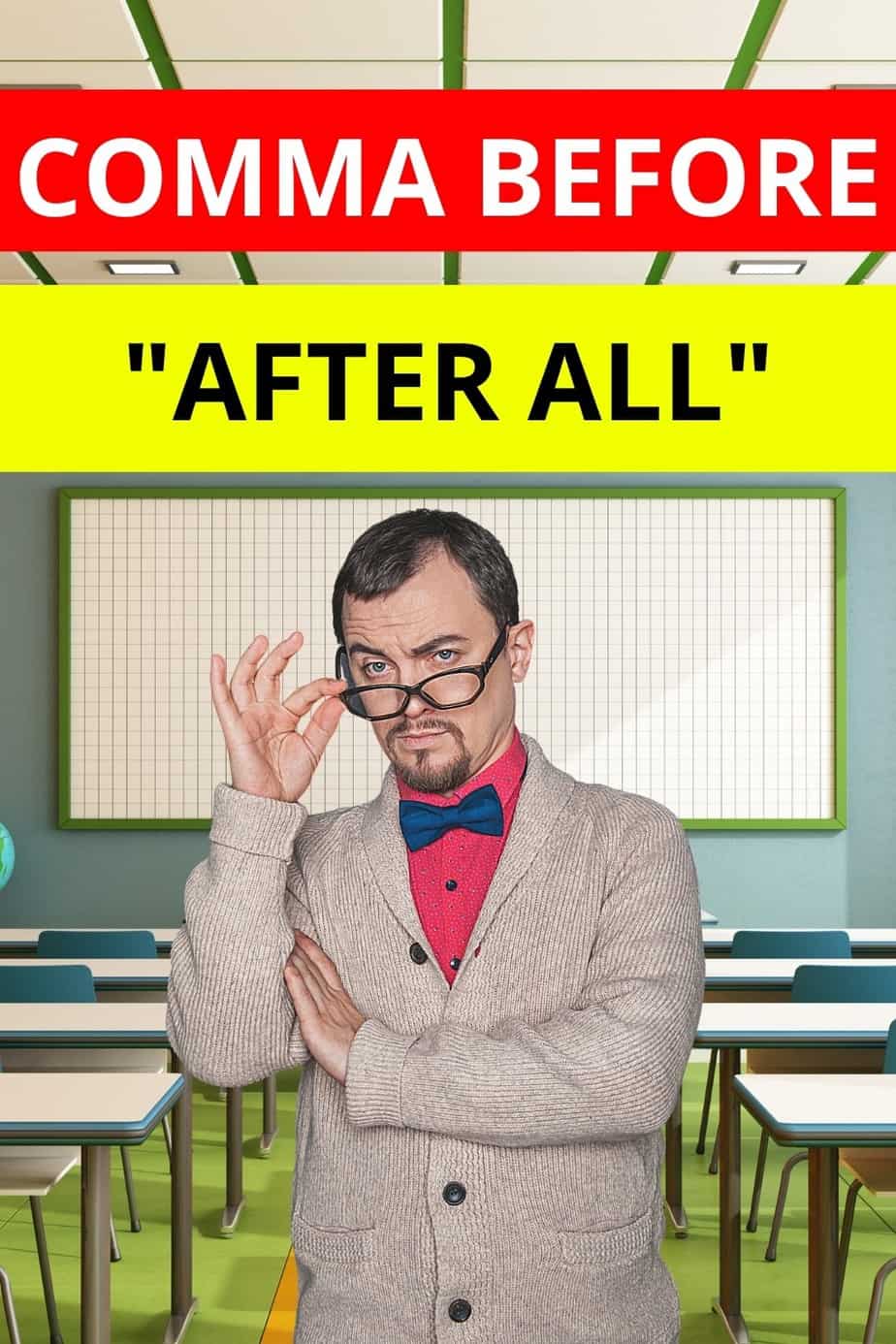 Guidelines on the comma omission before “after all”

Now that we already have a grasp of the pre-comma considerations, let’s also discuss further when the pre-comma becomes omissible.

The next subsections focus on the suggested, but not necessarily prescribed, removal of the comma before “after all.”

After all, comma decisions are, again, not entirely set in stone, which I think you already understand well by this point.

When “after all” weakly modifies a verb

The idea of the comma non-placement before “after all” is simply embedded in weak interruptions and short arguments.

As “after all” is an adverb, it can modify various parts of speech except nouns. First, let’s look at how it can modify a verb but in an unemphatic manner.

She has won after all.

“After all” in the example above post-modifies the main verb used in a short sentence; hence, putting a comma before it may only disrupt the rhythm of a short and complete idea.

Of course, the sentence needs further details and background context to be clearly understood.

But, since I am rather stressing the inessential comma before “after all” in the example, the background details have been deliberately avoided.

When “after all” weakly modifies an adjective

An adverb also has the power to modify adjectives in sentences, which is also true with “after all.”

Here’s an example to show that.

The performance was impressive after all.

“After all” modifies the adjective “impressive” in the sentence above which is also better off without a pre-comma for the same reasons stated earlier.

When “after all” weakly modifies an adverb

And lastly, here’s an example of “after all” modifying the spatial adverb “here” in a sentence.

She still came here after all.

I’d like to add that “here” is a deictic word, in which the real meaning is dependent on the writer or speaker’s reference point.

Thus, it is impossible to assess and validate the exact meaning of “here” without context.

In a nutshell, the easiest way to remember the inessential comma before “after all” is when it causes a weak interruption in short sentences.

Such sentences must be aimed at highlighting the complete idea per se, as opposed to the adverbial phrase “after all” only.

In case these considerations don’t apply, and when the goal is rather to deliberately emphasize “after all” which may or may not have succeeding details, then a pre-comma is needed.

Frequently Asked Questions on Comma Before After All

Do we need a comma before “after all” when it is used at the end of a sentence?

Should it be “afterall” or “after all?”

This adverbial phrase should be written in two separate words (after all) unless the intended meaning is a specific name of an organization, a movement, a book, and so on.

How do we use “after all” in a sentence?

We use the adverbial phrase “after all” when we want to state a conclusive argument aiming to highlight the notion that other influencing factors are irrelevant or insignificant. Or, in more casual English, the easiest equivalent to this phrase is “at the end of the day.”

Kudos to you if you’ve been able to reach this part of the post!

I hope this text has been able to help you out in the least.

As an end note, please do not get tripped with comma-related decisions because, after all, you are, and will always be, the captain of your ship.