If there’s one definite way to describe how languages work, well, I’d probably not be writing this article at all.

Language is complex, albeit novel, and nonetheless arbitrary.

Yes, language prescriptivism has proven to be one of the most effective ways to decode the human communication process.

However, this approach may not be generally applicable for every learner out there.

This means that the power of contextual meaning and message implicatures are also duly important.

So, let’s now try to both syntactically and pragmatically scrutinize the meaning behind “before x” and “by x”.

(I bet this blog could help you meet your deadlines accordingly.)

How are “before” and “by” different from each other?

There are several ways to look at the differences between these two words. The most conspicuous, however, is that before x means anytime prior to “x” while by x denotes the time either prior to or within “x” (= including x).

This means that one would presumably be happier if the boss requires a deadline “by a certain date” because of the extra time leeway.

These words, too, differ in the parts of speech where they belong.

For the sake of this post, though, we will dig some miles deeper into the temporal prepositional function of each word, or its relevance to time.

Humans are capable of making sense of time both hypothetically and realistically.

Because of this, we are able to describe events in a sequential manner by using lexical terms that denote temporal meanings.

We do have the ability to explain different time periods by taking various time reference points as well.

Before, in its simplest denotation, is the opposite of “after”.

Before we moved to Atlanta, my wife had been really difficult to deal with.

In its temporal sense, it refers to an unspecified time neither in the present nor the future.

In other words, if the reference point in a numerical series is “five”, then before must include all the numbers from 4.9 down to all the negative integers only, but not any number equal to or greater than five.

Can we skip the maths, please?

Meanwhile, previous research suggests that using before in demonstrating thought connections could be rather ambiguous compared with after.

This is due to the hypothetical rather than the realistic nature of the event described when using before, especially in introductory clauses.

“After”, on the flip side, can be used to feature events that actually take place instead, and thereby making this easier to use compared with the former word.

After we moved to Atlanta, my wife has become easier to deal with.

This ambiguity may also be connected to some people’s confusion in using before and by in their temporal senses.

Telling them apart may not be that simple for others, but let’s try to differentiate them by focusing on their temporal prepositional usages.

Before “x”: The Temporal Sense

Some parts of speech could be more perplexing to understand and use than others because of the absence of prescriptive guiding rules.

This is especially true in deciding which prepositions should fit in the sentence construction.

Determining the appropriate preposition could drag writers in finishing even just one sentence.

The temporal meaning of before refers to any period preceding another particular occurrence or event.

Therefore, it can never take place anytime within or after the specified time denoted by the word or words succeeding before.

Please call me before dinner.

The problem with the sentence above, though, is how the message recipient would comprehend the time connotation of the word “dinner”.

Does dinner time mean before 7 pm? Or, is it maybe after?

The answer might be dependent on the message recipient’s own schedule, which is quite arguable.

Now, let’s look at another example to make things clearer.

You should submit your monthly report before Monday next week.

If anyone would be given this deadline on a Monday of the current week, then he or she approximately has Tuesday until Sunday to complete the task.

If he or she needs to create printed copies, and, if the company doesn’t operate on weekends, then the submission is expected to be done on Friday at the latest, which is four days later.

But, if the submission can be done electronically, then the report can be submitted on Sunday at 11:59 pm at the latest, which means six days later.

And, on Monday the following week, the report must already be on the boss’ desk when he arrives at the office. 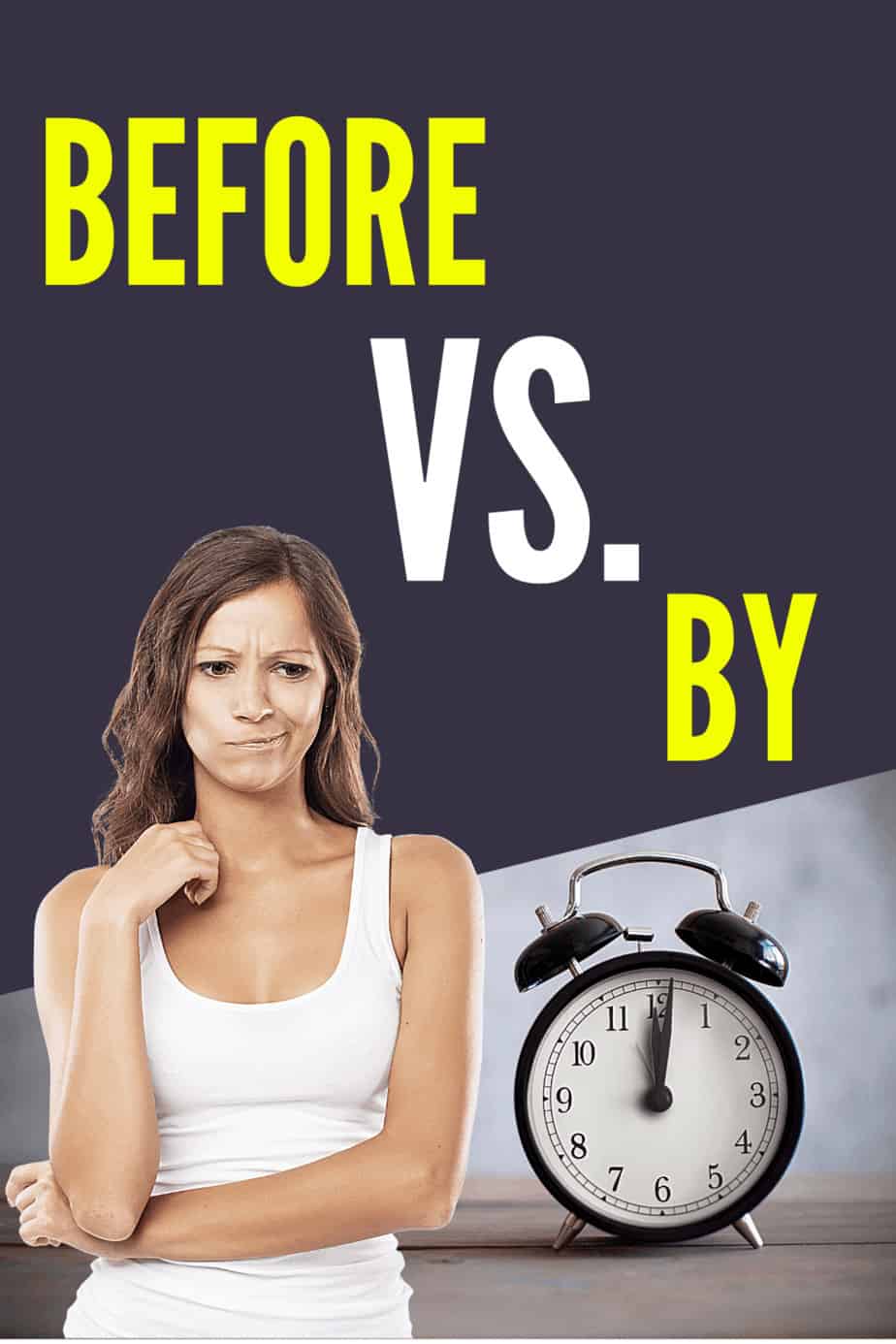 Similar to the above example, by is also a preposition that can be used in numerous ways.

In its most fundamental meaning, by is an identifier of an action-performing agent.

Mom crafted this basket by hand.

Or, as an identifier of the means of transportation.

The tourists came here by coach.

But then again, for the sake of addressing the lexical gap related to before, the temporal prepositional sense will be given the most attention in the following sentences.

The prepositional usage of by means it is directly followed by another noun or pronoun.

To know its temporal sense, the subsequent word is expected to connote a temporal meaning as well, such as names of days or months.

By “x”: The temporal sense

When a sentence makes use of this prepositional pattern, the reader should be expecting something related to a deadline or a due date.

By is indicative of the due date which is inclusive of the timeframe denoted by the succeeding nominal word.

Put simply, this means that while before is only limited to the time preceding the subsequent temporal noun, by encompasses the time implicated within the temporal noun as well.

You should submit your monthly report by Monday next week.

The sentence above denotes a little more leniency towards the deadline stated.

The boss, in this case, therefore assumes that the report may be submitted on or before Monday at 11:59 pm at the latest.

Temporal prepositions may not be as easy as pie, especially for non-native English learners, and for some children learning these words for the first time.

These words could create doubt or confusion which readily needs to be addressed accordingly, especially in the present interconnected world that values diversity.

Hence, if using the right word does not suffice, then explaining a little further, for the sake of avoiding miscommunication, wouldn’t hurt a toe.