The flexibility of language as a communication device allows humans to convey information either colloquially or formally.

Hence, the formal language is preferable for record-keeping, such as in historical texts, as well as in pedagogical practices.

Let’s take a closer look at the formalistic speech device “in which” and learn how to use it in sentences.

How do we use “in which” in a sentence?

“In which” is a formal writing device used to introduce a relative clause that particularly introduces a spatial, temporal, or abstract entity. This type of sentence construction is typically a result of transforming a colloquial statement into a more formalized text in the passive voice. This can be achieved by repositioning the dangling preposition from the end towards the earlier part of the sentence to be followed by a relative pronoun and other specifying constituents. To note again, this type of phrase is more applicable and acceptable in a formal setting.

Using “in which” in spatial, temporal, and abstract contexts

The arbitrary nature of languages enables its users to malleably adjust the expression of information in various settings.

Thus, language has become an utterly important tool in human civilization because of its salience in facilitating information transfers.

Linguistic literacy among humans also entails the ability to cohesively and logically express thoughts related to time, space, and other abstract ideas.

“In which” serves as an essential cohesive device that facilitates the formation of logical and definitive statements particularly in formal texts.

Obviously enough, its usage is not limited to formalized settings alone, but it is more likely observable in such circumstances.

This phrase is typically used to express contexts to specify nuances in spatial, temporal, and other abstract elements in formalistic discourse.

Using “in which” to substitute a spatial antecedent

“In which” may be used in referencing relatively specific spatial information when a single word is not enough to express the intended meaning.

Sometimes, we need to do this to particularize subtleties in describing the exact place where circumstances occur.

Using “in which” is an effective way to convey information that appears to be occurring within or inside another entity.

I went to a musical theater in which a traditional Chinese opera was held.

The sentence above precisely describes the space inside an enclosed theater where the opera took place, as opposed to any vague location.

It further implies, conveniently, that the subject physically went inside the theater and witnessed the opera per se.

Grammatically speaking, the preposition “in” is also replaceable by “at” in the same sentence, albeit entailing a rather obscure, less definite environment in the process.

I went to a musical theater at which a traditional Chinese opera was held.

In fact, the statement above would not necessarily mean that the subject witnessed the performance inside.

The usage of “at” could nonetheless suggest that the subject could have only gone anywhere near the theater, as the basic meaning of “at” contains this denotation.

Another way to express a similar sense is by using “where” instead of “in which.”

This usage is noticeable in the conversational discourse which also indefinitely describes locative entities.

I went to a musical theater where a traditional Chinese opera was held.

To sum, relatively speaking, the most precise way to represent the meaning of physically witnessing the opera inside the theater is by using “in which.”

Using “in which” to substitute a temporal antecedent

Apart from spatial contexts, “in which” may also be used to refer to temporal elements in conveying information.

Again, the main purpose of employing this phrase is to specify time elements in order to attain informational accuracy.

In the 1880s, the era in which Hawaii was not yet officially part of U.S. territory, Japanese immigrants freely inhabited the archipelago.

Using “in which” helps in pointing out the temporal element denoted by the period implied in the context.

It gives additional and specific information relative to the time expression in the sentence.

“In which” may also be substituted with “when” should the writer opt to do so, entailing, however, a less precise meaning applicable in less formal settings.

In the 1880s, the era when Hawaii was not yet officially part of U.S. territory, Japanese immigrants freely inhabited the archipelago.

Note, though, that it is not recommended to substitute “in which” with the relative pronoun “that” grammar pedants in this case.

More importantly, “in which” must never be replaced with “where” as the context the relative pronoun refers back to the word “era,” a temporal noun. 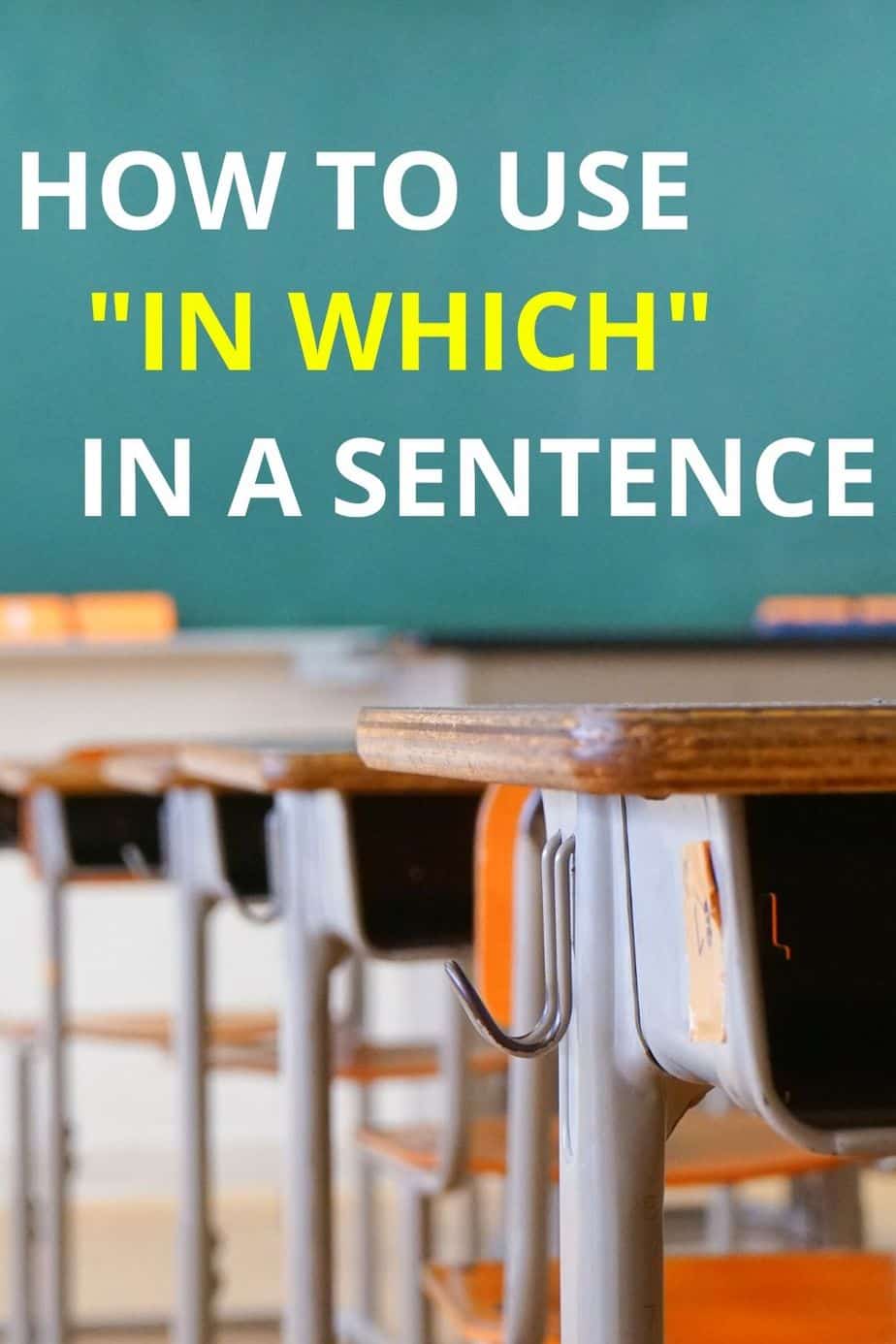 Using “in which” to substitute an abstract antecedent

Advanced linguistic knowledge is also significantly linked to the ability to understand and utilize abstract concepts in discourse.

Abstract entities are non-concrete, ambiguous ideas such as a certain state or quality that are only understood rather than seen.

These concepts, in particular, are replaceable by the pronoun “which” as they are also considered inanimate in nature.

The socio-cultural setting in which a language functions significantly affects the learner’s acquisition process.

“In which” specifies the meaning denoted by the abstract subject “socio-cultural” setting.

The other constituents after “which” further elaborates the concept involved.

“When” and “where” are inadvisable substitutes since these pronouns are specific replacements to temporal and spatial word elements.

Understanding “in which” in detail

The technique of using “in which” in sentences implies a fairly advanced linguistic skill.

This is true because this type of sentence construction is not taught sooner than third grade and is not suitable for beginner English language learners.

This also means that understanding the linguistic formation and sentential application of “in which” requires relatively advanced guidelines.

Provided in the next subsections are the morpho-syntactic backgrounds of “in which.”

A morphological background of “in which”

The phrase “in which” is characterized by the combined features of prepositions and pronouns.

Each word is essential in conveying a particularized meaning intended by the writer, especially in formal contexts.

The next subsections tackle each word and its category at length.

“In which” is comprised of a preposition attached to a relative pronoun.

“In,” being one of the most frequently used prepositions, is of Old English origin that could be used both in temporal and spatial thought representations.

Prepositions serve as screws that link nouns or pronouns to other sentence constituents, hence the presence of “which” afterward.

The relative pronoun “which”

Meanwhile, “which” is a relative pronoun used to replace or substitute inanimate entities including words related to time, space, and abstract ideas.

“Which” may also be referred to as the object of the preposition in the “in which” phrasal construction.

It is used to replace a previously stated noun, known as an antecedent, which is also essential in creating non-redundant language patterns in sentences.

A syntactical background of “in which”

The application of “in which” in sentences is particularly linked to the concept of dangling prepositions.

The object is placed somewhere earlier in the sentence instead, while the preposition is usually found at the end of the sentence.

These trailing prepositions are mainly observable in informal sentence construction such as in the example below.

This is the house we live in.

Also, it necessitates the addition of the relative pronoun “which” to particularize the antecedent or the subject.

This is the house in which we live.

Although the statement sounds a bit awkward and misshapen, it means completely the same as the earlier example stated in a more conversational manner.

Ergo, the type of audience and the goal of the text have to be strictly taken into account by the writer so as not to prompt any unintentional misinterpretation.

The conscious act of using “in which” in the sentence construction elucidates higher levels of linguistic competence as well as higher-order thinking.

When used appropriately, it can facilitate a more logical manner of representing powerful argumentative statements, especially in formalistic documents.

Therefore, this needs to be accordingly incorporated in pedagogical linguistic practices.