One of the most grueling decisions to make in writing is related to punctuations, especially commas.

What else complicates writing?

Adverbs, of course. Especially those with multiple personalities.

This post’s goal is to address comma-related decisions with an adverb of focus having an idiomatic function — in particular.

Do we need a comma before or after “in particular”?

Commas are essentially needed before in particular when utilizing it as a parenthetical component.

A comma is also necessary after it when used as an introductory phrase to a complete sentence or a secondary clause.

Two commas are placed, before and after in particular, when it is parenthetically inserted mid-sentence.

However, in modifying adjacent nouns and noun phrases, commas are inessential either before or after in particular.

Comma before “in particular”

Thought-insertion in reference to an implicated idea within a sentence is referred to as parenthesis or parenthetical speech elements.

These expressions allow the writer to provide further clarifying details about a clause or sentence fragments.

Parentheticals, however, are grammatically inessential but stylistically emphatic.

3.1 Using in particular as a parenthetical element

A comma is always necessary before a parenthetical expression that starts with in particular.

That dog, in particular the one with the largest forehead, has the best temperament among the pack.

Using in particular as a single parenthetical expression is also possible and commas are needed both before and after it.

If the company would prohibit the use of cellular phones in work stations and, in particular, if allowed only during lunch breaks in the pantry area, then it is possible to solve customer complaints related to lengthy call holds.

Comma after “in particular”

In particular may be used in introducing a clause too, or as an introduction to a second independent clause.

When this happens, it functions as an adverbial connector, still having the purpose of specifying information within the clause.

In particular as an adverbial connector

In particular may appear as a conjunctive adverb in front of a sentence that requires a comma placement following it.

Since it modifies the whole sentence, we may also refer to it as a sentential adverb in this manner.

In particular, my neighbor on the left has been quite loud this week.

(Implication: I have several neighbors but the one residing on the left side has been constantly playing loud music throughout the week.)

Or, it may also be placed as a second independent clause introductory phrase separated by a semicolon.

She travels a lot; in particular, she loves going to the Caribbean in the summer holidays.

(Implication: She is a constant traveler and she loves going to the Caribbean islands in summer, not in Oceania nor Southeast Asia.)

In particular as a parenthetical

As parenthetical expressions need the encapsulation of commas to single out the information from the rest of the sentence, a comma is also necessary when in particular appears as the last phrase in the parenthesis.

My brother, the eldest one in particular, is the only unmarried person among us.

To recall an earlier-mentioned detail, a comma is, again, also placed after in particular when used as a single-expression parenthetical. 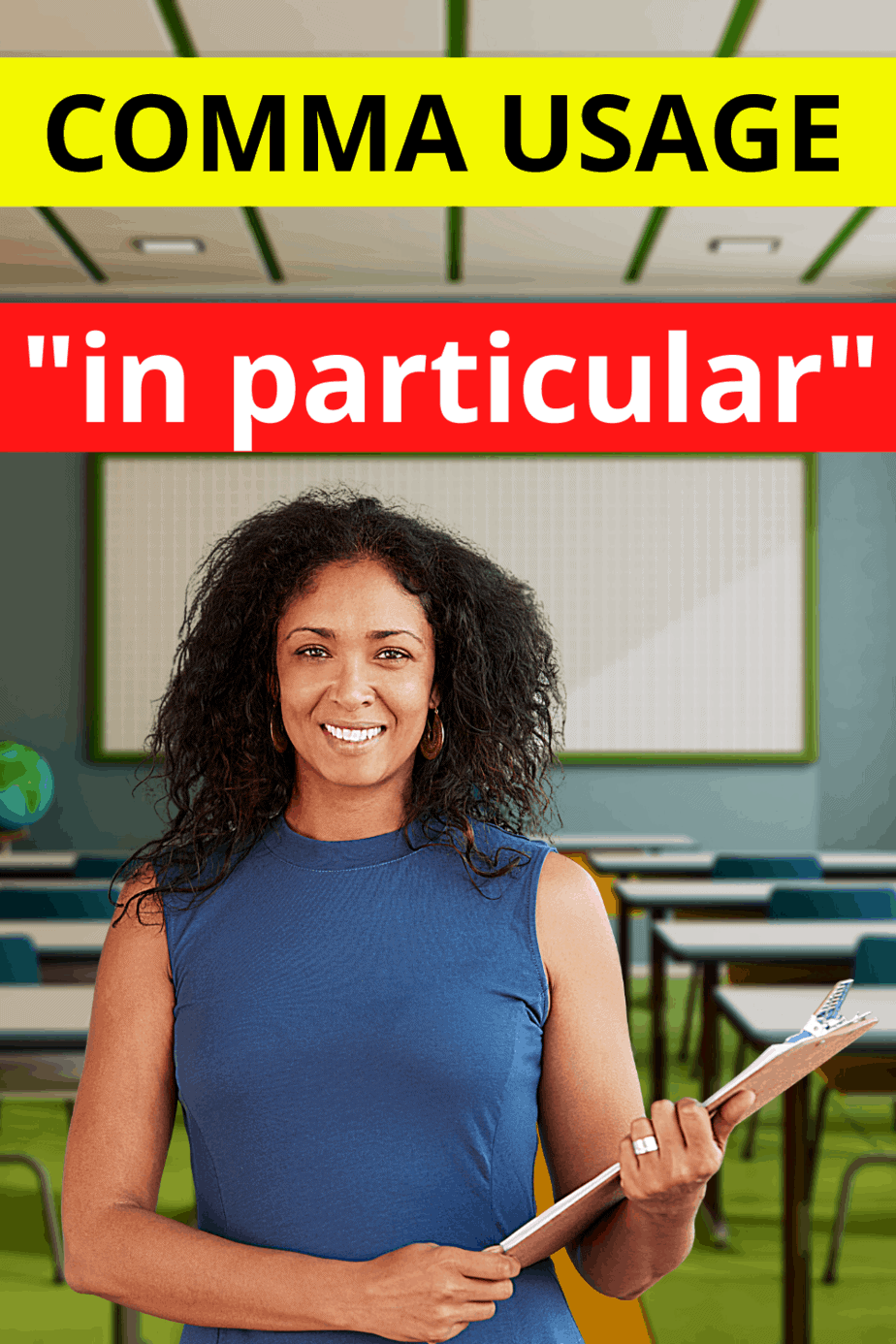 When is a comma not necessary before or after in particular?

In particular is an idiomatic phrase that syntactically functions as an adverb in a sentence.

More specifically, this is also known as an adverb of focus particularizer which helps in identifying a specific thing, person, or concept within the speech.

Using in particular in statements

Being an adverb with a particularizing function, the modifying ability of in particular particularly applies to adjacent nouns and noun phrases.

When it is used to accentuate nominal units, a comma would be superfluous and would create choppiness or unnecessary breakouts; thus, it is neither clipped before or after.

In declarative sentences, particularizers are often preceded by the noun or noun phrases it aims to identify.

Of all Sacha Baron Cohen movies, the latest one has the meatiest politically satirical scenes in particular.

(Implication: Sacha Baron Cohen has several other movies with political satires but the last one, as per the writer, has the richest scenes.)

To date, Shop X in particular has had the worst sales impact for a decade now.

(Implication: Compared with other existing shops, Shop X has been the least performing store since a decade ago.)

Using in particular in questions

We may also ask for a specific response from another interlocutor using in particular in both oral and written speech.

This type of utterance still occurs with the same purpose, to prompt a specific response from a reader or listener based on a relatively general question.

(Implication: I already know that you like coffee, but I want to know which coffee brand is your favorite.)

What in particular did you hate about your ex-husband?

(Implication: I want to know what specific trait made you end the relationship with your ex-husband.)

Although having the same intent which is to bring out a specific sentence fragment or unit, grammatical difference exists between the two expressions above.

Even though both expressions may adverbially function in a sentence, one is less flexible than the other.

Particularly has the ability to modify verbs, adjectives, and other adverbs; whereas, we cannot use in particular as a direct substitute to particularly.

INCORRECT: He knew the professor might fail him, regardless, he took the oral test.
Correct: He particularly runs on Sundays.

Moreover, a difference in each expression’s lexical meaning may also be observed.

While in particular denotes the meaning “in distinction from other related elements”, particularly suggest the denotation of “in detail” or “to a higher degree than usual”.

The following sentences make use of particularly modifying a verb, an adjective, and another adverb.

Verb: He particularly goes for a jog in the park on Sundays.

Adjective: This bag is particularly heavy.

Adverb: We visit our grandparents particularly every Thanksgiving.

Unfortunately, dealing with adverbs and punctuations can be nonetheless confusing, but if we take the time and effort to understand their usage in detail, they can become highly effective writing weapons.

To sum the essence of the above discussion, we normally punctuate in particular with commas mainly for stylistic purposes; however, it is only grammatically set off with a comma when used as an adverbial connector at the beginning of a clause.

The use of both efficient and creative writing strategies, albeit tasking and perplexing, implies linguistic literacy and competency that cannot be stolen away by anybody.