The written system of non-lexical items in texts is known as punctuation.

Punctuation marks are guiding signs for readers so the words do not crash into one another, thereby preventing word traffic collision.

In short, punctuation marks are the traffic signals in the crowded community of paragraphs.

And why are these marks important?

Of course, they’re there to prevent chances of misinterpretation which could inevitably lead to misinformation.

Now, let me walk you through the comma usage before the eloquent-sounding conjunction albeit.

Is a comma necessary before “albeit”?

Yes! A comma regularly comes before our contrastive conjunction albeit, and it is usually followed by noun phrases, adjectives, adverbs, and parenthetical elements.

However, we do not connect two independent clauses with albeit, and we also need to avoid using it as a direct replacement to although.

Moreover, we need not place any commas before or after albeit when it appears in an introductory phrase, but we should put a comma after the last word of the opening phrase. 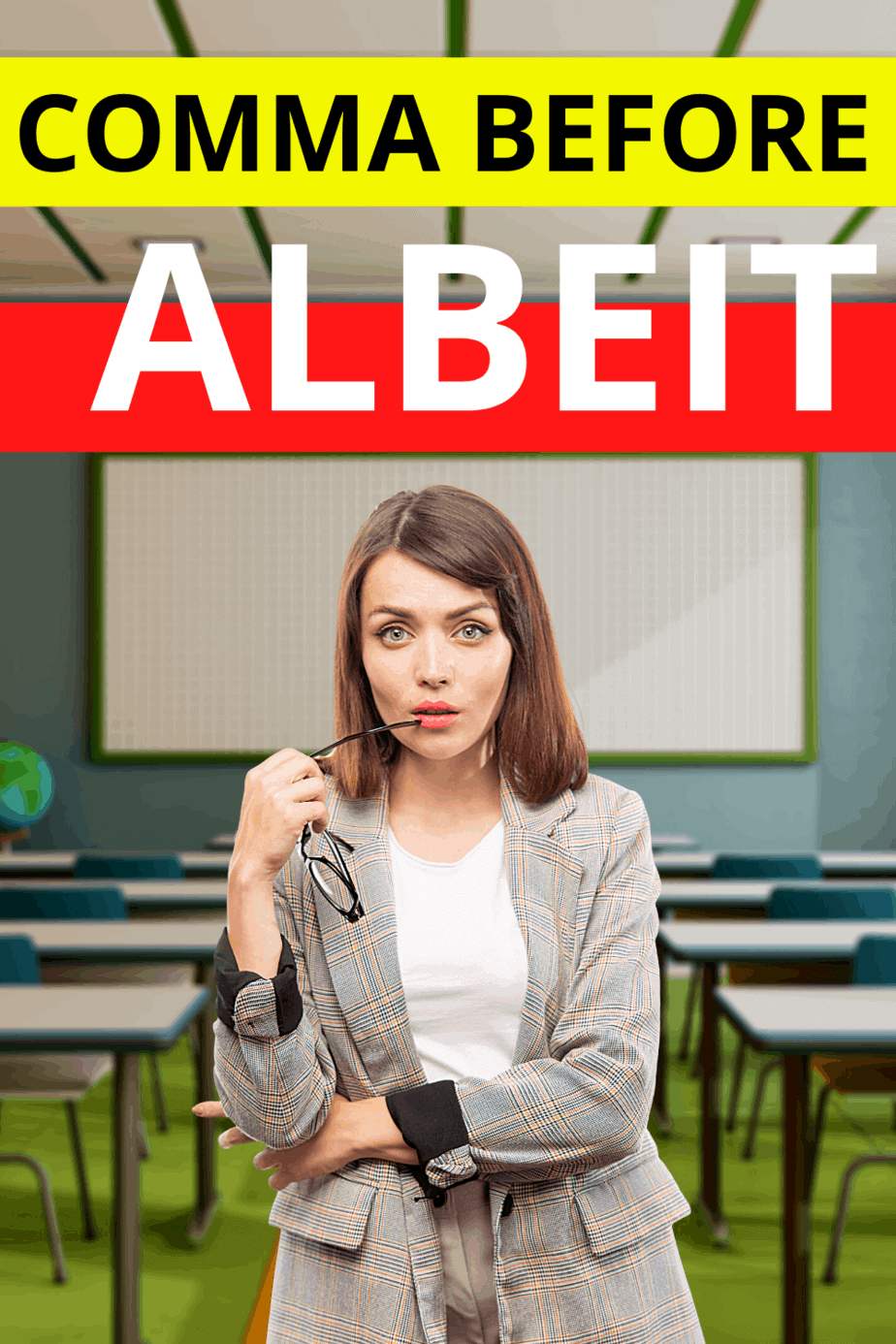 Comma before “albeit” in more detail

Albeit, syllabically pronounced as “all-be-it”, is a type of conjunction that has a contrastive function.

Its literal meaning is pretty close to other more commonly-used connectives such as although, even though, or even if.

The role of contrastive connectors such as albeit is to illicit impactful coherence of contrast or binary negation of ideas.

Another major responsibility of albeit is to shorten the lengthy details of a second argument which is why we need to avoid connecting another independent clause after the main clause.

Usage of this connective device may exemplify linguistic sophistication, albeit with a rather formal and slightly archaic piquancy.

Have you understood my usage of albeit in the previous sentence?

If not, let’s dive a few more miles deeper.

“Albeit” and noun phrases

We may tie noun phrases with albeit at the end of the sentence and a comma is always necessary before it.

Again, the purpose of connecting ideas with albeit is to demonstrate the dissimilarity of two arguments minus the repetition of already-implicated details.

Therefore, we can always assume that one idea must either be “worse” or “better” than the other.

The song “I Am” by Leilani Wolfgramm has an upbeat melody, albeit with a heartbreaking backstory.
I think “Barking Dogs Never Bite,” a Korean movie, has an incredibly comical screenplay, albeit with several gut-wrenching scenes.

Adjectives, in their most basic function, describe nouns and pronouns

More specifically, they are evaluative descriptors used to qualify or quantify the properties and features of another word entity being described.

Thus, they play a crucial role in understanding both the physical and conceptual attributes of a particular noun or pronoun.

Albeit may also be interlaced with adjectives in sentences.

That cutting tool still looks sharp, albeit heavy.
Scaphism, a form of torture in 400 BC, was utterly abominable, albeit creative.

While adjectives describe nouns or pronouns, adverbs, on the other hand, add extra layers of information to verbs, adjectives, or other adverbs.

Using albeit with adverbs is also commonly done and it does require a comma placement as well.

Her proposed solutions came about from nowhere, albeit rather unexpectedly.
Still groggy from the surgery, he propped himself against the wall and headed towards the bathroom, albeit unsteadily.

Another recommended writing technique is the use of parenthetical expressions.

Oftentimes, these expressions are inserted midsentence as an interruptive thought whose sole purpose is to add some spice to the statement.

Ergo, using parentheticals is a stylistic choice rather than a rule of thumb.

But then again, color television is way better than black and white; therefore, parentheticals are still a practical writing strategy to employ whenever necessary.

Information consumption via the internet, albeit with unconscious repercussions, may not be eradicated in a snap.
She has forgiven him, albeit reluctantly, for the nth time around.
This year’s autumnal foliage, albeit lacking vibrance, is still picturesque.

When is a comma not necessary before “albeit”?

Although this might be a relatively rarer case, it is also possible to find albeit at the beginning of a sentence.

This may happen when the writer aims to reduce the strength of the contradictory phrase while shifting the focus to the main clause instead.

When sentences are structured this way, it is easier to predict what’s coming in the second part of the sentence.

Albeit uneconomical at first glance, this house is definitely worth your monthly mortgage.
Albeit a little wobbly, he stood up and headed to the nurse station.

Obviously, commas are unnecessary at the very beginning of the sentence, and this is undebatable.

The difference between “albeit” and “although”

Despite having a fairly similar meaning to although, the conjunction albeit is not always a direct substitute to the former connective.

Morphologically speaking, albeit is the compounded result of putting three morphemes  (all, be, and it) together, whereas although is the combination of “all” and “though” only.

Notice that the former conjunction contains a verb but the latter doesn’t; thus, albeit is not used to connect another independent clause which would then contain another verb in it.

That was indeed a great speech, albeit a painful one.

What I was actually intending to say in the above sentence is, “That was indeed a great speech, although it is a painful one”.

This means that the easiest way to remember the usage of albeit is that it is rather equivalent to “although it (be)” instead of “although” alone.

As mentioned several paragraphs ago, we mainly use albeit to prevent lengthy and redundant details.

Although we tend to feel intimidated by more advanced cohesive devices such as albeit, we must not hesitate using this type of conjunction in writing.

However, we must also bear in mind that this word may not be suitable to use in informal speech situations; therefore, caution is advised.

Commas, besides, are responsible for short pause initiations just like the yellow traffic signal lights.

A good thing to remember about commas (even if they die out in the future) is that they are generally responsible for the stylistic flow and rhythm of sentences; hence, they deserve a couple of pats on their backs, too.