Economic development induces the need for technological and business advancements.

These inevitable, nonetheless exponential, progressions have dramatically affected most, if not all fields of disciplines including linguistics.

Morphological truncation or word shortening has been consistently on par with communication agent developments such as mobile phones and computers.

While this process is already tricky, it is needless to say that the interaction of shortened words with punctuations further ravels the issue.

Hence, read on if you’re interested in learning further about abbreviations and commas. 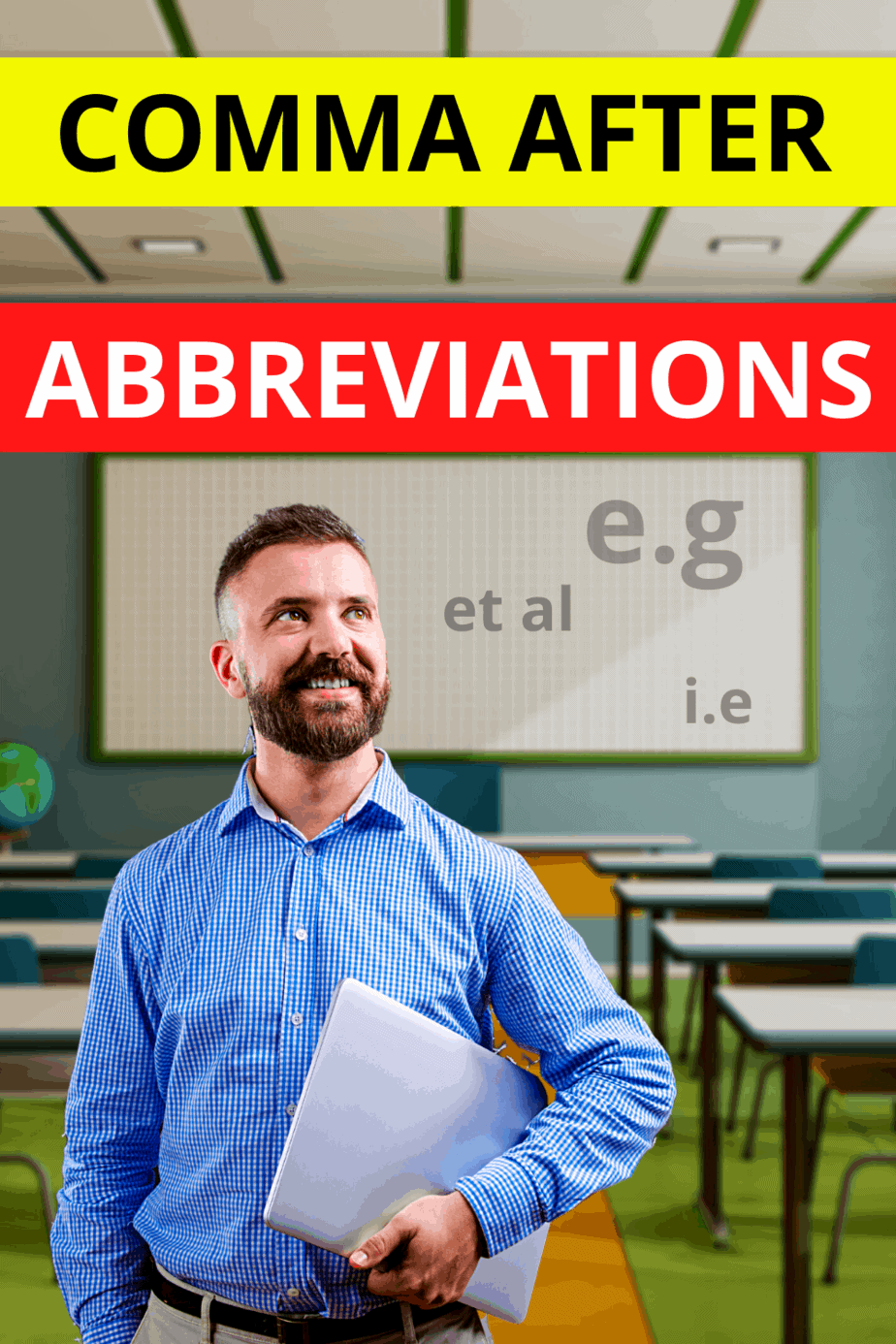 Do we need a comma after “abbreviations”?

Depending on the sentential location and the purpose of writing, a comma may have to be fixed after abbreviations in a number of cases.

The first, and, maybe even the most conspicuous, case is when abbreviations are listed in series.

The next one is when an abbreviated word is used as the last word in a nonrestrictive expression, known as a parenthesis.

In connection with the previous sentence, a comma may also appear after an abbreviation if it is directly followed by a parenthetical expression.

Introductory statements, especially dependent clauses, ending with abbreviated words should also be set off with a comma before attaching the main clause.

Moreover, abbreviated names of places used in addresses, such as province and state names, require post-comma placements as well.

Name titles that come after the complete name have to be set off with commas, too, to highlight the achievement of the person.

Before we discuss each specific case in detail, it is crucial to understand the scope of abbreviations first.

What exactly are abbreviations?

It was derived from the Latin word brevis which means “short”.

Historically, abbreviations have already been used in stone or wood inscriptions for the sake of record-keeping and information-sharing.

Well, nobody probably wanted to hurt their hands from gripping iron chisels 24/7 so they kept texts as short as possible.

Digression aside, the modern world has intensified the usage of abbreviations, especially over the internet for space-saving reasons, and perhaps out norm conformation too.

The most common abbreviations are taught in English, i.e., name titles and Geography, i.e., states and countries, and even in Math, i.e., quantities and Science, i.e., chemical elements.

To lay down the linguistic basis of abbreviations, let’s now look at some of its most common types.

Initial letters chopped from their original words and arranged in series have undergone the process called alphabetism or initialism.

Initialism enables the shortening of word series by only pronouncing the first letters separately.

Some of its typically-known examples are FBI, PDF, CCTV, FB, IG, NSFW, and AFK.

You have probably guessed the meaning of those initials at first glance, haven’t you?

Other relatively less common initials are UG which stands for Universal Grammar, SLA or Second Language Acquisition, and CS or Code Switching.

The previous examples are common jargons in linguistics, which implies the field-specific usage of initialism as well.

The presence of initialism in both generic and specific fields implies the prevalence of its occurrence and thus making this topic worth-discussing.

Let’s move on to another interesting type, acronyms.

Acronyms are probably less boring, albeit creative, and more tongue-friendly than initialisms.

Although this abbreviation type is oftentimes confused with the former, it is rather easy to tell them apart.

While initialisms disproportionately syllabicated, acronyms can be pronounced as an independent word and thereby prone to lexical normalization.

The downside to this is our tendency to forget the original lengthy forms such as in radar (radio detection and ranging), AWOL (absence without official leave), captcha (completely automated public Turing test to tell computers and humans apart).

Acronyms heavily started sprouting during the first half of the 20th century, when hot wars were still nations’ hobbies.

The sprawl of acronyms could be traced to the need for communication concealment, information brevity, and even novelty.

In modern times, though, the other motivating factors affecting the formation of acronyms are the need for social belongingness and affirmation.

I guess I have already elaborated this part fairly clearly, so it’s about time to shift to the relevance of old languages to modern-day abbreviations.

I hope you’re still with me.

Even in the world of contemporary English, remnants of old languages still prevail.

This can be observed by the use of Latin-based abbreviations that we would more likely notice in more formal environments (although not limited to) such as academic and legal texts.

Notice the dominance of the initialism process in the examples which implies its rather early usage compared to acronyms.

Now that we have understood abbreviations, explaining comma usage after them should need less effort.

Commas are used as non-lexical written symbols that aid sentence intonation and rhythm.

They act as guiding lights for readers not to get off-trail from the savage jungle of words.

The placement of commas in sentences could either be grammatically or stylistically-related which means that there may or may not be some rule of thumb to follow depending on the writer’s intent.

Here are a few comma-placement rules after abbreviations.

The function of commas in serial lists seem to be the least intriguing among all the others in this section.

When more than two abbreviations are listed in sequence, a mandatory comma is inserted after each word.

However, a final comma, a.k.a the Oxford comma, preceding the coordinating conjunctions and or or is optional, though.

I have learned in this blog that POW, ASAP(,) and AIDS are referred to as acronyms and that they’re different from initialisms.

One of the most successful ways of replicating oral speech in written texts has been achieved by the insertion of parentheses.

With that being said, we can deduce that they are interesting and yet they do not affect the well-formedness of the original sentence even when taken out.

These grammatically-dispensable statements have to be singled out with commas to highlight their distinction from the other sentence elements.

In reference to the previous explanation, we can now conclude the necessity of a comma after an abbreviated word used as a final parenthetical unit.

Abbreviations that can be pronounced as single words, such as radar and captcha, are called acronyms.

To continue further on parentheticals, if an abbreviated word comes before the interruptive thought, a comma is also mandatory.

Acronyms such as radar and captcha, which I can’t recall the exact original forms, are actually abbreviated words.

In writing introductory words, phrases, or clauses, a statutory comma is always hooked to signal logical relations and to alert a quick pause for the initial context to sink in.

Therefore, when an abbreviation is used in this manner, a comma should also come right after the abbreviated word.

In Applied Linguistics or AL, the main focus is the practical application of linguistic principles wherein research-based solutions deem to resolve language-related challenges in society.

In marking the distinction among street, city, state, and country names, comma placement is a priori.

Although we might mostly write addresses in business letters, and, electronic forms offer separate tabs for each specific part, it is still worth-knowing the correct format.

With this, we can easily impart this basic knowledge to kids minus the quick consultation to Mr. Google.

The same rule constantly applies when addresses appear within sentences, therefore we need a mandatory comma after any abbreviated word.

The sentence above is most likely intended either for official documents or maybe someone who is not that familiar with the map of the U.S.A because of how complete the address is written.

Here’s another sentence that makes use of city abbreviation before the state only.

After we moved to ATL, Georgia, my wife has become much less annoying.

Seems quite like an unhappy husband, but at least he could use commas properly.

You would agree with me when I say that we do need to flaunt our educational and professional achievements, right?

I mean, no one would probably be willing to take some four to six additional years of exhaustive research and study for nothing.

Thus, university degrees and other special achievements definitely have to be highlighted, at least with formal documents.

On top of that, especially when you intend to show credibility, name titles have to be separated by commas in written text.

In most cases, a name title abbreviation comes after the complete name of the person.

Commas, therefore, have to be placed after these titles, should they appear in sentences.

Jefferson Moore, D.D.M., has been serving the community at approximately 25% lower than other dentists’ rates.

Wow, he’s been quite an awesome dentist!

Note, though, that despite some style guides allowing the omission of periods in separating letters in name titles, the periods allow the rather straightforward emphasis of the achievement.

Therefore, the writer’s intention would play a major role in this comma-decision aspect.

Common Latin abbreviations, as shortly explained earlier, are the leavings of ancestral languages.

With all due respect to this dead language, the least we can do is to use and punctuate them correctly.

These abbreviations are to be treated as parenthetical elements, and therefore commas have to encapsulate them.

Standard comma rules suggest that a comma has to be placed after any abbreviation used for listing items.

Previous studies (e.g., Wilson & Morris, 2009; Avery, 2008) have supported this conclusion.
The shop will continue to promote their product next month by offering their standard discount, i.e., 25% off on weekdays.

Although communicative convenience and swiftness reasons compel us to use abbreviations in texts, readability is far more important.

All writers must not immediately assume that the accessibility of abbreviations correlates to text comprehensibility, especially when writing for a global audience.