Have you ever silently scolded yourself for being confused about whether to place a comma before a word in a sentence?

Well, as far as the complexity of the English language is concerned, pondering upon these things is but normal.

Before scrolling further, maybe a cup of joe would help you focus more on this comma-related post, particularly before “resulting in.”

When should we place a comma before “resulting in”?

A comma before “resulting in” generally occurs when it introduces parenthetical information either halfway through or at the end of a sentence. Parenthetical elements are grammatically-removable ideas added to make sentences more interesting and meaningful. However, when “resulting in” is simply used either as a verb or an adjective whose meaning is essential to the rest of the sentence, we need not place a pre-comma at all.

“Resulting in”: Meaning, Function, and Usage

“Resulting in” is the present participle form of “to result in” whose main job is to introduce effects or consequences of actions or events.

A present participle is a word added with -ing at the end which serves a lot of purposes in sentence construction.

The most common usage of present participles is to inflect a verb in its past, present, or future progressive conditions.

However, words ending in -ing may also serve other more complex functions in sentences.

Some of these functions are to create dependent clauses, fragments, and phrases that may act as adjectives, nouns, or adverbs.

The use of “resulting in” in sentences, other than as the main verb, is to introduce outcomes that are syntactically dependent on the rest of the sentence.

This phrase is also an economical and flexible substitute for its lengthier forms that are tense-dependent.

Contextually speaking, this phrase is rather commonly observed in academic, legal, and medical writing, wherein conditions denoting a cause and effect are highly prevalent and crucial.

This simply means that we do not typically use this phrase in colloquial English because other simpler alternatives exist.

In everyday speech, we may ordinarily use “cause,” “create,” or “bring

Now that we’ve tackled the basics, let’s move on to the pre-comma usage.

The guidelines that dictate the comma usage before “resulting in”

Commas signal pauses so the reader can analyze ideas within ideas in sentences, hence the importance in writing.

Another job of commas is to separate ideas that are interesting yet irrelevant with regards to the syntactical structure of a sentence.

Thus, all these additional ideas are to be treated as accessories that enhance the implication of sentences.

They are what we stylistically refer to as parenthetical elements which can be a word, a phrase, a fragment, or a clause within a sentence.

Parenthetical ideas are always set off with commas to highlight and segregate their meaning from the rest of the sentence.

Thus, when “resulting in” is used to introduce an idea that only aims to add a relevant yet grammatically-dispensable meaning to the sentence, a pre-comma is to be inserted.

Let’s have a look at examples of parenthetical ideas introduced by “resulting in” that necessitates a pre-comma placement. 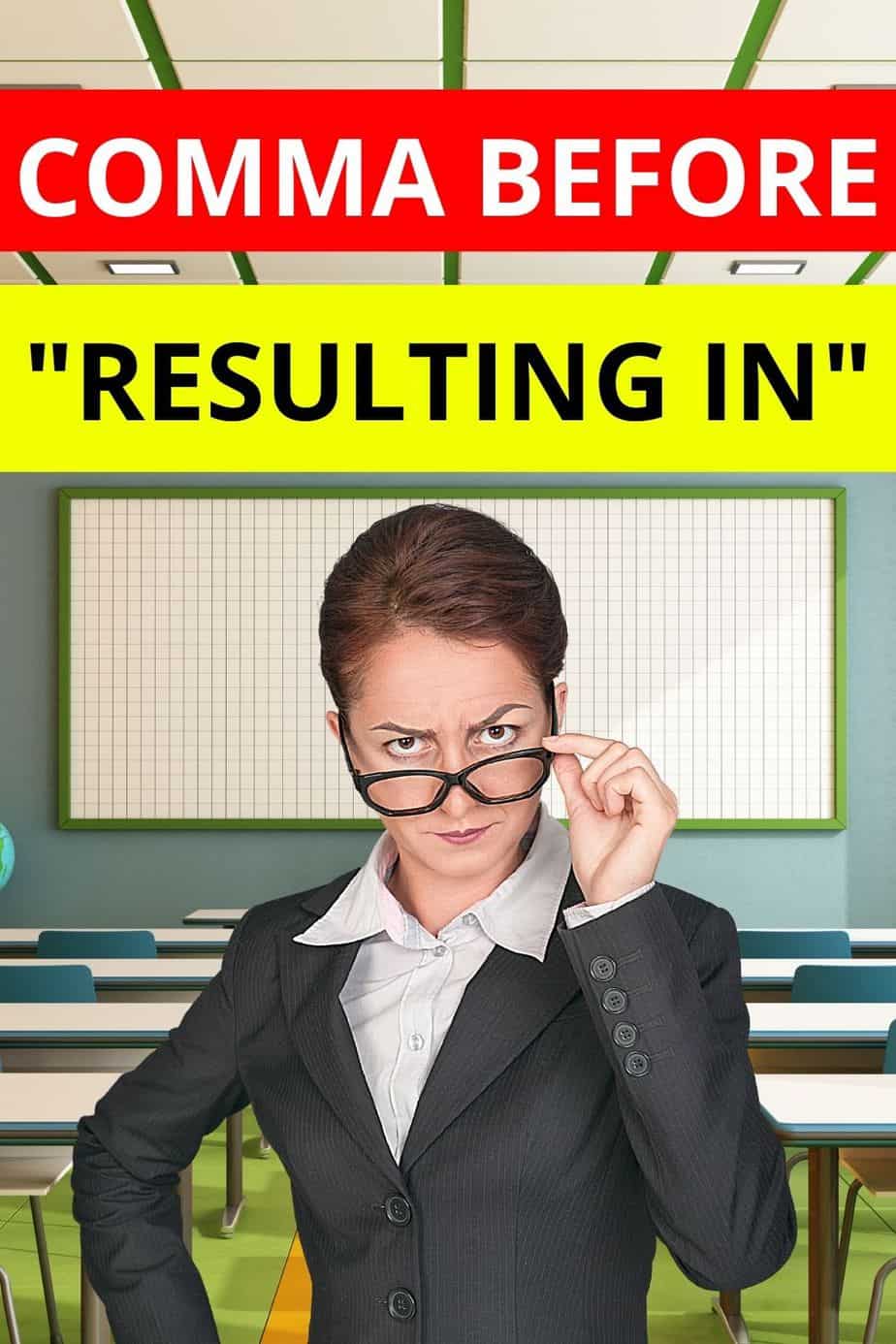 When “resulting in” introduces a sentence-medial parenthesis

A parenthetical element can be inserted anywhere in the sentence simply because it is not grammatically vital.

Although this is the case, it is needless to say that a parenthetical remark at the beginning of the sentence does not essentialize a pre-comma, as we do not start sentences with a comma.

Well, who knows? The rules may or may not change in the future, but this is at least what we generally follow for now in written English.

Digression aside, this means that the next option where a pre-comma applies is when we insert a parenthetical idea introduced by “resulting in” midway.

Look at the example below.

The parenthetical clause functions as a nonrestrictive relative clause similar to “which may result in domestic violence at times,” wherein the relative pronoun is omitted.

When “resulting in” introduces a sentence-final parenthesis

More often than not, “resulting in” is added at the end of a sentence to express a parenthetical statement, as opposed to the medial position.

The same pre-comma rule applies, though, so it’s still not rocket science nor is it astrophysics.

What we have to bear in mind is that the initial clause expresses a complete thought notwithstanding the removal of the phrase or clause.

Please refer to the next example.

The initial clause is a complete sentence per se, which means the succeeding clause is simply additional information expressing the repercussions of the earlier statement.

Apart from marking the parenthetical information, the pre-comma also serves as a segregation device that helps a lengthy sentence become more organized rather than crowded.

When “resulting in” comes after a parenthesis

To recall, parenthetical elements ought to be set off with a comma or commas wherever they appear in the sentence.

This also means that when a parenthesis interrupts a sentence and then the “resulting in” phrase or clause follows afterward, a comma is automatically placed as well.

Child marriages impose socio-economic threats to many nations, which I find disdainful, resulting in the stealth of experiences that are nonetheless crucial for children’s development.

Technically speaking, the “resulting in” clause above is simply another parenthetical information added to improve the meaning of the first independent clause.

Thus, the combination of the three clauses in the example helps in expressing a more complex set of ideas that may not be achieved by using only a single clause.

The guidelines that dictate the unnecessary comma before “resulting in”

Now that the pre-comma guidelines have been laid out, it is also crucial that we understand when not to insert a comma before “resulting in.”

There are two instances that guide this.

We do not need a pre-comma when the phrase introduces a phrase or a clause that acts as an adjective in a sentence.

And, we need not place a comma as well when it functions as a verb in a sentence.

Let’s look at these circumstances in ample detail below.

“Resulting in” may also introduce an idea that serves as an adjective that aims to modify a noun or a noun phrase.

This is a bit tricky because we might think of “resulting” immediately as a verb because of the -ing suffix.

This type of adjective is known as a participial adjective, wherein the function is to provide essential clarifying information toward the noun it modifies.

Here’s an example to illustrate the explanation.

Reckless driving resulting in damage or loss of properties is punishable by law.

The participial adjective above is “resulting in damage” which modifies the noun phrase “reckless driving.”

The adjectival phrase above, also defined as “restrictive” information, is essential to the overall meaning of the whole sentence.

Restrictive information is not separated by commas because it is deemed necessary to the expression of an idea.

This also means that removing the adjective phrase in the last example would make the meaning of the sentence unpredictable and incomplete.

Reckless driving is punishable by law.

Is the sentence still grammatical? Of course, it is!

However, its meaning lacks some sense because legally punishing the act of reckless driving alone is unfair, hence the need for further definition.

You may also learn more about this in our other post that tackles the comma nuances in relative clauses.

In a nutshell, when “resulting in” is used to state an essential participial phrase or a clause that defines a noun, a comma is not needed at all.

When “resulting in” functions as a verb in a continuous tense

The other case that does not necessitate a pre-comma is when “resulting in” is used as the main verb in a sentence.

This, I believe, is much easier than the previous guideline.

When “resulting in” acts as the part of the main verb expressed in any progressive or continuous tense, please do not use a comma.

The flock of people to urbanized areas is resulting in overcrowding and land pollution.

The main verb is also another highly essential element in constructing sentences, and thus, a pre-comma must never be used when “resulting in” functions this way.

What exactly is the meaning of “resulting in”?

The phrase “resulting in” is a rather formal expression used to state a result or a consequence. Most of the time, the usage of the phrase introduces a parenthetical statement attached towards the end of a complex sentence. However, it may also function as the main verb in a sentence inflected in the progressive tense.

Can we start a sentence with “resulting in”?

It is uncommon to start a sentence with “resulting in” because it is rather used midway or at the end of a sentence. When intending to express this phrase’s meaning as an introductory element, we had better use “as a result” instead.

What is an example sentence using a comma before “resulting in?”

Example: “The recent typhoon has wreaked its havoc on coastal villages in the western areas, resulting in loss of lives and damage to infrastructure.” The clause introduced by “resulting in” is a parenthetical idea attached at the end of the sentence to state the result or consequence of the initial independent clause.

Even though comma-related guidelines sound quite intimidating sometimes, commas are simply tools that exist to clarify the meaning of ideas, just like how bolts and screws work.

Especially when our ideas are too complex to be expressed in a single sentence, commas do help a lot in decluttering these layers of information.

As an end note, commas are nonetheless harmless, and they exist because the old way of writing, which didn’t even have spaces at all, needed some reconstruction.