Every time we explore the definition of a new word, we inevitably look into the interplay of language and culture: We learn how culture gives birth to new words, like YOLO, Poggers and oof, but let others fade into oblivion, only to be found in our history books (seriously, when was the last time you heard someone say “groak” or “apricity” in a sentence?).

We also get to see how language shapes culture, how it is used to convey new ideas and, and how it becomes central to empowering entire movements.

However, this interplay goes beyond a culture and its language. It is often the case that not only does a particular language influence another, different language, but that an entire culture also enriches another culture. And, this process of enrichment breeds new words. This is certainly the case with our word today:Fugazi. 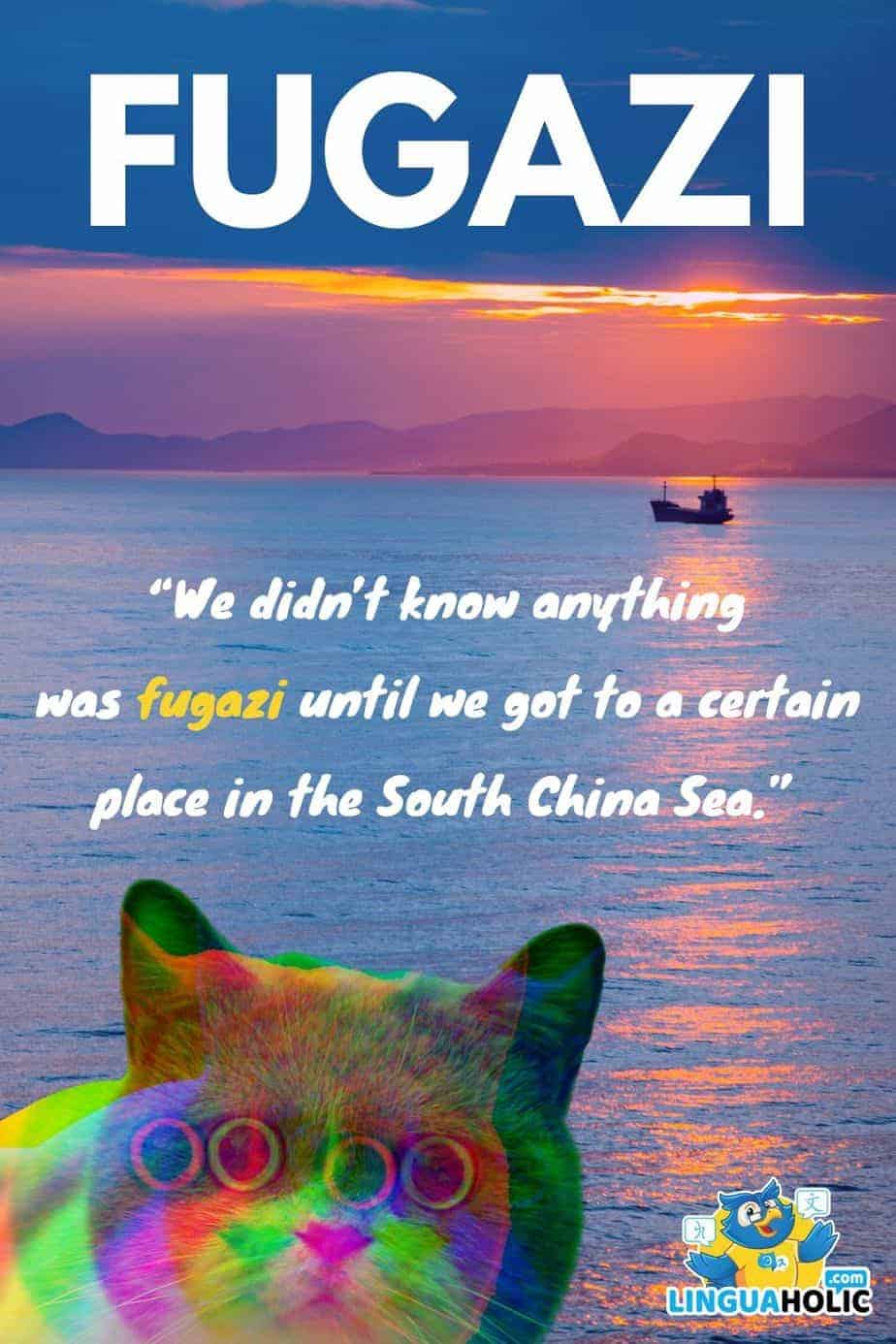 What does Fugazi mean?

The word fugazi has two main meanings. On the one hand, fugazi can mean fake, in which case it is used to refer to something inauthentic. On the other hand, it is used to refer to a messed up situation, one that has deteriorated quickly. Interestingly, this latter meaning was how the word made into both the music scene and pop culture: Fugazi was the name of a music band as well as the name of an album by a different band. Additionally, Fugazi is the name of a popular theater and nightclub in San Francisco, one that has been around for more than a century.

Let’s look at both meanings of Fugazi, followed by how this peculiar word infiltrated pop culture.

The simplest definition of a fugazi is a fake. It can be used to refer to either an object or a person, an individual who pretends to be something he isn’t.

For instance, in the movie Donnie Brasco, a Mafioso named Lefty Ruggiero, played by the ever-talented Al Pacino, approaches a character named “Don da Jeweler.” Ruggiero wants to sell a stolen diamond ring, but the problem is, upon inspection, the ring was declared “a fugazi,” a fake. Obviously, Ruggiero is livid once he learns this piece of information and decides to go back to the individual who sold him the ring, and the film picks up from there, following Ruggiero’s character along with another character named “Donnie Brasco,” played by Johnny Depp.

Speaking of Donnie Brasco, the book “Donnie Brasco: My Undercover Life in the Mafia”, the book upon which the aforementioned film was based on, was one of the first times the term appeared in print. However, “fugazi” was written differently: Rather than ending with an “I”, it ended with a “Y,” giving us “fugazy.” In the book, the word “fugazy” was used five times and referred to counterfeit jewelry.

As mentioned, the term can also be used to talk about people. For instance, it can be used as follows:

Mark: What do you think about Jocelyn?
Jordan: Forget Jocelyn, man. She’s nothing but a fugazi.

Aside from fake, fugazi can mean doesn’t exist. This is best exemplified by Martin Scorsese’s film “The Wolf of Wall Street,” in which two characters, played by Leonardo DiCaprio and Mathew McConaughey, are having a conversation.

This is a snippet of the conversation:

Mark Hanna: You know what a Fugazzi is?
Jordan Belfort: Fugazi… yeah, it’s a fake…
Mark Hanna: Faguzzi, fugazzi, it’s a whazzie, it’s a whoozie… it’s a.. fairy dust. It doesn’t exist. It’s never landed. It’s no matter, it’s not on the elemental chart. It… it’s not f***ing real!

Today, fugazi, with its definition of being fake, has become part of our pop culture, appearing in numerous TV shows, such as “The Real Housewives of New Jersey” and “Jersey Shore.”

It has also been used in several rap songs: Jay-Z used it in “Imaginary Player,” where he labeled “fake” objects and people as fugazis. In fact, the exact line goes something like this: “You crazy, you fugazi, I’m loco with dough papo.”

The origin of the word

Another possible origin is a New York limousine service, the type a person trying to display wealth without really having it would hire. The service was called Fugazy Continental, after Bob Fugazy, its owner and the man who promised the public “high class for a low price.” For one thing, the company had really cheesy commercials.

There are many unique interesting acronyms floating around. For instance, did you know what Fubar stands for? Well, fret no more. It means “F***ed Up Beyond All Recognition.” As uncouth as that may be, Fugazi is really quite similar.

Instead, they argue that fugazi originated as an amalgamation of the name flame fougasse, which was a type of improvised explosive, one that was used during the war. In either case, the meaning of messed up comes to us from the Nam era.

(A backronym is sort of the opposite of an acronym. Whereas an acronym is a word that is formed by taking the first letters from words in a phrase, a backronym is a phrase of words that are made up specifically to suit the letters in a certain word.)

In fact, when Mark Baker presented the world with his book Nam, an oral history of the Vietnam War taken from veterans who were there, he recounted several stories, one of which contained the following line:

“We didn’t know anything was fugazi until we got to a certain place in the South China Sea.”

In that line, the word fugazi has an asterisk above it, and if you look the word up in the book’s glossary, you will find the following definition: f***ed up or scr***d up.

We’ve already seen how fugazi, with its allusion to fakeness, made its way into the songs we here, the films we see, and the TV we watch. However, the meaning of being messed up also caught on and had a significant impact on our culture.

In 1987, Fugazi, a punk rock band, formed in Washington, D.C. The band consisted of Ian Mackaye and Guy Picciotto, both of whom were guitarists and vocalists; Joe Lally, the bassist; and Brendan Canty, the band’s drummer.

The band was famous for having a distinctive sound, one that was a mixture of dub/ reggae with punk/hardcore guitars. The band also shunned the corporate music industry, opting for a Do-It-Yourself ethic, one where they promoted themselves, pressed their own labels, and booked their own live tours.

Nevertheless, they were very successful, performing several tours worldwide and producing six studio albums, a movie, and a live series.

Now, the million-dollar question is why did the band call themselves Fugazi?

Well, the story goes as follows: The band’s frontman, Ian Mackaye, got the name from the book Nam, the one we just talked about.

In fact, Mackaye’s exact words were:

“I was reading a book called Nam…. A number of stories in there were kind of woven into Apocalypse Now… It is of course filled with a lot of jargon and slang, and at some point the word fugazi… and I thought, “what is that?” And I went back to the glossary at the back of the book, and it just said “a f***ed-up situation.” And, I thought, that was a great term!”

The band enjoyed decades of success. They released their last album in 2001 and called it “The Argument.” The album was a critical success, and the band went on tour for the following year.

Once they were done with their 2002 UK tour, the band announced that they were going on an indefinite hiatus because the band members wanted to devote more time to their families as well as other professional projects.

Ever since the hiatus that started in 2003, there have been rumors about a possible reunion, but even though the band was offered lucrative deals to get back together, they have declined these offers. They insist that if they reunite, it won’t be for the money; it will be for the music.

In 1984, Marillion, a British neo-progressive rock band, published their second album and called it Fugazi. The album was produced by Nick Tauber, the British producer who worked with Thin Lizzy and Toyah.

Fugazi was a bit of a shift for Marillion; the band was known for leaning towards progressive rock, but the new album was more hard rock.

That said, Fugazi was a large success, making it to the UK Top 5 and going Gold, largely thanks to the earlier success of the band’s first album, “Script for a Jester’s Tear.” One of the tracks on the album was also called “Fugazi,” and the track was one of the more critically acclaimed songs along with “Assassing” and “Incubus.”

Again, the album got its name from the Nam definition of fugazi. If anything, the titular song that carries the same name as the album contains the following lines:

In the end, “Fugazi,” the album, wasn’t as successful or as loved as the first album, “Script for a Jester’s Tear,” or the third album, “Misplaced Childhood.”

Fugazi, the club and theater

If you go to North Beach, San Francisco, California, you will find a small theater and nightclub called “Club Fugazi.” The club/theater is located on the ground floor of a building called the “Casa Coloniale Italiana John F. Fugazi,” which is a community center for the Italian population of San Francisco.

Now, the building gets its name because it was financed through a donation by John F. Fugazi, the man who established the Columbus Savings and Loan Society back in 1893 along with the Banca Popolare Operaia Italiana in 1906. Eventually, both these banks merged into what we know today as the Bank of America, but it was known as the Bank of Italy back then.

Club Fugazi itself has been hosting the same show for over forty years: “Beach Blanket Babylon,” a show where actors wear ridiculous wigs or hats, dress-up in funny costumes, and sing popular folk songs.

They also parody countless famous people, including presidents, kings, well-known politicians, actors, singers, businessmen, and financial tycoons. Sadly, recent news indicates that the show might be coming to a close this year.

Is any of this real?

Fugazi is one of those words that are shrouded in mystery; people know what it means, but no one is certain where it comes from. Even the definition of messed up isn’t a solid thing as several veterans during the Nam era have reported being totally unfamiliar with the word.

As for the definition of fake, several people associated with the mob have admitted to not knowing what the word meant.

And, this is what is so confusing here: For every book or account you get that includes the word, other people find it completely foreign to them.

For every Mark Baker, the author of “Nam,” who uses the word when talking about the harrowing experiences the veterans went through, other vets will deny ever hearing it.

For every Joe Pistone, the author of “Donnie Brasco: My Undercover Life in the Mafia,” who uses the word when talking about the mob’s lingo, other mafiosos will gawk at the word and find it incomprehensible.

So, the real question is this:

Given how fugazi the situation is, is the word fugazi just a fugazi?