English Grammar can be a tricky subject, tripping up even the best of us. It requires plenty of study and understanding.

But, once you get the hang of things, your words start flowing much more naturally, and you start making fewer and fewer mistakes.

One expression that can easily confound beginners to English is “in contrast to.” On the one hand, some people might not be sure what it means or how to use it in a sentence.

On the other hand, even if you know what it means, you still have to figure out how to punctuate it and what exact role it performs from a grammatical standpoint.

With this in mind, let’s take a closer look at “in contrast to.”

What does “in contrast to” mean?

When you use “in contrast to,” you are trying to highlight that one thing is very different from something else. It serves as a connector of contrast and leads back to causative conjunctions. (If this sounds confusing, it will be explained soon enough.) Interestingly, “in contrast to” can show up in different parts of a sentence, yet its function is usually the same throughout. The only exception to this is when “in contrast to” acts as an object of a verb.

This breakdown is important because we will later look at what happens when “contrast” acts as a verb.

“In contrast to” is always followed by a noun.

Here are a few examples to get the ball rolling.

In contrast to his brother, he isn’t gifted athletically.

The sentence here makes two assertions. On the one hand, it tells us that the main subject isn’t athletically gifted. On the other hand, it also informs us that his brother is gifted athletically.

The book, in contrast to the movie, was quite engrossing.

Here, “in contrast to the movie” is an interjectory statement that adds unnecessary information to the sentence.

There are several types of conjunctions.

You also have conjunctive adverbs, such as “however,” “finally,” and “in contrast to.”

Now, conjunctive adverbs help show us the relation between two clauses. The relationship could be one of conclusion, in which case you probably want to use words like “to conclude,” “briefly,” and “as a result.”

If the relationship is that of addition, you will end up using words like “Additionally,” “over and above,” and “What’s more.”

Alternatively, if you want to highlight a relation of cause and effect, then you need to use adverbs like “consequently,” “accordingly,” and “hence.”

Fourth on the list is a relation of opinion, where you will use words like “to my mind,” in my opinion,” and “as I see it.” Finally, there are connectors of contrast, and these include “nevertheless,” “despite,” and “in contrast to.”

Here are five examples highlighting each type of conjunctive adverb.

To conclude, the study shows that the medication is 95 percent effective.
Additionally, the test subjects reported no side effects.
Accordingly, we recommend moving on to phase two of testing.
To our mind, this drug has the potential to save millions of lives.
Nevertheless, as with all scientific endeavors, caution must be followed every step of the way.

Before moving on, it is worth highlighting that the conjunctive adverbs mentioned above, come in one of two flavors.

So, to sum up everything said so far, “in contrast to” is a prepositional phrase that behaves as a conjunctive adverb highlighting a relation of contrast. 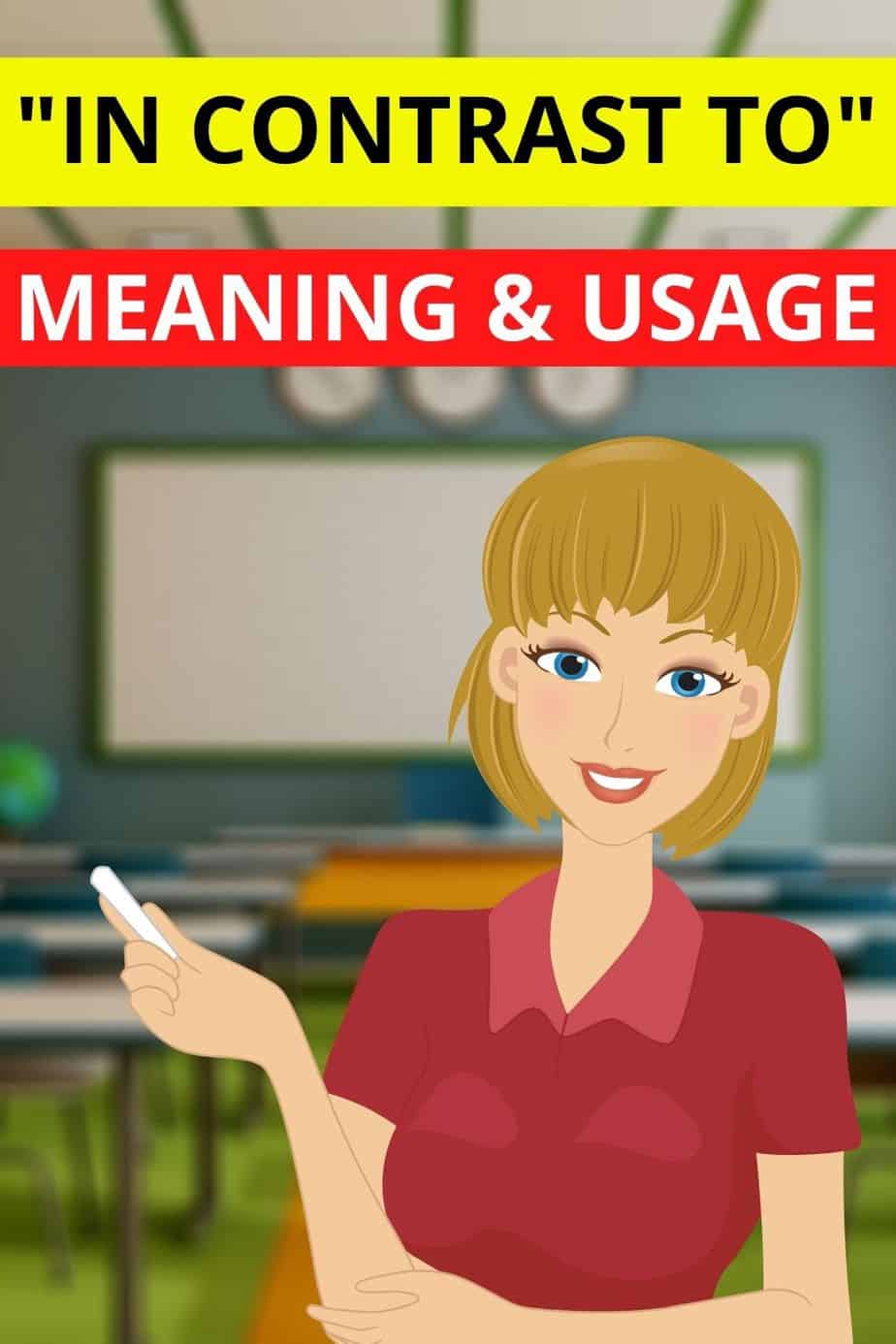 How do you punctuate conjunctive adverbs?

Now, a conjunctive adverb can come in different positions.

It can introduce a sentence.

It can come in the middle or the end of a sentence.

It can tie two main clauses together using a semicolon.

When conjunctive adverbs come at the beginning of a sentence, they are always followed by a comma.

However, her uncertainty cost her.
In contrast to what they were supposed to do, they left the room unsealed anyway.

Conjunctive adverbs in the middle or the end of a sentence

When a conjunctive adverb comes in the middle of a sentence, it is usually surrounded by a comma on either side because it plays an interjectional role.

Sarah, however, knew that she had won.
The man, in contrast to his wife, felt no sympathy for the plaintiff.

And, if the conjunctive adverb comes at the end of a sentence, it is preceded by a comma and followed by a full stop.

The man felt no sympathy for the plaintiff, in contrast to his wife.

In this case, the conjunctive adverb is preceded by a semicolon and followed by a comma.

Mark felt sure that he would get the job; however, his friends weren’t as certain.
The book was a very difficult read; in contrast to this, the movie was a delight to watch.

It is worth noting when using “in contrast to” to tie two clauses together, the noun at the end should refer to the first clause.

So, in our example, we used the word “this.” Another possibility was as follows.

The book was a very difficult read; in contrast to the difficulty of the book, the movie was a delight to watch.

”In contrast to” as an object

Aside from functioning as a conjunctive adverb, “in contrast to” can also be the object of a verb, in which case it takes no punctuation whatsoever.

As you can see, since “in contrast to” is a direct object in both of the above examples, it requires no special punctuation around it.

That said, there are a few things worth pointing out.

As a matter of fact, according to the Corpus of Contemporary American English, “in contrast to” is more than ten times more popular than “in contrast with.”

Similarly, the Google Ngram Viewer tells us the same fact, that “in contrast to” is far more widely used than “in contrast with.”

Nevertheless, it is also worth noting that the Google Ngram viewer also tells us that there was a point in time, around the nineteenth century, when things were the other way around and “in contrast with” was more popular than “in contrast to.”

The other thing that I would like to highlight is that there is an alternative usage of “contrast with,” one that sees “contrast” being used as a verb rather than a noun.

The sunny weather yesterday contrasted starkly with the rainy weather from the day before.

In this particular case, you can substitute “contrast with” with “contrast to.”