The world is a battlefield and language is the weapon that we use every single day to fight an invisible war.

Knowing the right words to use and applying them in the proper context facilitate the success of any written or spoken language.

Some of the hardest words to use and explain are those that express grammatical relationships, as opposed to content, like transition phrases.

So, we’ve dissected one in utmost detail just for you.

What is the meaning of “in contrast?”

The transition phrase “in contrast” is tantamount to “different from” which is used to express dissimilarity of entities or ideas This means that when one thing is “in contrast” to another, then logic suggests that there is no way for these two to share the same characteristics. For example, the rich people’s lifestyle is in contrast to the poor’s. The use of these kinds of transition phrases allows the representation of comparative and contrastive ideas in a more sophisticated manner. Thus, this kind of phrase is mainly applicable in the formal context, as opposed to casual discourses.

Transition phrases help in managing and maintaining the logical flow of ideas both in writing and speaking.

When putting thoughts into words, countering our own arguments is essential in increasing the validity of the idea being conveyed.

This can be achieved by using adversative transitions that dismiss or contradict the premise or the initial claim.

“In contrast” is an adversative transition phrase that helps in representing counterarguments, which has a very similar purpose with “but” and “however.”

Being able to effectively use transition words and phrases exhibits having higher-order thinking skills, as they are more complicated than content words such as nouns and verbs.

Therefore, the ability to use function words like “in contrast” exemplifies higher linguistic competence than those who are less comfortable using them.

The usage of “in contrast” in utmost detail

Adversative transitions are linguistic devices that express the opposition, objection, or juxtaposition of ideas.

“In contrast” can be used together with other lexical elements, especially prepositions, which are also function words.

Both native and non-native users of the English language share similar struggles in learning and applying transitional elements.

Hence, the difficulty in using transitional elements is mainly caused by the combination of grammatical abstractions, which is natural, apparently enough.

When we compare and contrast ideas in English, this means that at least two separate entities are automatically involved in the argument.

One of these two refutes or rebuts the other to clearly represent the intended thought, such as in negative and affirmative expressions. 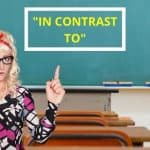 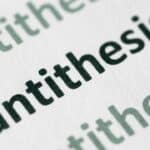 Antithesis as a Figure of Speech: Meaning, Usage & Examples 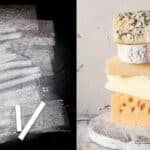 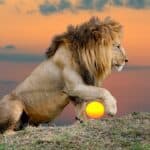 In other words, you can simply think of the idea behind antonyms to make sense of the phrase “in contrast.”

Here are the most widely-used variations of this transition phrase.

The distinction between the use of “to” versus “with” often confuses English language users.

This is because a very fine line distinguishes the meaning of these two prepositions.

Technically, these two are often interchangeable in the sense that using either “to” or “with” doesn’t necessarily prompt misinterpretation to the audience.

Here’s how to use these two phrases.

Preferable: In contrast to the traditional perspective, the new norm suggests that physical punishments do more harm than good.

Acceptable: In contrast with the traditional perspective, the new norm suggests that physical punishments do more harm than good.

Again, I’d like to stress that the second variation is not incorrect, but it is just less likely used by most people these days.

So, it would be wiser to lean more towards using “in contrast to” both in writing and speaking.

By contrast vs. In contrast

“By contrast” is another common variation of “in contrast” that does not require a noun phrase or clause afterward.

It can be used as a stand-alone introductory phrase or it can parenthetically interrupt a sentence midway.

The same meaning is implied by “by contrast” which is to express the contradicting aspects of ideas.

However, the transition phrase “in contrast to” is more widely-recognized and used compared to “by contrast.”

Here’s how to use “by contrast” in a sentence.

New York City is the most densely populated area in the USA. By contrast, the city of Lost Springs in Wyoming is inhabited by only four residents.

To stand in contrast to

Another closely-related expression is “to stand in contrast to” wherein “stand” is not used in its basic, literal meaning.

It rather means “to be in a certain position or situation,” and therefore, the entire expression implies an idiomatic connotation.

We can “stand in contrast” to note that something is strikingly out of the ordinary, such as in beliefs, traditions, or practices.

Here’s how to use this expression.

Her views and opinions often stand in contrast to the norms.

The sentence above implies that the subject frequently displays judgments and claims that are more radical or extreme compared to the general public.

The sentence does not essentially imply that the subject’s opinions are either good or bad, but that they are simply distinct from what the norms suggest.

Now that we have looked into the variations, let’s also take a peek at alternative transitional expressions that we can use instead of “in contrast.”

Other expressions for comparing and contrasting

In this section, you will learn different ways to express contrastive ideas using other expressions.

Learning alternative ways to structure our sentences is important in avoiding redundant and monotonous thought conveyance.

As the phrase suggests per se, “in comparison” is used to compare strings of non-parallel ideas.

Similar to “in contrast,” this expression is also collocated with the prepositions “by,” “with,” and “to.”

While the use of “in contrast” only started surging at the beginning of the 1900s, “in comparison” has been more stable over time.

Here’s how to use “in comparison” in a sentence.

In comparison to her twin brother, she is more musically intelligent and physically active.

You may also restructure the sentence as follows.

She is more musically intelligent and physically active in comparison to her twin brother.

On the one hand…on the other

Representing lengthier arguments can also be done by using a pair of adversative transitional expressions.

This is commonly done by using “on the one hand” for the premise and “on the other” on the subsequent argument.

Also, bear in mind that while “on the other hand” may be used independently, “on the one hand” cannot be solely used without the former’s assistance.

Here’s how to use the pair.

On the one hand, mendicancy is an economic issue. On the other, it is also a socio-moral dilemma.

And, here’s how to use “on the other hand” alone.

She loves the idea of living in the country. On the other hand, she is also hesitant to leave some aspects of the urban way of life.

“On the contrary” is also an effective transition phrase when explaining contrastive arguments.

Interestingly enough, the usage of “on the contrary” has declined in the last two centuries, whereas “in contrast” has risen instead.

At present, the usage of “on the contrary” is slightly inferior to “in contrast.”

Here’s how to use it in a sentence.

Jerry is simple-minded but sincere. On the contrary, his brother is deep but deceptive.

Lastly, we may also use “conversely” in introducing the opposing idea, which can also be positioned either at the beginning or in the middle of the sentence.

“In contrast” is more popular than “conversely” which is maybe due to the rather ambiguous nature of the latter’s verb form.

Here’s how to use “conversely” in a sentence.

Fraternal twins are easy to differentiate based on physical attributes. Conversely, identical twins are hard to distinguish, except for those people who know them well.

The formality level of “in contrast”

With regards to the formality level of “in contrast,” it can be considered as a formal rather than a casual expression.

Although the meaning of “in contrast” is generally easy to understand, it is more likely used in formalistic discourses such as in academic writing and business correspondence.

In casual conversations, though, we may simply use “but” instead of “in contrast” when we want to express counterarguments.

This is because using more sophisticated words in informal conversations would generally account for a linguistic phenomenon called a “register clash.”

Tactlessly or innocently doing so may invite misconceptions, for example, sounding highfalutin or pretentious, which is not advisable.

So, it is much better to save your “in-contrasts” and “converselies” for business presentations and research papers.

Frequently Asked Questions on “In Contrast”

How can we use “in contrast” in a sentence?

We can use it in conveying at least two distinct arguments wherein one dismisses the validity of the other as in “He has been born with a silver spoon in his mouth; in contrast, she has been raised like a church mouse.”

What is a synonym for “in contrast?”

The following are synonymous transitional phrases: on the other hand, on the contrary, conversely, and in comparison.

What kind of transition phrase is “in contrast?”

“In contrast” is an adversative transition phrase, which mainly serves its purpose by presenting contradiction or juxtaposition of at least two distinct ideas.

Transition phrases like “in contrast” are vital in the expression of more advanced strings of arguments.

As this is the case, being able to effectively use “in contrast” in the appropriate context suggests having higher linguistic competence.

Thus, it is not enough to only know how to use it, but it is also equally crucial to know when to use it in the world of written and spoken languages.