Knowing where commas go in our sentences needs a bit of legwork. Just like every other skill that we try to learn.

Being able to mix the appropriate transition devices with proper punctuation enriches writing to a whole new level as well.

Thanks for dropping by! Let’s now take a little journey towards understanding these writing hacks. Hope you’ll bear with me ‘til the end.

Is a comma always necessary after “for example?”

A comma after “for example” is generally necessary no matter where it appears in the sentence. In particular, you need to place a post-comma when it serves as the introductory phrase of a sentence, when you’re parenthetically using it midway, and when it comes after a semicolon. But, the comma may be conveniently removed when using one makes your sentence hard to read, especially in informal texts. Lastly, placing a comma after “for example” only becomes incorrect when you’re using the phrase as a noun in the sentence.

Making sense of the phrase “for example”

“For example” is a utilitarian phrase that exemplifies how human beings make languages more convenient to use.

This is because we typically include or use sample elements in texts to ease the burden of reading and clarify what we mean.

If we take this to a medical perspective, examples, therefore, work like anesthetic agents that help in sensationless surgical procedures.

In other words, examples are written devices that make our murky ideas more vivid and much easier to digest for readers.

After all, writing aims to share information for the benefit of both the present and future civilizations.

The meaning of “for example”

“For example” is a phrase that we inherited from the Roman empire which unfortunately collapsed a millennium and a half ago.

It came from “exempli gratia,” which can be abbreviated as “e.g.,” a Latin phrase that literally translates into “for the sake of (an) example” in English.

Since humans have the ability and freedom to make things more convenient, we use the truncated version “for example” instead, both in spoken and written English.

The usage of ”for example”

Its abbreviated form “e.g.” is often confused with “i.e.” which stands for id est, “that is” when faithfully translated, another Latin phrase that serves a relevant purpose.

However, “for example” is different from “that is” in such a way that it introduces an element or series of elements belonging to a previously-mentioned category.

Some people have occupationally tainted jobs, for example, pawnbrokers, termite exterminators, and undertakers.

The elements listed after “for example” are simply representatives of all the kinds of the category “occupationally tainted jobs.”

Apparently, we don’t have to list all kinds of elements belonging to a particular category because that would defeat the purpose of the phrase being discussed.

Roughly speaking, while we can use “i.e.” to specify and clarify complex ideas, “e.g.” can be used to present types or kinds of elements under them.

Some people have occupationally tainted jobs, that is, any work that can be defined as morally, physically, or socially wrong.

Thus, both mainly serve a particularizing role in heavy-laden sentences, which are common in the formal writing context.

Placing a necessary comma after “for example”

Now that we have covered the one-oh-ones, let’s move on to punctuation.

The default process to take when deciding on post-comma usage is to simply consider the readability, the context, and the purpose of the text.

A comma is almost always necessary after “for example”, especially in legal and academic texts.

But, the comma can be conveniently dropped when putting one makes the sentence harder to read. 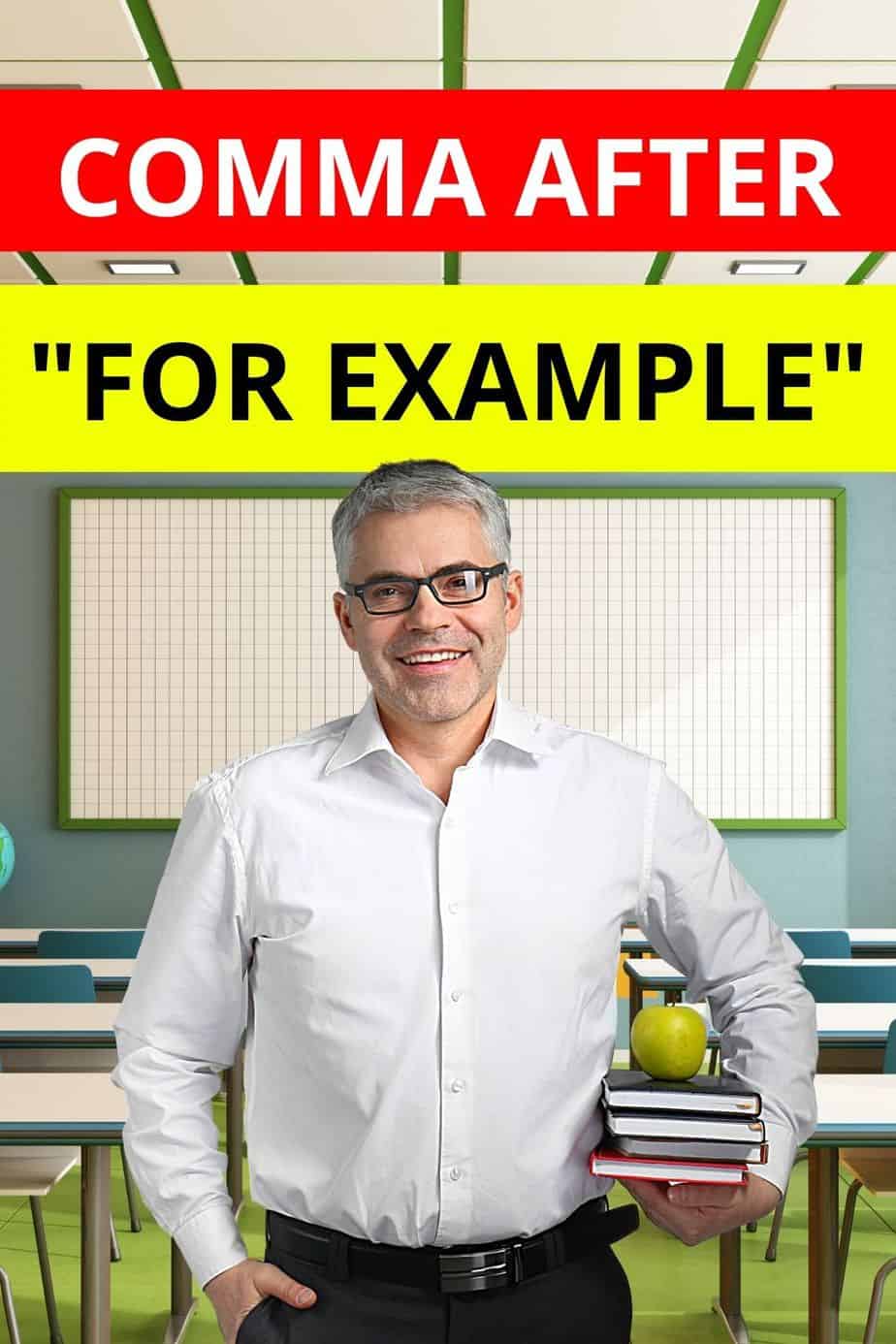 When “for example” is used at the beginning of a sentence

“For example” is frequently used at the beginning of the sentence when the writer wants to disambiguate a complex sentence.

This can be done by introducing the category in one full sentence and then separating the example elements into another sentence afterward.

Constructing the ideas this way enables the background context to be fully analyzed by the reader first, most especially when the concept is technical.

This should prompt the easier transition and interpretation of ideas.

People in the healthcare industry are prone to experiencing compassion fatigue. For example, nurses, doctors, counselors, or any person who is repeatedly exposed to traumatic events may show signs of it after some time.

When “for example” is used as a mid-sentence parenthesis

Examples may also be placed mid-sentence to provide clarity of the intended idea that might be quite vague.

Similarly, this provides more intelligibility for an idea that may not be achieved when separated into two parts.

This type of construction is commonly observed in academic and legal texts wherein specific examples are often necessary for logical reasons.

Some signs of compassion fatigue may seem too normal to attract any attention, for example, irritability, sleeplessness, and emotional numbness, which then slowly rips the person apart through time.

When “for example” is used after a semicolon

As you may have observed, the last example was clunky and hard to read but very commonly found in formal documents.

Another option that we can take is to use a semicolon before introducing the examples to signal a longer pause to the reader.

A comma should also come after “for example” in this type of construction.

However, other people may also suffer from compassion fatigue; for example, single moms, teachers, and anyone whose job is to care for others more than themselves.

The examples in this section are the most common ways to use a comma after “for example.”

Nevertheless, comma rules are not set in stone, so they can be bent when necessity arises.

Here are some exceptions to the grammatical conventions in English.

Placing an optional comma after “for example”

The basic idea of the optional post-comma placement goes back to the earlier argument presented in this post, and that is readability.

You can either insert or omit the comma in the following situations.

When “for example” is used within parenthetical marks

Reducing the amount of obscurity can also be done by encapsulating the examples in parenthetical marks.

You can either write the full phrase or use the abbreviated form “e.g.” when this happens, but the latter is more common when adhering to standardized writing styles like the APA format.

And, the post-comma may simply be dropped since the presence of parenthetical marks already facilitates the disambiguation of the entire sentence.

When the post-comma makes the sentence hard to read

Another common reason why we may get rid of the comma is when the writer thinks that putting one reduces readability.

Apparently, this is rather a stylistic rather than a syntactical choice to make, as putting too many commas may also impede reading.

So, when confusion hits, placing an after-comma should be the default decision to make.

Do not place after “for example” when…

The last, and the easiest, guideline I’d like to share is the incorrect way to put a comma after “for example.”

This is only going to happen when the phrase is deliberately used as a noun in the sentence.

Of course, we can reduce the amount of ambiguity by italicizing, bolding, or putting quotation marks around the phrase.

But in case these ways are not in the options, you may just leave it as it is, and the sentence’s interpretation will simply be context-dependent instead.

When using “for example” as a noun

For example functions similarly to such as, like, and for instance.

Frequently Asked Questions on Comma After “For Example”

When do we need a comma before “that is?”

A comma is necessary before “that is” when it means “id est,” a Latin-derived transition phrase used to specify an earlier argument in sentences as in “The shop is offering huge discounts on all food items starting next week, that is, 75% off after 9:00 pm on weekdays.”

What is the difference between “for example” and “that is?”

Although both transition phrases contain a particularizing function, “for example” aims to include some representative elements of a category, whereas “that is” is used to specify an earlier argument or proposition.

Transition words and commas can be a pain in the neck, but the only way to get over this concern is to keep practicing and reading.

No matter how perplexing writing may seem, always bear in mind that the most important considerations to make are readability, context, and purpose.