Sometimes, a phrase may look simple and have one meaning that is straightforward, but there might also be a cultural association behind it that gives it an additional weight and meaning.

You probably already know that a “test” is an examination of what you know about a given topic.

However, it is also used when testing an emergency response. This affects how it is used and understood in some situations, including in its negative form.

What does “this is a test” mean?

“This is a test” can mean that your knowledge about a subject is about to be checked with an examination that might be either written or oral. It can also mean that emergency procedures are being checked and that even though the situation appears real and might include setting off alarms or sending reminders, it is only being done for practice.

“This is a test” is a phrase that is so commonly known as part of testing emergency procedures that variations on it are often used in subtle ways for various types of emphasis.

Where does the expression “this is a test” come from?

This phrase, or something similar, is used to check emergency alert systems in the United States.

A few decades ago, the plan was to send out emergency information about anything from weather conditions to civil unrest using the TV.

From time to time, TV stations would run tests to make sure the system was working.

A high-pitched sound would come from the TV, and a voice-over would say something like “This is a test of the emergency broadcasting system. This is only a test.”

These emergency alerts are still occasionally run on TV and radio, but today, emergency messages are more likely to be sent by text to mobile devices, such as cell phones.

“This is a test. This is only a test,” or some variation of these two sentences, is sometimes said to indicate in a friendly and casual way that a situation is not very serious.

For example, if you were in an employee training and the trainer was checking your knowledge of what you had just learned, they might say this to help you relax and understand that it was okay if you got something wrong.

”This is not a test” 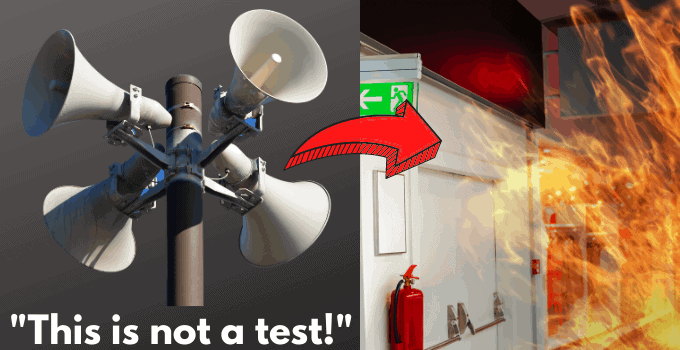 In its negative form, “this is not a test” can be used for emphasis. It can indicate that a situation is very serious.

For example, you might hear an announcement that says, “Everyone needs to leave the building right now! This is not a test!”

All you really need to know is that when you hear this phrase in this context, you should probably follow the instructions!

The phrase “this is not a drill” is sometimes used similarly.

A “drill” is a kind of practice, like a fire drill used for people to practice evacuation routes from a building in case of a real fire.

“This is not a test/drill” might also be used to get you to pay more attention to a piece of information.

Check out our low low prices today! This is not a drill!

”This is a test,” pop culture and context

One somewhat confusing thing about the phrase “this is a test” is that depending on context, these are words that can either make people feel more worried or more relieved.

If you walk into a classroom and sit down and the teacher starts passing out papers, telling you, “This is a test,” you might panic because you do not know the material as well as you should.

If you hear an emergency alarm going off or get a text message alerting you of danger but are told, “This is a test,” you might feel relieved because you know that nothing is truly wrong.

“This is a test” in its association with emergencies is common enough that you may see it in many pop culture contexts.

For example, the Dutch DJ Armin van Buuren has used it as a track title for a piece that includes lyrics about having technical difficulties.

As a title of a play or a piece of fiction, it could also be used ironically, indicating that something much worse than a test is happening.