We’re diving into the depths of nerd controversy here. What I’ll be covering isn’t an exact science and there are shades of meaning around the edges.

For the casual reader, this will be an excellent primer.

But if you’re one of the two types of people I’ll be discussing today, you might just have a different opinion.

And if you have a strong opinion, but don’t think you’re either—well, I gotta break it to ya, bud…

Let’s start from the basics and build out from there.

What is the difference between weeaboo and otaku?

In the eternal debate over what’s a weeaboo vs an otaku you first need to know that weeaboo is a made up word from the English-speaking part of the internet, while otaku is an actual Japanese word. The basic difference is that a weeaboo is unhealthily obsessive about Japan in particular, often making unaccounted for apologetics for anything Japanese and showing general obsession for the country and culture, especially its pop media, often without understanding or respect. An otaku in the English-speaking world is simply a Japan media nerd, and in the Japanese-speaking world, it’s any sort of nerd.

It’s more nuanced than that, though, so let’s dive in.

What the Heck’s a Weeaboo?

The short answer is that a weeaboo is a Japanophile who has taken their liking of Japan to obsessive, perhaps unhealthy levels. Let’s jump back in time to see if we can uncover some more details.

It seems that weeaboo has its origins in an old internet word from the early 2000s, “Wapanese.”

The earliest recorded use of Wapanese can be traced back to the summer of 2002, tucked away in the “Racial Slur Database.”

Wapanese, according to them, is “a slur used to describe a white person who is obsessed with japanese [sic] culture. This would include manga/hentai/and anime.”

A little over a year later, the word found itself being increasingly used on the internet posting forum 4chan, resulting in many online altercations, particularly between those from the anime and manga subculture and those who preferred to mock it.

By mid-2005 the situation had gotten out of hand and the moderators of 4chan turned to a humorous solution.

They decided to implement a word filter which automatically changed every use of the word “Wapanese” into “weeaboo” when posted.

I know, I know—that still doesn’t tell you where the word “weeaboo” actually came from.

Well, for that we turn to a classic web comic by the name of Perry Bible Fellowship.

Created by Nicholas Gurewitch in the early aughts, he produced a short, almost nonsensical strip that featured the word “Weeaboo” being used in some sort of fraternity-like, punishment ritual.

A person in the first comic panel says the word, another person calls him out on it, and in the final panel the first man is about to be paddled while a crowd of colleagues cheer, “WEE-A-BOO!”

The word is a conglomeration of phonemes that sound kinda funny and have no meaning on their own. Originally, the word weeaboo meant nothing at all. It was utter nonsense, and meant to be so.

But then the 4chan admins stepped in and changed history forever.

With the automatic replacement of Wapanese with the sillier weeaboo, the users gradually moved on to simply using the new word in place of the old all by themselves.

How to Use the Word Weeaboo

One important to thing to make clear if it wasn’t previously is that “weeaboo” as a word has no connection to the Japanese language.

In fact, if you use the word in conversation with a Japanese person (who isn’t deeply involved in English-language meme culture), they won’t have the first clue what you’re talking about.

It’s also useful to know that a shorter form of the word that is commonly used is “weeb.”

Now, what sort of person do you use the word with?

A weeaboo carries the tinge of “cultural appropriation.” That is to say, they obsess over their love of all things Japanese without real, sincere understanding or discernment. They fetishize Japan and all its culture attachments. Their behavior is often embarrassing, disrespectful, and off-putting.

“Oh my kami, don’t be such a baka—of course all Japanese people love Pocky, desu!”

Weeaboo-ness extends beyond Japanese culture. The word has been adapted to cover a range of obsessive types.

If you want to talk about the inverse of a weeaboo—that is, a Japanese person obsessed with all things American—you can call them a “freeaboo.” The Korean version is “koreaboo,” for all your K-pop obsessed friends.

The Chinese version is “chinaboo.” I think you get the picture.

Otaku is a real Japanese word that has slightly different usages in Japan versus how it’s been used now that the term has spread widely overseas. In the dictionary we find:

“ ‘Otaku’ was coined in the 1970s and generally is used to refer to fans of pop culture.”

That’s a pretty broad definition, so I decided to dig deeper.

The word originally comes from the Japanese word for “another person’s home or family,” and can be used as an honorific (like san, sama, kun, chan, etc).

In the 70s, some animators would use the term in-house as an honorific. That usage saw wider use after an episode of Macross in 1982 where a character used it as an honorific as well.

It was in 1983 that the word really hit the primetime with an essay written by Nakamori Akio. In this essay, the term was explicitly chosen to refer to the sort of seriously nerdy people who attend manga and anime conventions.

In fact, Nakamori used the Japanese word for “bizzare” to define otaku.

So, while the word carried a somewhat negative connotation, it was contained within the fandom’s subculture.

But then 1988 happened and things got bad for otaku. For two years at the end of the 80s, a man named Tsutomo Miyazaki committed a rash of incredibly brutal serial killings.

When he was caught, police found that he had an overwhelming collection of manga and anime.

The media was whipped up into a fervor over this connection between “otaku” behavior and horrific murder.

Long after the story eventually died down, the stigma remained.

This would not stand and soon the former president of Studio Gainax (an extremely popular anime production company), Toshio Okada, began to use one of the unique features of Japanese orthography to take back the word for Japanese nerds.

How Katakana Saved the Day 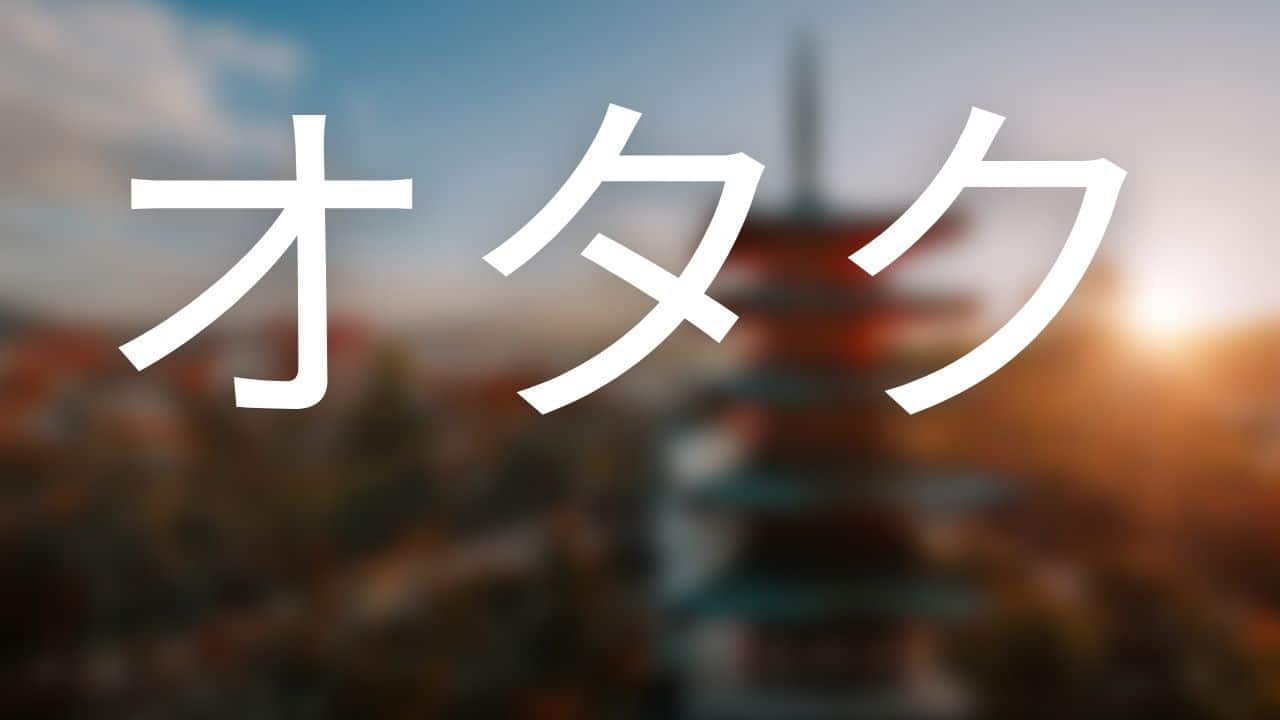 Otaku was originally written as 御宅, with kanji. In this sense, it is a polite way to refer to someone else’s home. As a stigma-filled term for pop culture geeks, it was written in hiragana as おたく.

When Okada got his hands on the word, though, he started to write it with katakana, like so: オタク.

Since katakana is most commonly used either for emphasis or for words of foreign origin (much like italics in English), writing otaku with katakana obscures its Japanese source and emphasizes its cultural nature.

Okada was such a huge cultural influence that his usage spread far and wide. Nowadays, the オタク form is the standard, even when being written in government documents.

The Modern Use of Otaku

While otaku still carries some of its old baggage, it’s a much more widely accepted and used word today.

Not only does the word refer to pop culture fans, but also to people who are fans of other things, like trains, military, music, etc.

In fact, it seems that the word otaku is becoming increasingly destigmatized as the years go on.

Still, it’s probably best to feel out your crowd before proclaiming that you’re a proud otaku.

To use the word in Japanese, you’d just take the thing you love, and attach “otaku” to the end. Just like being a “comic book nerd” or “science nerd.”

The Claiming of Otaku

Otaku began to migrate over to the English-speaking world in the early 1990s on message boards. At the time, most of the negative attributes had carried over.

Otaku were seen as antisocial geeks, spending all their time indoors.

It was even seen as part of a false etymology—since the word originally meant “(your) house,” people thought that perhaps it explicitly was being used to refer to people who spent all their time at home with their manga and anime.

This understanding of the word’s origin is most likely mistaken, though.

Over time, especially as anime fandom has spread through mediums like Toonami, Crunchyroll, and Netflix, the word has lost some of its old sting.

I’m injecting a bit of my own editorial opinion here, based on my research as well as my own use of the word, but I would say that otaku is, nowadays, simply a subcategory of “nerd” or “geek.” It’s an anime and/or manga nerd.

In the same way, that context is important for how the words “nerd” and “geek” are used today, otaku’s positive or negative connotation is highly dependent on context.

Hanging out with other anime fans and want to gleefully call yourself an otaku? Go for it.

Among friends of a similar mind, otaku can be a term of pride, just like “nerd” is today.

Applying for a job at a prestigious Japanese company? Mayyyybe reconsider your choice of words.

In fact, maybe avoid talking about anime and manga altogether.

Final Thoughts on Otaku vs Weeaboo

Generally, being a weeaboo, or a “weeb,” isn’t a great thing. It carries the sense of not having respect for the culture the individual purports to love. It’s a shallow, somewhat grotesque sort of fandom.

Catch yourself slipping Japanese into a conversation? “God, I’m such a weeb.”

Fifth night in a row of Japanese food? “What a friggen weeb I am.”

It’s a way of pointing out your own flaws before anyone else can. All the derision remains.

Otaku, on the other hand, is an almost affectionate term, especially in the right crowds. It expresses a sense of passion and possession of one’s fandom. If you love anime, or manga, or light novels or what have you, if you simply can’t get enough, then you can proudly proclaim yourself an otaku.

You’ll often meet people who still cringe away from these words. “I like Cowboy Bebop… b-b-but I’m not, like, a weeb or some otaku or anything!” That’s fine.

But if you want to spread the charm of the word, reassure them and draw them into your world. “I am an otaku and I love Cowboy Bebop too. What’s your favorite episode?”