There are some expressions that you come across time and again, yet you aren’t sure what they exactly mean. For me, I was never sure what “by the skin of one’s teeth.” It just never made sense to me. How can someone escape “by the skin of their teeth”?

Then, I looked into it and found that the expression actually came from the King James Bible. It was used in a verse, and it means to just barely manage to get something done or to achieve it but by a very narrow margin.

Similarly, another expression I’ve seen several times, especially on formal letters, yet was never sure what it meant was “in a timely manner.”

What does it mean when someone asks you do something “in a timely manner”? And, is it the same thing as asking you to finish it by a specific deadline?

So, I decided to answer these questions and more.

What does “in a timely manner” mean?

To do something “in a timely manner” means to get to it immediately and without wasting any time. The idea is to get the job done in a quick and prompt manner. 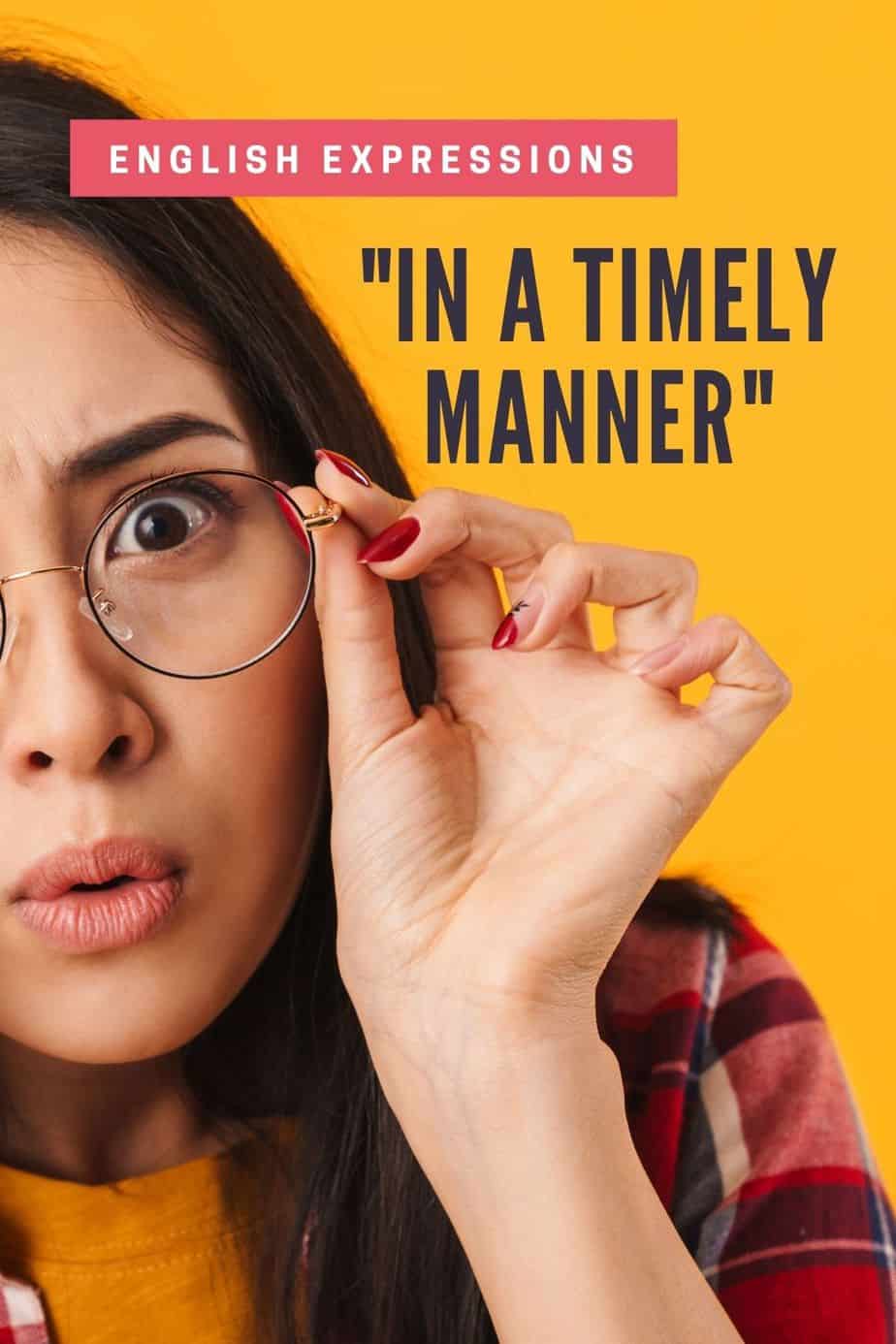 A closer look at “in a timely manner”

As mentioned, “in a timely manner” is another way of asking someone not to waste time. Ergo, it is sort of a request that whatever you’ve asked of them should be done in a reasonable time frame.

An example should clear this up.

Let’s say you take your car to the mechanic and ask them to repair it “in a timely manner.”

Obviously, depending on how severe the damage is, the repair might take from a couple of hours all the way to a few weeks, especially if special parts need to be ordered.

But, let’s say that whatever is wrong with your car should only take a day or two at the maximum.

So, if the mechanic repairs your car in a day or two, then they did their job “in a timely manner.”

Conversely, if you drop by your mechanic a week after handing them your car and they still haven’t fixed it, then it is fair to say that they aren’t doing their job “in a timely manner.”

Here are a few more examples of the expression in use.

A few caveats about “in a timely manner”

For starters, as you might have guessed, “in a timely manner” is usually used within the professional sphere.

This should make sense as it is a little wordy, and some might even call it stuffy. In fact, this stuffiness is why the expression is better used in writing than it is in speech.

They’d probably just laugh at your choice of expressions.

Additionally, it is worth noting that “in a timely manner” does not convey a sense of urgency. It is not the same as telling someone that “this is urgent” or “respond asap.” It is just a request that the person not waste time.

Over and above, you want to be careful about how you use it. Think of it this way, if you ask your friend to get something done without wasting any time, then the implicit assumption there is that your friend usually wastes time.

Ergo, telling someone to do something “in a timely manner” might backfire if they interpret it as you accusing them of taking too long to finish their job.

The simple answer is no, and even though the two are sometimes interchangeable, there are several circumstances where the two are not.

You see, “on time” implies that there is a deadline that needs to be met, but “in a timely manner” simply asks that the other person not to delay the job unnecessarily.

Alternatives for “in a timely manner”

”As soon as the circumstances reasonably permit”

Even though this alternative is a bit wordier, it benefits from relieving any sense of urgency. Moreover, it has a lower chance of being interpreted poorly or offending somebody. That said, its wordiness makes it ideal for formal letters and emails.

We hope that you can finish the task as soon as the circumstances reasonably permit.

”Time is of the essence”

While the first alternative relieved the sense of urgency, this one heightens it. It is closer to asking someone to do something “as soon as possible,” yet it also still isn’t as demanding.

Please finish the job, and remember that time is of the essence.

It is worth noting that this alternative isn’t as wordy as “as soon as the circumstances reasonably permit.” Yet, it still belongs in a professional setting, and I personally wouldn’t use it outside of an email.

”As soon as possible”

“As soon as possible,” which is commonly shortened as “ASAP,” heightens the sense of urgency. This alternative is also a bit informal, which is why it should be reserved for colleagues and friends. That said, you can use it or its abbreviation in speech.

Hey buddy, can you finish your part of the project as soon as possible?
I’m gonna need you to start working on the deliverables asap.