The gaming community has given us countless words and expressions to use in our daily lives.

Some of these expressions have been obscure and esoteric, such as the expressions that have come out of the Twitch community.

For instance, unless you are talking to someone well versed with Twitch culture, it is almost impossible to use terms like “Pepega” and “Poggers” in a normal conversation.

It would just leave the other party scratching their heads in confusion.

On the other hand, some terms have easily migrated into the mainstream. For one thing, these terms don’t seem strange or bizarre. They seem like simple English used in a novel way.

Additionally, they are easily understood and don’t require a master’s in meme history to be used in a conversation. An example would be the term “glass cannon.”

What does “glass cannon” mean?

“Glass cannon” is used to refer to characters or objects that are extremely powerful offensively yet are also extremely weak defensively. Obviously, the most common usage would be within action games where you care about the offensive and defensive powers of a character. A similar, almost synonymous term is “glass dragon.”

A closer look at “glass cannons”

The expression is composed of two components.

On the one hand, you have glass, which implies frailty and brittleness. After all, it doesn’t take much for glass to break. And, this explains the weak defense part.

On the other hand, “cannons” are known for their offensive power.

In fact, cannons are known to have changed naval warfare because their sheer power allowed ships to destroy each other from a distance.

Hence, this should explain the strong offense part.

And, when you combine the two, it becomes pretty clear, almost intuitive, what the expression means.

Where are “glass cannons” found?

You can find “glass cannons” in fighting games as well as Role Playing Games, RPGs for short. In fact, some characters will be known to take a hit like a chump and that will be a sort of defining trait.

So, which characters tend to be glass cannons?

Well, in RPGs, it’s usually the wizard or mage. For instance, in Diablo 3, many would argue that demon hunters and wizards can be classified as “glass cannons.”

You see, the problem with wizards and mages is that while their magical attacks are strong, they can’t stand a physical attack.

Granted, the wizard might have excellent defenses against other magical attacks, but they have almost no defense against any physical attacks.

Alternatively, brawler characters may be strong physically and may be even able to stand a physical attack, yet they tend to buckle quickly from any magical attack.

Other character classes that can be considered “glass cannons” are archers and artillery units in strategy games, which can either be real-time strategy or turn-based strategy.

And, this makes sense as archers and artillery units are not built to take damage in the first place. They are built to be placed far away from the battlefield while still attacking enemy units.

In real life, there are several instances when something can easily be classified as a “glass cannon.”

If an athlete who plays a contact sport can dish out punishment but can’t take it, or if they have excellent stats but are injured for half the season, then they qualify as “glass cannons.”

And, military weapons or vehicles that have enormous destructive potential but crumple up like paper from any attack can be called “glass cannons.”

Here are a few examples to see the expression in action.

That new boxer is such a glass cannon. He has a devastating right hook, but it doesn’t take much to knock him out.

In Magic the Gathering, which is a card game, there are combination decks that can be considered glass cannons. If the combination goes through, the holder of the deck is almost guaranteed a win.

Conversely, if the combination is countered or disrupted, the holder will most certainly lose as they will have no way of recovering.

This new fighter aircraft is glass cannon. It carries a wicked payload and is almost faster than anything in our airforce, but its defenses are almost non-existent. 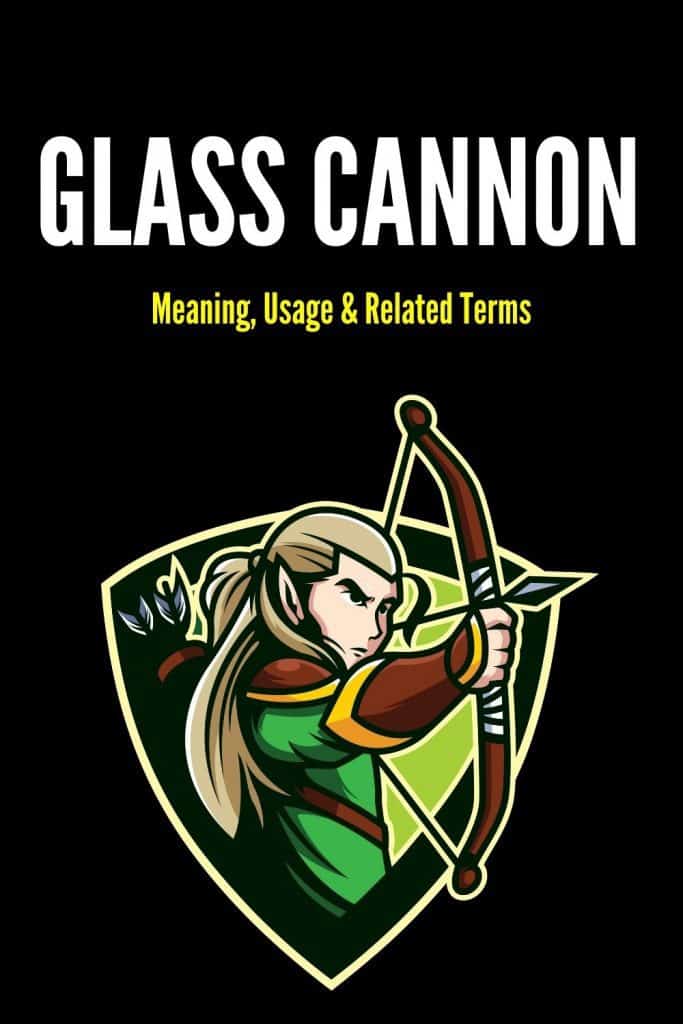 The Definition of a Glass Cannon

Not all “glass cannons” are made the same

It’s interesting to note that the concept of a “glass cannon” has given birth to several other related concepts.

For example, in a game, if a boss can be considered a “glass cannon,” then said boss is called a “rush boss.” These are the game bosses that can kill your character quickly but don’t take much to be defeated themselves.

And, just because a boss is a “rush boss,” it doesn’t mean that they are easy to defeat. Nevertheless, most “rush bosses” can be fun to play against.

One sub-type of rush bosses is the time-limit boss, who defeats the player after a short time limit.

It is also worth noting that a boss that dies quickly but can’t take you down quickly is not a “rush boss.” These are known as “breather bosses” or “anticlimax bosses.”

At the extreme, if a character’s defenses are so bad that it all takes to defeat them is a single hit, then these characters are considered “one-hit point wonders.”

This was the case for most video game characters in old video games, especially the ones that were known as Nintendo Hard. But, to balance this out, these characters were given multiple lives.

And, when two “one-hit point wonders” go up against one another, you end up with a “rocket-tag gameplay,” where the first player to tag the other wins.

“Stone walls” can take plenty of damage but can’t inflict much onto their opponent. And, when a “stone wall” gets taken down, most of them can recover quickly.

Plenty of “stone walls” take the strategy of turtling, where they delve into a war of attrition with the enemy, knowing full well that the enemy will either tire out first or make a mistake that can be capitalized on.

“Stone walls” also go by other names, including “tanks” and “meat shields.”

In fact, in team games, “stone walls” are responsible for “tanking” duties, and a “stone wall” that has minor healing magic and defensive buffs is known as a “paladin tank.”

“Fragile speedsters” are characters that can move quickly and strike their opponent before they even see it coming.

They are also good at dodging enemy attacks. However, these characters are also very weak defensively, making them fragile.

Because of their characteristics, “fragile speedsters” are suited for sneaky roles, making them ideal as thieves, ninjas, or any other role that requires speed.

As mentioned earlier, “long-range fighters,” such as archers and artillery, are usually glass cannons. They are also poor fighters when things get up-close and personal.

This is a character that sacrifices speed for strength. It can take plenty of punishment and can dish it out as well. But, it moves at a glacier’s pace.

And, given that the “mighty glacier’s” speed is low, it can’t evade oncoming attacks, emphasizing all the more the need for high defensive capabilities.

Other interesting expressions worth pointing out

Before leaving, I thought that there are two more expressions worth talking about.

When a boxer is described as having a “glass jaw,” the implication is that they knock out easily. It just takes a single punch to do the trick.

Again, the expression comes from the frailty of glass, so the idea is that a single punch could break their jaw.

The fighter from yesterday went down after a single punch. They have nothing but a glass jaw.

When something is described as a “loose cannon,” the implication is that this thing is a danger to itself and everybody else around it.

However, interestingly, the expression doesn’t come from the firing power of cannons. Instead, it was borne out of the dangers of having a loose or unfastened cannon on a ship.

This cannon could easily hit any of the sailors on board or even damage the ship itself.

Now, you should understand why people who are described as “loose cannons” tend to pose a danger to others around them.

I don’t like working with him. He’s such a loose cannon.