Sometimes, we get caught up with deciding which expressions should be used in certain conversations.

We could get nervous when talking with strangers which could lead to unintentional cringeworthy remarks called “faux pas.”

In business-related discussions, things could get awry when we misconvey our thoughts, which is quite compromising.

So now, let me lay down how to use “See you then” effectively, particularly in business situations.

Is “See you then” a valid phrase in business correspondence?

For starters, some considerations have to be taken when using “See you then” in business-related discourse. This expression is more appropriate when used in less formal situations like socializing with familiar colleagues. However, although possible to stay casual, it is much better to increase the formality of the verbiage when writing emails, or when dealing with superiors and prospects for the first time, so as not to attract personality “misjudgments.”

The meaning of “See you then”

“See you then” is the truncated or shortened version of “I will see you then,” having the subject “I” and the modal verb “will” dropped for convenience.

When expressions are used too frequently, they tend to become a natural part of our linguistic repertoire, without causing any grave misinterpretation.

Deliberately omitting minor parts of the sentence to avoid redundancy, and especially when the meaning is clear enough, is called “ellipsis.”

In ellipsis, the meaning of the omitted words becomes insignificant because of being readily implied by context.

One notable characteristic of the informal language is its dependency on context, implicatures, and message briefness.

This implies that “See you then” falls within the spectrum of casual register rather than the formal.

“Then” in the expression functions as an adverb that denotes an implied meaning of a future time.

We can, therefore, use the statement upon reaching an agreement with another party to meet at a certain time in the future.

Person A: It’s been great talking with you. But, I have to go pick up my son now. See you next week!

Person B: Alright, take care. See you then!

As you may notice in the dialogue, “See you then” is used as a response to the statement “See you next week.”

This means that “then” corresponds to the previous adverbial phrase “next week.”

Thus, “See you then” is a common remark used in ending a conversation between two individuals, or simply a form of goodbye verbiage. 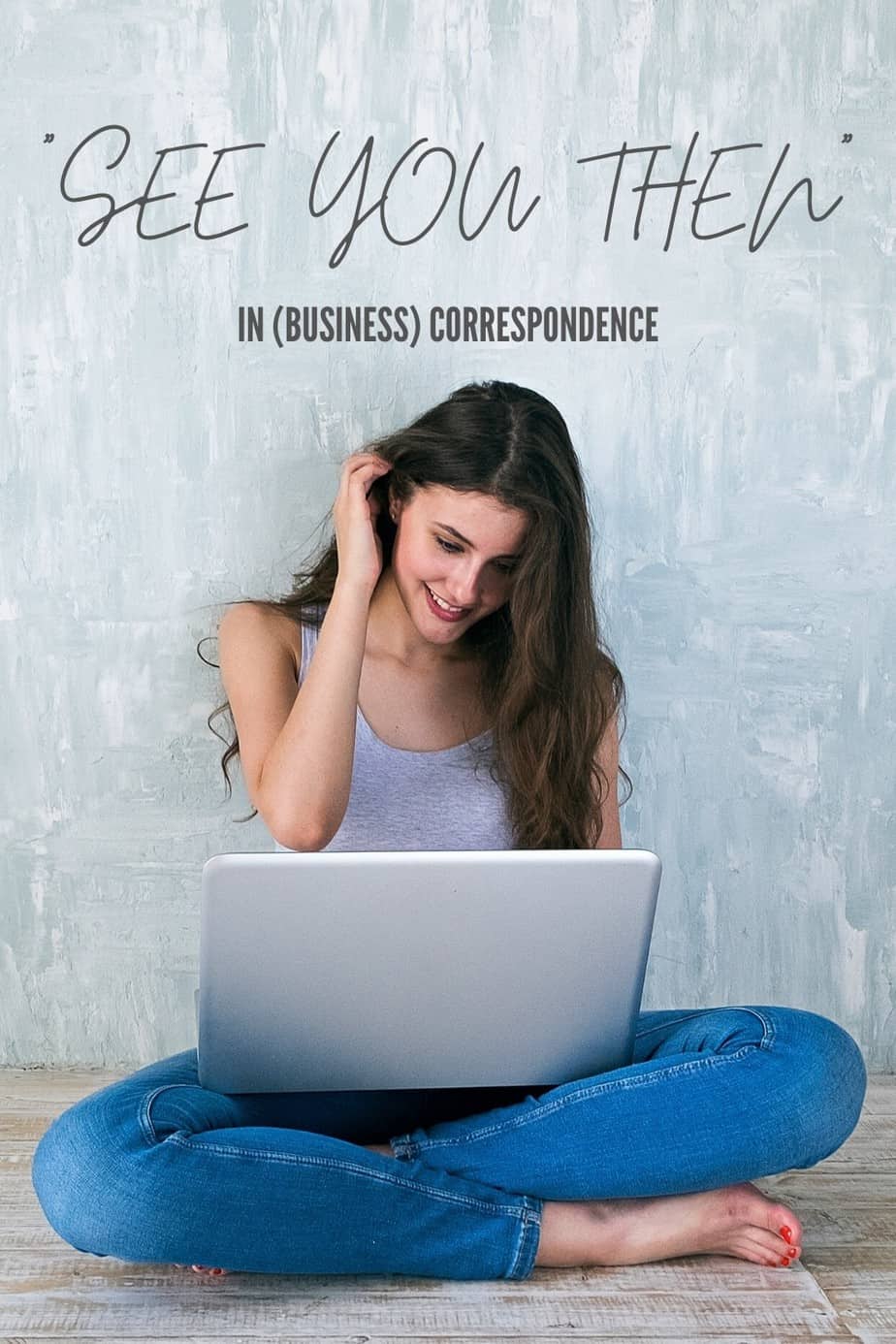 How can I say “See you then” formally?

The formal register is essential in business correspondence because it represents a civilized and polite manner of speaking. 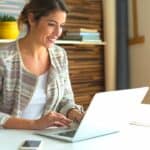 “As per our conversation” in Business Correspondence 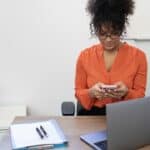 “Per Usual” in (Business) Correspondence 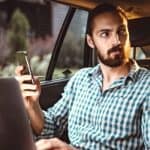 “Thank you for your attention” in (Business) Correspondence 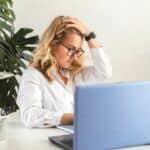 10 Ways to Use “Please Advise” in Business Correspondence

We code-switch to various language styles depending on the relationship we have with the other interlocutor, as well as the environment where the conversation occurs.

As mentioned briefly earlier, we likely use less formal language in talking with familiar people, such as friends, family members, and peers.

On the other hand, we tend to increase the formality of the language when talking with authority figures, including clients, superiors, teachers, and even strangers.

The formal register is vital in expressing less obscure information since it is represented by syntactic and pragmatic completeness.

“I will see you then”

The easiest way to increase the formality of the expression is by adding the missing words at the beginning.

So instead of saying “See you then,” we can say “I will see you then.”

Person A: Thank you for your participation in today’s meeting Mr. McKinnon. We look forward to our second discussion next month.

Person B: It’s my pleasure being here. I will see you then.

Using the complete form of the expression nonetheless adds some form of personal touch of commitment in the utterance.

“I look forward to meeting you”

Another more formal equivalent expression is “I look forward to meeting you,” which is more appropriate in writing.

Albeit wordy, it would be much better to phrase it this way if the intention is to increase the degree of formality of the message, as opposed to only saying “See you then.”

To “look forward” means feeling some warmth or pleasure towards a forthcoming event or activity.

This expression is also one of the most-commonly used closing remarks in invitations, probably even more like a “go-to” statement in business writing.

We would like to invite you as one of our guest speakers in the upcoming regional conference for local investors spearheaded by the National Investors’ Organization.

We believe your success in the field will help inspire the new market leaders in the industry. Your gracious presence would ultimately make the entire event vibrant and engaging.

We look forward to meeting you soon!

What are other some alternatives for “See you then?”

In less formal instances, for example, a non-businesslike talk with a familiar colleague at the pantry or arranging future events with friends, other phrases can also be used.

These synonymous casual expressions are “See you soon,” “See you later,” and “See you next time” which are also used at the end of the conversation.

Let’s look at some examples of how to use each of these.

To note again, the adverb “then” in “See you then” denotes a future time whose exact meaning is dependent on the flow of the dialogue.

Changing “then” to “soon” prompts the hearer with a more immediate interpretation since it is identical to saying “shortly.”

Using this phrase could also imply that the speaker is much interested in meeting the other interlocutor sooner rather than later.

Person A: I’m really excited to start with our yoga classes this weekend. Can’t wait to hang out with you.

Person B: Me too! See you soon!

“See you later” could also be a related variant to “See you then,” although the usage and interpretation of this particular phrase may vary a lot in different circumstances.

One typical way of using this phrase is when bumping into a friend inside the campus and simply greeting each other quickly.

It can be used as a response to a casual greeting wherein the likelihood of seeing each other again at a later time within the vicinity is high.

Person A: Hey, Mark! I haven’t seen you recently. Where have you been?

Person B: Yeah. Actually, I just got back from a short trip to Canada.

Person A: Wow, awesome. Anyway, I gotta run for my next class. See you later!

See you next time

One last similar expression is “See you next time,” which has the least probability of the event happening again anytime in the near future.

We can say “See you next time” when we do not exactly know when to see the other person again, thereby creating an “indefinite” time-frame interpretation.

For instance, we might say this if we wish to reconnect with the other party after having an initial contact.

Person A: It was great hanging out with you and your friend Jerry tonight. Hope to see you again!

Person B: Thanks for having us. See you next time!

Also, another common way to use “See you next time” is after someone cancels attending a scheduled event.

Person A: Hey, I know I agreed to be at your party tomorrow. Unfortunately, I need to do something more urgent which is work-related. I only knew about it a while ago. I’m so sorry.

Person B: Oh, that’s alright. I understand. See you next time!

How can I respond to “See you then?”

Most of the time, “See you then” is used as a final remark to say goodbye in conversations, so we need not reply to it in most cases.

However, a short and simple response could be done if we feel the need to do so.

This could happen in conversations wherein we tend to feel obliged because we may have caused unintentional disappointment toward the other party.

Person A: Miss Stacy, I’m sorry but I cannot attend our piano lesson this Sunday because we are visiting my grandparents in Idaho. We’ll be back by Wednesday, so see you next weekend instead!

Person B: That’s okay, Josh. I understand. Thank you for informing me in advance. See you then!

Person B: Thanks for understanding, Ms. Stacy. See you!

Using “See you then” is mostly applicable in informal to moderately formal scenarios wherein the interlocutors share a familiar or intimate relationship.

It is a frequently-used closing remark in conversations that aims to express goodbye, meanwhile wishing for another contact in the future.

On the other hand, more formal equivalent expressions are to be used in professional settings to express a higher degree of civility and politeness, to prevent misconceptions, as well as faux pas.