What is the meaning of GOAT in the NBA?

In the National Basketball Association (NBA), GOAT is an acronym for “Greatest of all time”. The term GOAT is used in all kinds of sports as an honorable title for the greatest player to ever have done it. When talking about the GOAT, the question is, therefore, not who is the best player right now, but who is the best player in the history of the sport.

To put it plain and simple, it doesn’t matter. You will find both of these. Depending on the context, it might make sense to write G.O.A.T to make everybody understand that you are talking about the Greatest of all time rather than an actual goat.

However, how many real goats are playing in the NBA? Well, there you have it 🙂

So, this all just begs the question… 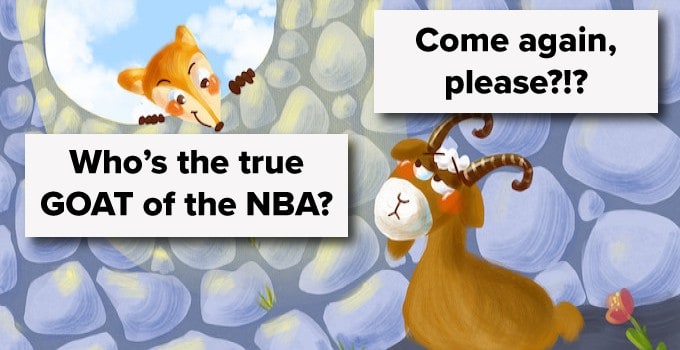 Well, that is a hard one. And the NBA obviously does not award any player with a GOAT award. So it is entirely up to the public and all the fans, who the actual GOAT of the NBA is. Some names that you’ll regularly hear in GOAT conversations include:

Most people would probably agree that Michael Jordan is the actual goat of the NBA. However, people obviously often tend to see an active player as the GOAT because that is what they can relate to most. That kinda makes sense, right?

Some fans, especially younger ones, might see Kevin Durant as the GOAT, as they have never really seen Michael Jordan play.

Another factor that favors NBA players from the latest era is obviously the fact that every sport, the NBA included, always evolves. So it might be harder to score 30 points in 2019 than it actually was in 1999. I guess you get the idea.

So who do YOU think is the GOAT in the history of the NBA?