The daily affairs of human beings entail the inevitable need for social interactions which, in turn, call for various communication strategies.

Our linguistic repertoire is loaded with retrievable language patterns whose expression is dictated or reinforced by various circumstances.

One utterly common situation that prompts a particularized statement response is the act of favor or kindness provided by another person.

This act generally induces the conveyance of gratitude verbiage either in the spoken or written language.

Thus, this post aims to shed light on the nuances of the fairly casual expression “Thank you for the heads-up.”

What is meant by “Thank you for the heads-up?”

“Thank you for the heads-up” is a fairly informal gratitude expression typically used as a response after a warning or caution is given by another person. It is a less formal equivalent of “Thank you for the advance notice,” which can also be expressed by saying “Thanks for tipping me off” in more casual scenarios.

How do we use “Thank you for the heads-up” and for what reasons?”

A “heads-up” is an informal compound noun simply denoting the meaning of an advance notice given towards a person for preparation purposes.

This means that a person providing a heads-up to another person shows some form of empathy, concern, or support.

Furthermore, the warning initiator is propelled by the intention of positively influencing the welfare of another person, which is generally why the caution is given ahead.

Albeit classified as an informal term, “heads-up” is also commonly used in business correspondence, especially in spoken conversations.

Since the connotation is nonetheless informal, it would be more appropriate to use this expression in relatively casual business discourse.

That is, casually talking with familiar people in the business setting, such as colleagues within similar positions or within the same department.

Obviously enough, “Thank you for the heads-up” may also be applied even in more casual atmospheres, such as in conversations between or among friends, peers, or family members.

“Thank you for the heads-up” in business conversations

“Thank you for the heads-up,” albeit containing an informal connotation, may be used in business conversations.

This is especially true in oral communication between colleagues who are rather familiar with each other.

For instance, two colleagues are having a conversation on the newly-added security measures in the office, such as in the next dialogue.

Colleague A: Hey, you’ve been on sick leave for the past couple of days, so I thought I should tell you some news. Surveillance cameras will be installed in the pantry this weekend and they are going to be operational by Monday next week.

Colleague B: Oh, I really had no idea about this. Thank you for the heads-up!

The first colleague is interested in providing relevant information to the other colleague who has been unable to receive updates, hence the intentional act of sharing awareness.

As a form of reciprocity to the information provided, not to mention the concern shown by the message initiator, the second colleague responds with the appropriate gratitude expression.

“Thank you for the heads-up”  in personal messages

This subsection aims to provide a more casual example of how to use “Thank you for the heads-up,” particularly in direct messaging tools.

The advent of technology has revolutionized the way people communicate with one another.

It has significantly affected the accessibility of information notwithstanding international borders.

The idea of expressing gratitude after someone provides new information, a warning, in particular, remains intact even in direct messaging.

Say, for example, a friend or a family member from another country informs that an infectious disease is spreading in their location, which may essentially spread worldwide in no time.

Person A: There’s been some viral infection in our area and it’s spreading like the wind. Please be careful back there in our hometown because this is likely going to spread worldwide.

Person B: That’s horrendous! Please stay safe all the time. Thank you for the heads-up.

The first person is utterly concerned about the welfare of the other person which leads to the advance caution given.

Meanwhile, the second person, who is highly likely a relative or a friend, expresses gratitude towards the person by using the verbiage being discussed.

Although “Thank you for the heads-up” is typically used in situations wherein a sense of caution is implied, it is not limited to these cases alone.

Other forms of informative data given in advance for the sake of sharing relevant updates may also prompt other alternative forms of gratitude verbiage. 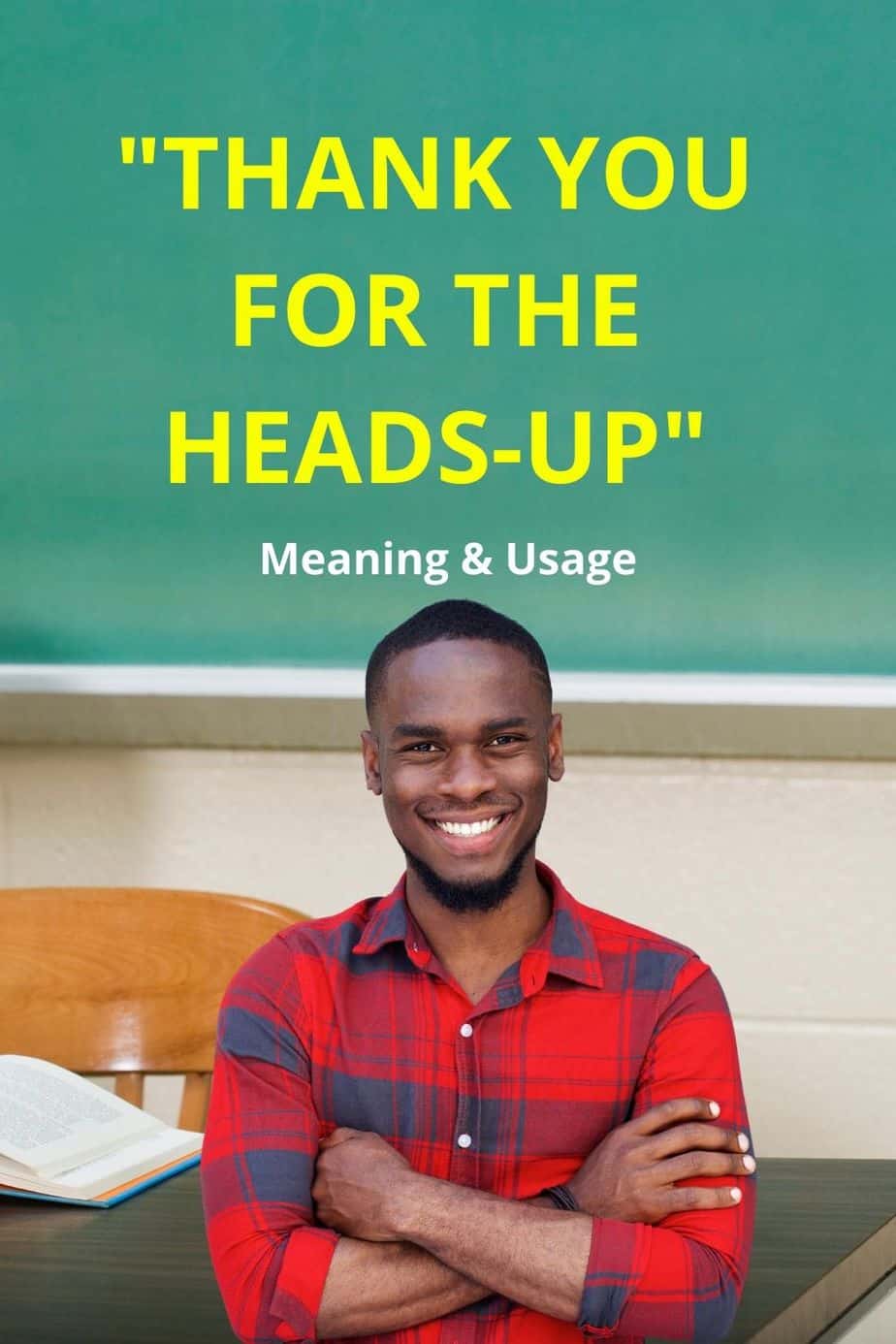 Alternative expressions for “Thank you for the heads-up”

In fact, “Thank you for the heads-up” has other equivalent expressions in both formal and informal registers.

At least for the sake of this post, the formal register includes, but not limited to, business emails, notices, and memoranda.

Whereas, the informal register constitutes casual message exchanges and conversations between or among people with intimate relationships.

The example listed below is particularly observable in the formal written business documents.

Since the noun “heads-up” has a relatively colloquial connotation, the statement can be paraphrased into more formal variations instead.

Thank you for the advance notice

Although some would argue that the phrase “advance notice” is quite superfluous, it is still widely used in business correspondence.

This may have unintentionally become a pattern, or simply done out of the desire to elicit pragmatic and syntactic completeness in formal writing.

When we receive emails stating and explaining a certain change to a previous agreement, such as a meeting schedule or location, a possible response would be “Thank you for the advance notice.”

Doing this also serves as a confirmatory act that the information or update has been successfully received and acknowledged by the intended recipient.

Therefore, this is vital in preventing miscommunication or misinformation in the business setting per se.

The colloquial language which is used in the informal register is applicable in circumstances where friendliness is more valuable than tact and civility.

This kind of language is used by people with a relatively familiar or intimate bond, thereby eliminating the necessity of expressing language at length.

The informal register readily makes use of slang, jargon, phrasal verbs, dangling prepositions, ellipsis, idioms, and so on, which are mutually understood by the interlocutors.

Thanks for tipping me off

An informal equivalent of giving a heads-up is to “tip someone off.”

To “tip someone off” is an idiomatic phrasal verb that means to supply a piece of information, usually confidential, to alert another person in advance.

As a result of the advance information, the intended recipient is then able to prepare for possible outcomes, may it be favorable or not.

For example, a guy informs his best friend that his ex-girlfriend is coming to the party they are going to attend.

The act of sharing this kind of awareness toward another person indicates that the informant knows the history of the message recipient.

The message recipient may then be able to prepare ahead for the upcoming event, which would likely create an emotional impact on the people involved.

The act of gratitude is not strictly limited to the explicit expression of reciprocity using words or statements alone.

Gratitude may also be done in the form of compliments, gift-giving, or even physical gestures like a nod or a sincere smile.

No matter which approach is chosen, it is nevertheless inarguable that gratitude plays a pivotal role in maintaining sustainable societal relationships.